No Planes To Send For Dying Haitians 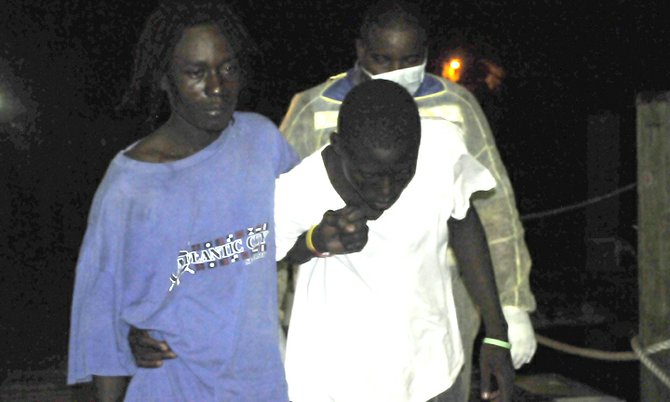 THE Defence Force knew about the 40-foot Haitian vessel that capsized in waters off Exuma as early as Friday, but could not locate it until days later – by which time 30 migrants had drowned – because none of its reconnaissance aircraft are operational, The Tribune understands.

International media, including the New York Times, are reporting on the disabled Defence Force planes, which have reportedly been out of action for weeks.

At least 30 Haitian migrants drowned and 110 were rescued, 19 women and 91 men, after their vessel ran aground near Harvey Cay. It was initially thought the sloop was headed to the United States, but survivors claimed they were head for New Providence.

Many of those who drowned were said to have attempted to swim or float on pieces of wood to land after the sloop began to break apart.

Royal Bahamas Defence Force Lieutenant Orgin Deleveaux said fishermen first spotted the Haitian vessel on Saturday, but after two days of searching in a go fast boat and another RBDF vessel, marines could not locate the sloop.

In fact, it was not until six of the migrants managed to make it ashore on a raft Monday afternoon that the RBDF called the US Coast Guard to assist in the search.

About an hour after deploying a helicopter, the Coast Guard found the boat 15 nautical miles from Harvey Cay – 20 miles from where the fishermen first reported seeing it.

“All three of the Defence Force planes are out of service and have been for a few weeks. We used our boats to look for the Haitian vessel on Saturday and Sunday. At that point it was not a search and rescue exercise, it was a search for undocumented migrants. Yes, the planes would have assisted in the sighting, but in terms of the dynamics of the exercise, it would not have been able to assist,” Lt Deleveaux said.

“We need helicopters, we don’t have any. We have been given a search and rescue mandate which requires us to have certain equipment that we do not have, but we understand the economic contrast so we work with what we have. When we got the call that a vessel was sighted we acted right away, but when we got there we could not find the vessel because of weather conditions and the depth of the water. So we need the helicopter to assist us.”

Early yesterday morning, the 110 rescued migrants arrived at the Coral Harbour base and were turned over to the Department of Immigration for processing.

Defence Force officials as well as members from the US Coast Guard continued their search efforts today, but Lt Deleveaux said they were only able to rescue one other person, but could not recover any of the bodies that were still at sea.

“We still continued recovery efforts today at first light however, we incurred some weather. We still conducted an extensive search, but yielded negative results as it comes to getting the other 20 or so bodies. We picked up six yesterday, but did not find anymore today,” he said.

“With the assistance of the Coast Guard we located an additional survivor who was noted to be a part of the original group.”

Lt Deleveaux said he is unsure if the search will continue today.

Meanwhile, he said, they got word that another Haitian vessel was spotted in the Ragged Island Cays – with between 30 to 60 people on board.

Lt Deleveaux said the Defence Force hopes to intercept the boat and have those migrants in custody by today.

Foreign Affairs Minister Fred Mitchell, in a statement, said the Ministry is disturbed and saddened by the loss of lives.

“This tragic story continues with too much regularity despite strenuous efforts to stop and discourage it. This

is a human tragedy. The government is seeking to hold urgent talks with all the surrounding stakeholders and governments within the next few days with a view again to taking additional measures to discourage the smuggling of human beings through Bahamian waters,” the statement said.

“In the mean time, we again urge people not to take the risky journeys on the high seas which too often lead to the loss of life and the tragedy that occurred in the Exuma Cays.  We will seek to take additional measures to seek to prosecute those who are responsible for these illegal journeys.”

So sad, the Bahamas government can't get a helicopter but can plan for festivals, take trips costing thousands of dollars, and double dipping to say the least. In the meantime, as stated above they were headed to New Providence, which means if they had made it, another 140 or so would have invaded Nassau illegally!!

We can repair the big tug ,can,t keep the planes flying ,but B ,the funnel ,Bethel and now his son can travel all over on our dime .geez now even the bagmen get five star treatment from the treasury ..

My God no wonder this country is sinking when no one gives a damn about human lives lost. It's almost like people and this government are HAPPY that human beings DIED. Rather than work on a meaningful solution with the government of Haiti that might result in something positive. And where is the concern that RBDF planes are inoperative. What the heck is happening here. Our borders are obviously open to any and everyone including drug smuggling criminals. No wonder our crime rate is out of control.