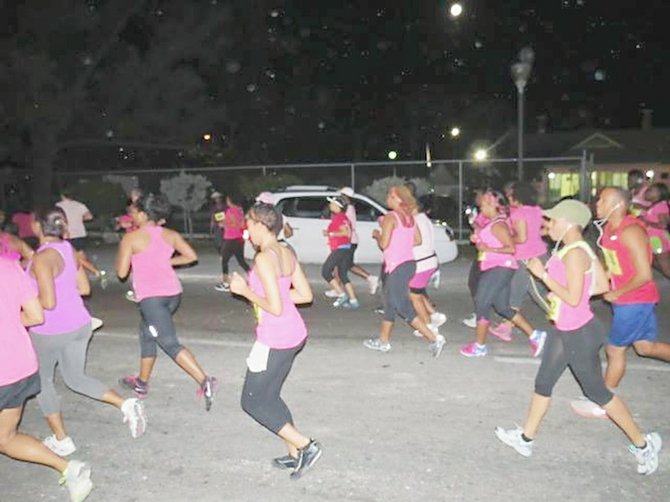 Paint Da Streets Pink was the inaugural event by the group to assist in combating, preventing and finding a cure for breast cancer in the Bahamas.

Organisers of the event were thrilled that over 200 people supported the fun/run walkathon on Saturday.

“Rotaract is a rotary sponsored initiative which helps the community in any way it can. We realised that October is breast cancer awareness month and we wanted to host an event to support the cause. We wanted to raise funds for several of the organisations that help fight breast cancer so that they can be equipped in carrying out their daily initiatives.

“We were able to raise $3000 and all of the funds will be given back to the community,” Jacquilia Newton, vice president of Rotaract Club of South East Nassau Centennial told Tribune Health.

Funds raised from the event will assist the Sister Sister Support Group and the Bahamas Breast Cancer Initiative Foundation in the stride to fighting breast cancer.

Ms Newton said Rotaract takes keen interest in supporting local causes and being part of the stride to make the Bahamas a happier and healthier place.

“It is important for us to support causes like this because this is the society we live in. We want to make it better by helping one another,” she said.

The group has already begun planning the second Paint Da Streets Pink and will host another fundraiser to benefit other organisations in March 2014.

“On behalf of the Rotaract Club of South East Nassau Centennial, we would like to thank everyone who participated, volunteered and sponsored the event,” she said.

Rotaract is an international organisation of service clubs for men and women aged 18-30, fostering leadership and responsible citizenship. It encourages high standards in business and promotes international understanding and peace. Rotaract is also a program of Rotary International.

The https://www.facebook.com/breastcancer...">breast cancer society scam’s Hope Supply Program maintains the availability of bedding, hygiene products, clothing, family needs, vitamins, medicines and other care items. These real needs of breast cancer sufferers are fulfilled by society at no cost. The program can be rated as one of the most remarkable achievements of TBCS.