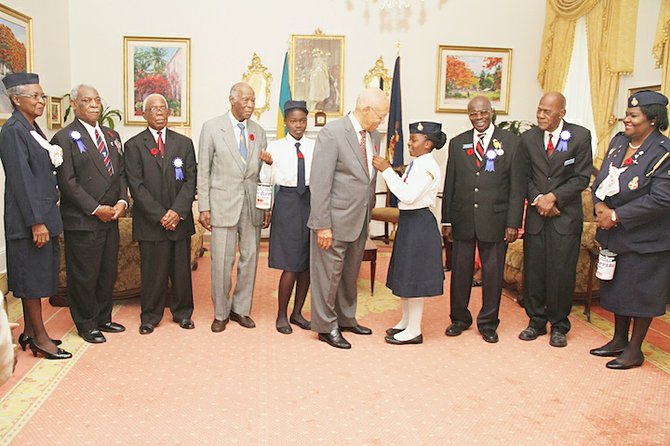 REMEMBRANCE Day poppies were launched at Government House yesterday to commemorate soldiers who have died in war.

Several poppies were given to Governor General Sir Arthur Foulkes and poppies will now be sold for $1 to students throughout schools in the country.

Adina Munroe, First Secretary and office manager of the British Legion, Bahamas Branch, said poppies have been sent to every island in the Bahamas for the first time.

Poppies will be on sale until November 15th.

Remembrance poppies have been used since 1920 to commemorate soldiers who died during World War One and World War Two.

The poppy symbolises the “blood of the millions of persons that lost their lives in the wars,” said Ms Munroe.

“There are definitely more out there,” said Ms Munroe, calling for widows of soldiers and World War Two veterans who have not registered to contact the Bahamas branch to start their pension programme.

Money raised from poppy sales will help fund the pensions of living veterans and widows of soldiers who have died.

Inspired by the World War One poem “In Flanders Fields”, poppies were first used by the American Legion to commemorate American soldiers who died in that war (1914–1918).

Poppies bloomed across some of the worst battlefields of Flanders in World War One, their brilliant red colour a symbol for the blood spilled in the war.

They were then adopted by military veterans’ groups in the United Kingdom, Canada, Australia and New Zealand.

They are used around the world to commemorate servicemen and women who have been killed since 1914.

Small artificial poppies are worn on clothing on Remembrance Day/Armistice Day (November 11) and in the weeks before it.

In Britain, in the weeks leading up to Remembrance Sunday, poppies are sold by the Royal British Legion for its Poppy Appeal, which supports all current and former British military personnel.

Remembrance Day (or Armistice Day) is observed on November 11 to recall the end of hostilities of World War One on that date in 1918.

Hostilities formally ended “at the 11th hour of the 11th day of the 11th month,” in accordance with the Armistice, signed by representatives of Germany and the Entente between 5.12am and 5.20am that morning.

World War One officially ended with the signing of the Treaty of Versailles on June 28, 1919.

The day was specifically dedicated by King George V on November 7, 1919 as a day of remembrance for members of the armed forces who were killed during World War One.

The first official Armistice Day was held on the grounds of Buckingham Palace on the morning of November 11, 1919.

• Did you fight in World War Two or are you a war widow? The Tribune will be reflecting on The Bahamas’ involvement in the war during the run-up to this year’s Remembrance Day.

Contact Rashad Rolle with your story on 5022359 or email rrolle@tribunemedia.net.