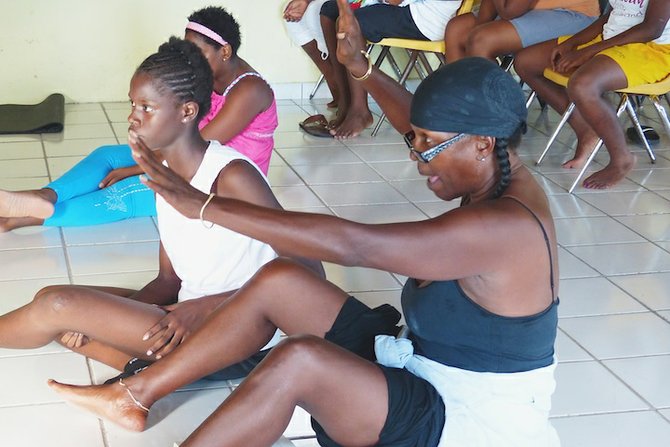 Ms Poitier, a resident of the island, where her father spent his early years, has taken on 14 acting students in North Cat Island.

Through the classes, the high school students and one teacher are being taught one of today’s most successful acting methods.

“I decided to teach these classes to share my knowledge of Strasberg’s acting method that I learned from Lee Strasberg himself and then was asked by him to teach in his school in New York City,” Ms Poitier said.

“I believe that there are many more talented people in the Bahamas like my father, Roxy Roker and Esther Rolle, who only need instruction and an introduction to a technique that will hone their skills.

“I believe the Strasberg method is a brilliant way to learn acting by learning about your instrument, you, your body, your humanness.”

In order to play any character, she said, one must first learn about oneself.

The classes also help individuals relax and cope with stressful situations both on stage and in their personal life.

Ms Poitier thanked Bahamas Film and Television Commissioner Craig Woods for his assistance with the classes. The Commission provided financial assistance for students who could not afford the classes.

The class will demonstrate their talent at a performance at a later date, Ms Poitier said. Meanwhile, she said she also has some general aspirations for performing arts in the Bahamas.

“Of course I have many hopes and dreams, such as I’d like to see theatre companies on every island that is inhabited in the Bahamas,” she said.

“This would fulfil the precious need for arts and culture, created as family entertainment on the Family Islands, which will promote that island’s history and heritage as well as create a touring theatrical event on every island from other islands.

“I am hoping to create an Indigenous Arts & Science Summer Camp in Cat Island next summer when I find the funding and name it after my dad as the inspiration and role model many of us can follow to success.”

Ms Poitier said funding is always the key to the longevity of any project because it enables advancement to continue.

She welcomed the continued assistance of the Ministry of Tourism and the private sector to make the classes available to residents and tourists who want to learn the arts and sciences on the island where Sidney Poitier grew up.

The ‘method acting’ classes on Cat Island are four hours per class. There will be a total of 10 classes in the course which is scheduled to end in November.

Ms Poitier said she believed her late cousin, Jackson Burnside, was right when he once said that by 2020, more people will come to the Bahamas for art, culture and heritage than for sun, sand and sea.

She looks forward to the accomplishment within the next six years.