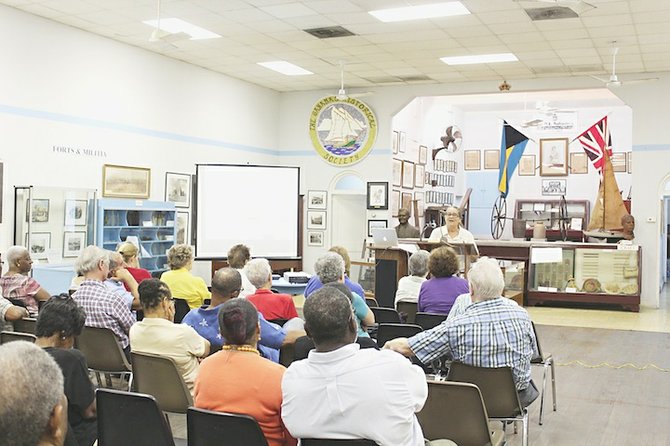 ANN Lawlor’s exploration of the Bahamian vernacular in a new research paper points to the roots of popular expressions often dismissed as dialect or bad English. In line with research into the Jamaican language, Ms Lawlor says expressions such as “I gun go to da shop”,  “Dis ein yawnz”, or “I das eat conch erry day” represent a Bahamian vernacular with creole origins spoken almost naturally by most Bahamians.

Although the official language of the Bahamas is Standard English, the language spoken by most Bahamians is Bahamian Creole English. She presented a research paper “Language Migrations: Roots of Bahamian Vernacular” last week during the Bahamas Historical Society monthly talk.

Ann Lawlor and her husband Jim Lawlor president of the Bahamas Historical Society started researching the subject in 1985 for a paper she presented at the Caribbean Linguistic Conference in Trinidad and Tobago. She has continued to research the subject.

As a lecturer at the College of the Bahamas Ms Lawlor has taken students to nearly every Family Island as part of the second level Linguistics Course 405.

Lack of knowledge have made people mock, shun and pass the language off as bad English. Ms Lawlor said the language should be appreciated and celebrated.

“Some parents may tell their children they are not supposed to speak that way or the way they may phrase something is bad English. But it is not bad English because it is not English at all. It is Bahamian Creole English and we must celebrate this language and appreciate it. It is not something that we should be ashamed about either,” she said.

Mr Lawlor said: “The research and presentation to the public is important because it opens the possibility of Bahamians discovering more about their identity. The language spoken by most Bahamians is Bahamian Creole English and not a dialect of English. Therefore the Bahamian Creole English is unique and should be treasured as an integral part of Bahamian culture. The difficulty for many students is the interference of their first language in education which has the goal of performing in Standard English.

Ms Lawlor said the findings have important implications for cultural identity because it reveals information about the historically large Afro-Bahamian population that settled on the islands.

“The most significant find in research was the discovery of over 9,000 slaves to the Bahamas from 1788 – 1806 from the David Eltis Slave Ship data base online. This data base gives ports in Africa from where the ships came from so that the West African nations and their languages can be known. And the Department of Archives have details of the first six ships of liberated Africans and a great amount of information about their African names, age, gender and relationships,” Mr Lawlor said.

“Language Migrations: Roots of Bahamian Vernacular” was also presented during the 2012 Caribbean Linguistic Conference, and the Bahamas at 40 Conference.

The Bahamas Historical Society hosts monthly meetings that are open to the public to share new insights from Bahamian researchers. The society is getting set to release its yearly journal in the near future.