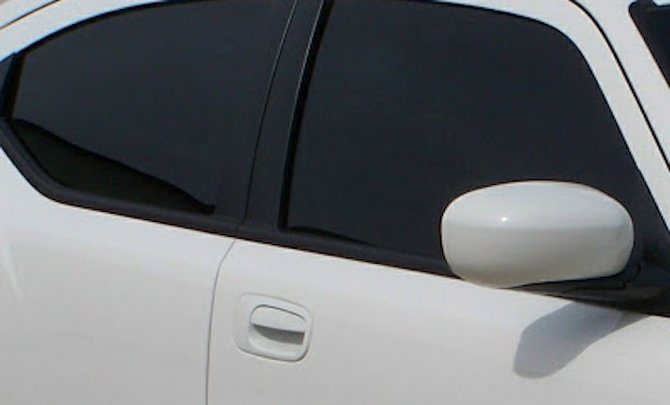 Officers will be issuing tickets to motorists whose windows are too dark for the police to see through.

Superintendent Stephen Dean said the new thrust was part of the police’s heightened approach to combating serious crime - heavily tinted vehicles are the transportation of choice for many criminals, he said last night.

windows are tinted, such as sunrays etc, but we are saying to you we need you to work with the police. “A number of the hardcore criminals who we have arrested for murder and armed robbery were travelling in heavily tinted vehicles. It is creating a deep problem for the police because often when we are trying to stop these vehicles we do not know who is in them. Our lives, in most cases, could be in grave danger.

“For the safety of the public we are asking you to take the dark tints off your vehicles.”

Assistant Superintendent Craig Stubbs, the officer in charge of the Traffic Division told The Tribune officers will be issuing fines of $80 for tints, and $250 if a vehicle’s licence plate is obscured from view. In addition, jitney buses that have their back windows plastered with advertisements will be fined.

Asked how officers intended to measure which tints would be deemed to be “too dark” as it will ultimately come down to the discretion of each individual officer, Supt Dean said that if the officer can’t see into the vehicle, “then that is it”.

However, he said if members of the public believed any officer was unfairly targeting them, they had the right to bring it before the Complaints and Corruption Unit. This would be handled on a case-by-case basis.

He said: “Some people might say why did you’ll come now and bother with the tints, but we realise that everything is connected. There is a correlation between small matters and the serious matters. We believe if we take that approach, leaving no stone unturned, we believe we will see a big dip in our major crimes.”

So, once again the law abiding citizens must suffer because of these AH*s. The tint saves money by reducing the cost of keeping my car cool, it protects my wife and kids when they are in the car alone as predators don't know they are alone, it protects things that I leave in my car from time to time as the theives don't see them, but the rights of the innocent to protect his family and property is not important ... are we heading to a police state???

My Dear Comrade, whilst I disagree with the abruptness of the policeman's sprunging the "no tinted windows" $80 tickets upon vehicle drivers, it is an excellent motor vehicle policy that has to be addressed. But addressed by the policeman's using a common sense approach. It is the ill-thought-out actions like this one which makes me so damn weary of the PM's new directive of placing even more power in the hands of our policeman's and now he wants to now include members of our defence force in policing. Be careful citizens of what you wish for. if you can't trust the policeman's to act with common sense with the little enforcements, why do you think you want give them increased powers to be performing even much more serious enforcements upon Bahamalanders and our visitors? I say, first give them a complete makeover in how to go about handling the public.

It also protects criminals and criminal activity from view. There's no need to go all blackout to keep the car cool.

The article clearly states, if the vehicle is too heavily tinted for an officer to see through, then you will be fined. Your loved ones and belongings can be still be protected with a tint that is dark enough to lessen the clarity of who is in vehicle without making it completely black. My understanding is that there is also a law on the books stating that the cargo area / rear seats can maintain a darker tint than the front two windows...so that items are better protected in the rear. We can't have our cake and eat it too; yes it may be a slight inconvenience to you, but the police need to enforce the law--starting with the small stuff. Studies prove the small criminals eventually progress to larger crimes i.e. the daily killings that we see in this small town. Sometimes we have to all come together and combat the small things in order to make an impact on the larger problems.

I am a firm believer in the zero tolerance approach to crime as I believe that criminallity is a mindset and that the persons who commit the "small crimes" are the same ones who commit or graduate to the "bigger crimes". That said however, the article states that what is considered too dark will be left up to the individual officer ... this is too subjective and WILL be abused. I wait to see how effective this approach will be. I will take some time this evening to remove my tints even though the guy who did my tinting told me they were a legal grade.

There is a danger to police the general public and to other motorist from cars with extremely dark tints. You can't see who is in them or what the person is doing. The problem is what yardstick should be used to determine if tints are too dark. If left up to individual opinion then there is cause for controvesy..Maybe someone needs to invent a tint meter. Or better yet maybe some officers from the traffic station can visit AID and tint visions make a list of the different shades of tint and say what is approved and what is not. But yet still the same tint on a car with an all black interior will look much darker than it looks on a car with beige interior

Just wondering if all the Judges' cars that I see around here with very dark tint will also get booked ... after all the law is the law and should apply to everyone.

I understand your point- unfortunately there are many laws that are abused in some way or another. The tints on my car are legal grade as well...They're dark enough to block the sun but if you're looking inside you can see who is in there. I guess we will have to wait and see how it goes but I do think society as a whole will benefit by the police cracking down on these small offences and others- but consistency will be the key here.

But rather than revert to the tint and fog light era I would hope that the police would come up with more 21st century innovations to fight crime.How many middle level and senior officers have seen a classroom setting since they became a policeman? Why not design some 6 week retraining and job enhancement classes for these officers? How many are sent away on courses of crime detection or forensics or ballistics training? And what about those officers who feel they still have a right to put their hands on detained persons and manhandle them? A pilot study was just completed a in California where police not only have cameras in their cruisers but they now wear cameras on the lapel of their uniform. They cannot do anything to stop these cameras from recording and neither could the erase anything that had been recorded. DURING THE 12 MONTH period the program ran complaints of misconduct against officers in the program dropped by EIGHTY THREE PERCENT!!! Not only did the officers know that all their actions were being recorded but the public got to know that they could no longer false claims against police officers because everything was being recorded. So the public could not tell lies on the police and the police also had to keep his story straight.

Before the police started pulling vehicles over to the side of the road, they actually use to come up to the vehicle themselves with a sharp instrument and scratch up the tint so that you had to remove it. But there were some lawsuits to the effect of 'willful destruction of property" and so the started making the drivers themselves remove the tint. Again this was above their authority but since they had the support of the commissioner of the day it was done. Then there was this inspector at Road Traffic at Fort Charlotte. He must have been a former police officer. But when you pulled up for inspection with tints on your vehicle, he would politely reach inside with the scarper he used to remove old inspection decals and put big, long scrapes on each of your windows and across the back windshield, if that too was tinted. Then he would tell you to go home and take the rest of the tint off then come back for your inspection. Drivers would take the tint off, get their inspection, then put the tint right back on. But there was the day when this inspector ran his scraper across the wrong tint. When the driver rush up on him and start throwing blows, he could swear the man was Killer Coakley. Well of course the police were called and the man was charged with assault and battery but, with the assistance of his lawyer he brought counter charges against the inspector. Regardless of the outcome of that legal battle, at least we know Road Traffic no longer put their hands into peoples vehicles to scrape tint. But back then getting a vehicle inspected was still a challenge for some people. Persons found themselves going for inspection 6 and 7 times and still could not pass. Some drivers could have probably pulled up in a brand new Rolls Royce, with Mariah Carey in the front seat, Rahiana and Madonna in the back seat and still could not pass. So they had to get someone to go get the car inspected for them. So who says we didn't make progress?

Its the LAW!!! Enforce it. Most People are asked to remove the tints as well.

With Rory on this one...issue the police with tint strips or meters to measure the level of tint. I have tinting, but it is a medium tint that is put on to match the factory smoked glass in the rear portion of my vehicle. I will NOT pay for any tinting fines until all the 'privately owned' vehicles of various police officials, judges and politicians are held to the same standard. So long as a double standard is out there, it will not get paid or enforced. I can totally understand OFFICIAL vehicles, like police vehicles, or undercover vehicles, but the private vehicles owned by government employees...NO NO NO. With that being said, I think moderate to medium tinting should be allowed in this climate. The super dark black out 'limo' tint, or mirror style tints...no, that's taking it too far. JMHO.

Does the law preclude "OFFICIAL" cars, because if it doesn't then all we are doing is creating a double standard which ALWAYS leads to a breakdown in what we are hoping to accomplish.

The recorder in a patrol car can't be stop or erase by the officer unless he has access password to the unit functions, all he can do is cover the camera. Any tampering with the unit would create a file in the data base.