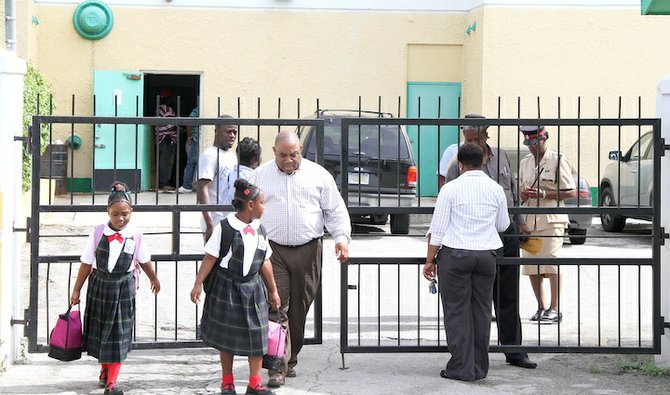 CLASSES have been cancelled at Stephen Dillet Primary School and Uriah McPhee Primary School for the rest of the week as teachers protest about their working conditions.

Director of Education Lionel Sands said that not until the schools' faulty air conditioning systems, and a mould problem in one of the buildings, are fixed will school resume, adding that he expects that to happen by next Monday.

Yesterday all 38 teachers at Stephen Dillet took part in a sit-out in protest against working in a school that not only lacks windows, they said, but that also has a faulty air conditioning system.

Teachers at Uriah McPhee Primary School had also refused to work not only because of the school's faulty air conditioning system, they said, but also because of the presence of mould in the building and overcrowded classrooms.

Yesterday's protests came amid continuing tensions between the Bahamas Union of Teachers (BUT) and the government over various school issues across the Bahamas.

The school day at Stephen Dillet ended at 12pm after teachers gathered outside in protest against working in a school that not only lacks windows, they said, but that also has a faulty air conditioning system.

Zane Lightbourne, vice-president of the BUT, said: “This problem existed for a number of years. Teachers were assured it would be addressed and now that it hasn’t they have had enough. It is unsafe and unhealthy, rats and rodents are also in the school.”

John Musgrove, BUT’s Secretary General, defended BUT’s recent decision to call a nationwide sit-out and to file six industrial disputes against the government, adding that the BUT was being vindicated by the protests.”

He said it was proof that the Minister gave “misleading” statements when he said schools were in the best condition they have ever been in.

He said: “Obviously he didn’t walk these schools like he said he did. The Minister is being very disingenuous. Why are they just painting the schools and fixing the air conditioning?”

Director of Education Lionel Sands said the Ministry of Education was working to improve conditions at the schools.

He said: “The technician came in to check the air quality on one of the filters.

“I’ve already indicated to the Superintendent and Principal that we’ll have to dismiss school at 12pm if problems persist. This issue just came to my attention. The teachers here don’t usually argue for anything so when they do their concerns are real.”

Teachers at Uriah McPhee Primary School refused to work they said because of the school’s faulty air conditioning, the presence of mould in the building and overcrowded classrooms.

Angry parents from the school board also went to the school yesterday to express their concerns to the principal and the district superintendent over the conditions.

Although The Tribune was told the media could only access the campus after 3pm, parents could be seen leaving the school with their children.

One parent said she was called from her home to collect her children by a teacher.

Her sons said many of the students congregated inside the school’s auditorium rather than their usual classes.

There, they were being taught by the principal and senior mistress.

The young boys said they had not seen their teachers for the day.

Mr Sands said: “The air conditioning seems to be working well but teachers are not in the classroom according to officers. We’re going to get the air quality people to go there to see if that is really the case.”

Drassler Sherman, Superintendent of the North Eastern District, said: “The air conditioning unit at one section of the school and some of the bathrooms are not working and they say there is mould in the building.

“All of these issues are being addressed. We will be able to supply two teachers tomorrow. The school has the capacity, but one teacher is on maternity leave and there’s another teacher we’re sending in because there was a shortage. The Ministry and Department of Education are making every effort to bring resolution to the matter.”

Officials were unable to say if the schools would be back to normal today.