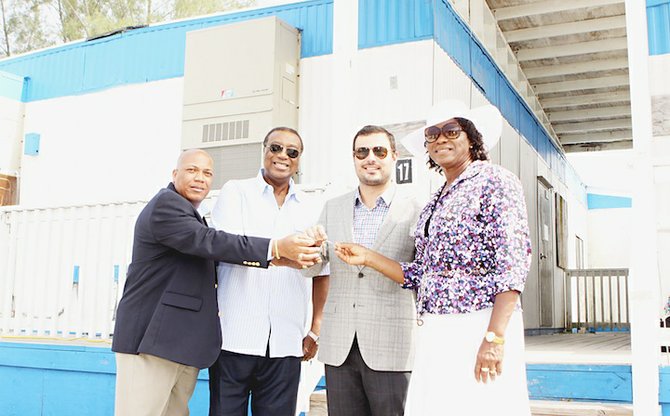 The trailers were donated by Ledcor, which has been working on the Lynden Pindling International Airport (LPIA) project since 2009, according to construction manager Mike Maierle, who noted that the trailers come with air conditioning units and are “internet ready.”

He said: “We will also be donating our lunch tent and picnic tables, as well. We truly believe in giving back to communities where we work especially when it involves helping kids.”

Accepting the donation, Mr Allen thanked Ledcor for the trailers and noted the Defence Force will be housing the trailers until “the most appropriate permanent locations” are identified.

He also thanked Buildex Construction for transporting the trailers to the Defence Force’s Coral Harbour Base at no cost.

“It is Urban Renewal’s profound pleasure to receive this gift,” Mr Allen said. “The buildings will provide a valuable resource to assist the goals of Urban Renewal and the Bahamas, to expand our services to the local community, and to enriching the lives of the poor and the marginalised in our beloved Commonwealth of the Bahamas.”