Schools 'Pose No Danger To Health' 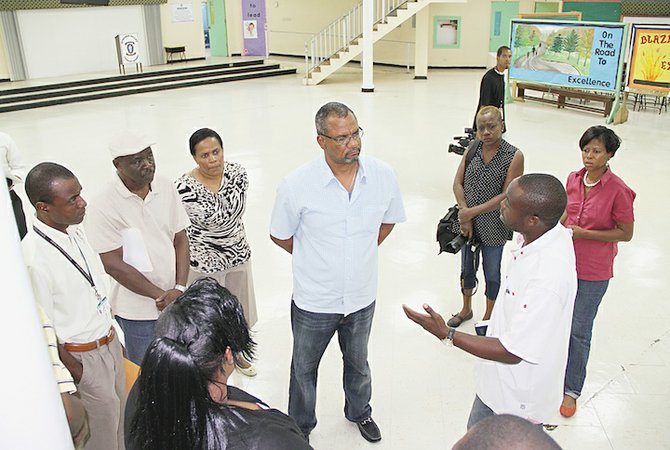 Minister of Education Jerome Fitzgerald and education officials met members of the PTA board at Stephen Dillet Primary School yesterday to answer questions and to tour the school. Photo: Tim Clarke

THE Department of Environmental Health Services has declared that Uriah McPhee and Stephen Dillet primary schools pose no health threat to students or teachers.

According to a DEHS statement released by Minister of Education Jerome Fitzgerald during a tour of Stephen Dillet yesterday, both schools are authorised to resume normal hours.

This comes after the Bahamas Union of Teachers organised a work stoppage by teachers at both schools, complaining of mould and poor conditions. Last week, one mother claimed the air at Stephen Dillet triggered her daughter’s asthma attack.

The DEHS has given the Ministry of Education 10 days to complete phased works at the schools, but said these will not pose any “imminent danger” to teachers and students.

“If at any time we believe that any threat to human health and safety exists, we will order the closure of the schools,” it said.

“Following the 10-day period and a successful follow-up assessment, DEHS will make itself available to answer any questions posed by faculty and parents.”

The statement, attributed to the director of Environmental Health, but not signed, said the Ministry must carry out the following works at the schools:

• The simultaneous spiralling and vacuuming of the air conditioning ducts;

• The removal and pressure washing of the fancoil wheels;

• The removal and cleaning of the air conditioning vents (grills and deffusers);

• The fogging of the indoor environment using an approved disinfectant;

• Ensuring the air conditioning system is operating at optimum;

• Ensuring the schools are treated for rodents.

Union president Belinda Wilson warned last week that she intends to file a trade dispute against the government over the condition of the two schools.

“We have two main issues with Stephen Dillet,” she said. “The vents need to be cleaned really, really thoroughly. Dust is being circulated from it and blown out, causing moisture and mould in the school. The other problem is the fibre glass issue.”

Ms Wilson showed the press photos of what she says are fibre glass problems at the school and a report by the union’s private inspector, who she said declared the school unfit for use.

“If the problems are too great, we have suggested some alternative sites to have school. The government would only have to provide bus service for the students.

“They got a report from the Ministry of Environment and from our inspector. After receiving our report they sent a person from the Environmental Department back to the school to assess the problems and that person went back to them and said there were fibre glass problems in the school, so stop being disingenuous and say what the issues are. All we want is for them to devise a plan to move forward.”

Two weeks into the new school year, normal classes have yet to resume at either of the two primary schools, prompting parents to complain about the negative effect on their children’s education, even as they continue to worry about the health issues.

A few days before Mr Fitzgerald’s visit to the school, vice-chairman of the PTA board Vanessa Woodside, sitting in solidarity with the teachers, said: “We would like to see the minister here. We are concerned about the safety of our kids, the teachers, administrators, the janitorial staff and security. We will sit here until the building falls.

“It’s very hard in the Bahamas for people with no education. Here we are as parents. Feel how we feel that we have to keep our kids home.”