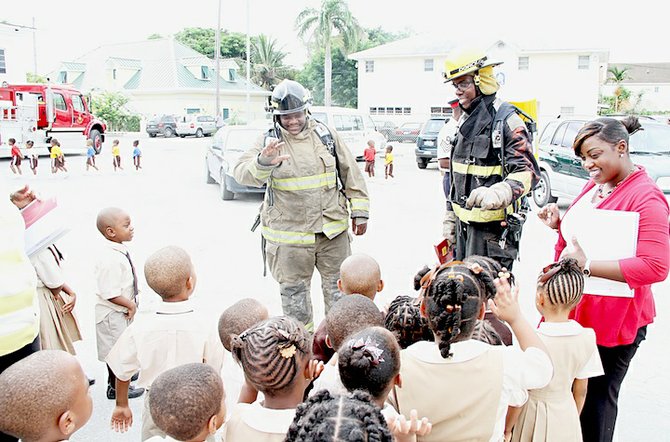 Fire Services director Walter Evans told The Tribune that the drills were designed to “test the readiness level of the institutions that participated” to ensure that they adhered to international and local standards regarding responses to emergencies.

The drills were conducted at 32 institutions and they came a day after National Security Minister Dr Bernard Nottage said that this year the country has experienced an increase in fire related tragedies compared to last year.

Mr Evans noted that 35 staff members of the fire department participated in the drills and 14,500 persons were evacuated.

“If there are any mistakes that are to be made,” he said, “this was the time to do it. All the groups performed well. They were assessed and will be given an assessment report this week.”

Temple Christian Academy was among the schools the firemen visited. About 753 students participated in the drill.

One officer, Sgt Sands, assessed the performance of the children, telling them: “Overall y’all did a good job. I think y’all came almost immediately. People get up and go to work and don’t think about an emergency. But remember, you must always be in a state of readiness.”

The principal of the school, Sharmaine Porter, said the school conducts fire drills about three times a year. “Only one actual fire has occurred wherein one of the buildings was destroyed, but even then no one was injured,” she said.

“We will be moving into the various sectors of New Providence and officers in Grand Bahama will be doing likewise. Emphasis will be placed on putting smoke detectors up for disable persons,” he said.