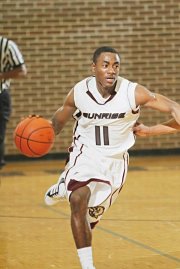 LOURAWLS Nairn will be taking his talents to East Lansing, Michigan, in the fall of 2014 after he verbally committed to the Michigan State Spartans yesterday.

Nairn made the announcement yesterday at his Sunrise Christian Academy gymnasium in Bel Air, Kansas, as he heads into his senior season as the point guard for the Buffaloes.

Nairn will look to fill the void left by the departure of senior point guard Keith Appling who is currently in his final year of eligibility.

Nairn shot up the recruiting charts with an impressive summer circuit on the hardwood. He saw his stock rise to the 61st ranked basketball player in America for the class of 2014 by Rivals.com and 72nd by ESPN.com.

Nairn made an official visit to the Spartans two weeks ago and said he immediately connected with legendary Spartans head coach Tom Izzo.

“That’s the crazy thing about it, I never felt like I didn’t know him,” Nairn told Scout.com.

“As soon as we talked, it was like a match made in heaven. We are the exact same people. Everything he told me wasn’t always about basketball. I knew it was the place for me as soon as I talked to coach Izzo. We had some great conversation. I knew I didn’t want anyone to coach me in college basketball other than him.”

Nairn’s eventful summer included participation in the Nike Point Guard Skills Academy and the LeBron James Skills Academy. His performances at the camps placed him among the top 30 players from the Nike Elite Youth Basketball League and Skills Academies and earned him a spot on the USA West roster at the Nike Global Challenge.