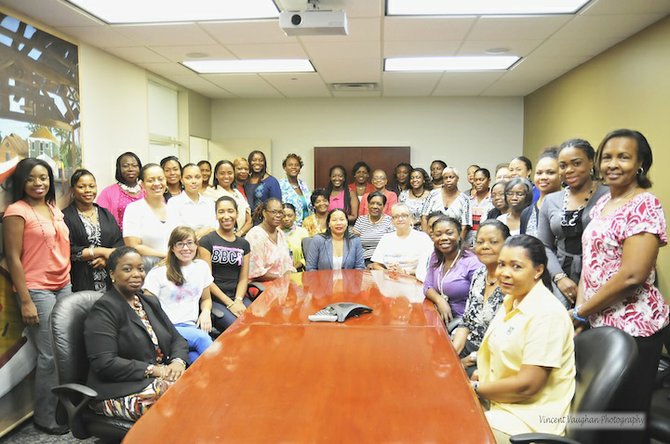 The initiative was a joint partnership between RBC and the Bahamas Breast Cancer Initiative Foundation (BBCIF). The genetic testing was carried out at Royal Bank House, where support and advice was made available to employees.

The initiative included an educational session on hereditary breast cancer, which is extremely prevalent in the Bahamas, and preventative practices.

BBCIF is a public-private partnership formed in April 2008. Its mission is to facilitate the collaboration of multiple partners to improve breast cancer care in the Bahamas.

The organisation has been instrumental in raising funds and awareness in the fight against breast cancer through public awareness and student education campaigns throughout the Bahamas.

The genetic testing campaign was established by BBCIF to gain a better understanding of hereditary breast cancer here.

The staggering statistics show that one in four Bahamian women carry a possibly deadly genetic mutation related to breast cancer.

Research has also revealed that Bahamian women are developing breast cancer at the age of 42 – which is 20 years earlier than other countries.

The test results will be used to determine the prevalence of the gene in the Bahamian population and explore why the gene is so aggressive amoung Bahamian women.

The campaign also seeks to improve breast cancer treatment and protection for all Bahamian women.

The spit test being used usually costs $4,000. BBCIF has negotiated a reduction in costs to $100 through a subsidised research grant.

“RBC is proud to continue its commitment to the fight against cancer through contributions to the RBC Children’s Cancer Fund, Ride for Hope, the Cancer Society of the Bahamas and the Bahamas Breast Cancer Initiative Foundation.

RBC is also steadfast in its commitment to the health and wellbeing of its employees.” Ms Knowles said. “The initiative encompasses our dedication to our employees and the community towards a healthier Bahamas.”

Staff were quite receptive to the screening and appreciated the opportunity.

“I am so grateful for the opportunity to be tested and the information provided about the BRCA1 and BRCA2 gene. I hope more women are able to get tested and that a cure is found for this dreadful disease”, said Maxine Bullard, executive assistant.

Support officer Tamisha Knowles said: “Awesome stuff! I was truly informed and educated on the importance of early breast cancer detection. I thank God, that the corporate communications team saw the need to share this knowledge with the females at RBC.”

More than 60 employees took advantage of the testing session, which took place on September 20.