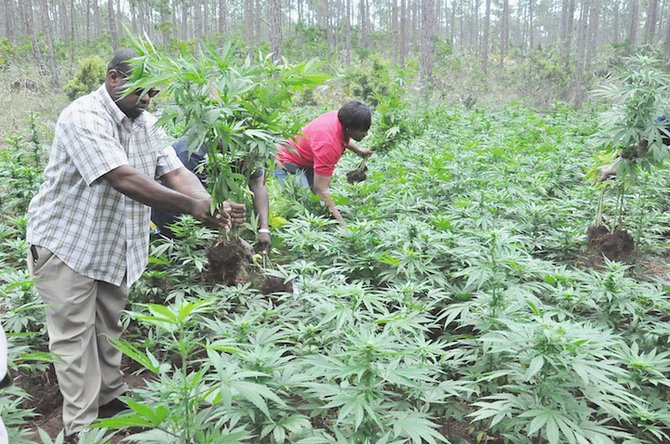 Officers pulling out marijuana plants in the field in East Grand Bahama.

TWO Jamaican men were arraigned yesterday in connection with the recent discovery of nearly $17 million worth of marijuana plants growing in the pine forest in East Grand Bahama.

Both men pleaded not guilty to the charges, alleged to have been committed on March 24.

On the day in question, Drug Enforcement Unit officers, with other law enforcement agents, made the discovery around 4pm on Monday.

While on routine aerial patrols in the eastern area of Grand Bahama, some 27 marijuana plots were detected in a two-mile radius of undeveloped land.

Both accused men were informed by Magistrate Archer that they would appear before drug court Magistrate Andrew Forbes on April 8 to receive a substantive trial date.

“You will both be remanded into custody until then and I will advise you, if you so desire, that you can make an application to the Supreme Court for bail. None will be granted at this level,” the magistrate added.

Before they were remanded to Her Majesty’s Prison, their lawyer, Nathan Smith, made complaints of police brutality.

“I’ve been informed,” he said, “that they suffered abuse while in custody.”

“They were not duly informed of their right to counsel and they were also offered inducements” he said, further requesting that they be provided medical attention.

The magistrate acknowledged the request and said she would place a notation on their warrant that they receive medical attention upon their remand to prison.