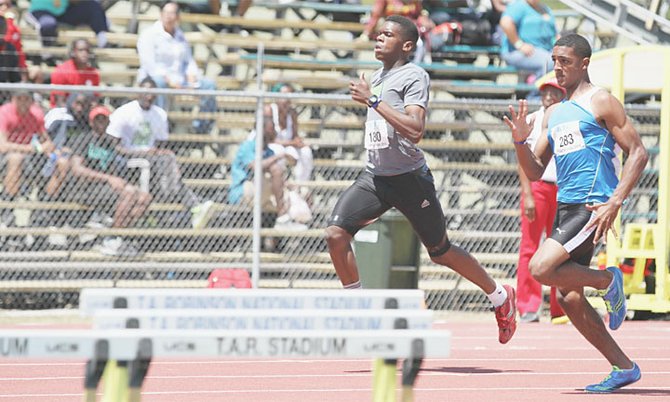 Following the completion of their final trials over the weekend at the Thomas A Robinson Track and Field Stadium, the Bahamas Association of Athletic Associations has selected an 81-member team for the CARIFTA Games over the Easter holiday weekend in Martinique.

The team is the largest ever selected for the top regional junior event, but that’s because the organisers have increased the quota after they changed the age groups from under-17 and under-20 to under-18 and under-20 to comply with the governing body IAAF requirements for their meets.

Jamaica once again dominated, collecting 29 gold, 25 silver and 15 bronze for their grand total of 69. Trinidad & Tobago ended up tied with Barbados for third place with 20 medals.

Quartermiler Shaunae Miller emerged as the Austin Sealy winner of the most outstanding award after she posted a gold in the under-20 girls 200 and 400m as the Bahamas completed a sweep of the sprint events. And Miller teamed up for the gold on the 4 x 100m relay team.

Medallists from last year returning this year are under-20 boys - LaQuan Nairn, the gold and silver medallist in the long and high jump respectively, Charles Sealy, bronze medallist in the heptathlon and Janeko Cartwright as a member of the bronze 4 x 400 metre relay team.

In the under-20 girls’ division, Devynne Charlton, the 100m champion and 200m hurdles bronze medallist, who teamed up with Keianna Albury for the gold in the 4 x 200m relay and Juanae Lewis, a member of the bronze 4 x 400m relay team.

In the under-17 boys’ division are Keanu Pennerman (silver in the 200m); Kinard Rolle (silver in 200m; Benjamin Najman (bronze in 1,500m); Mikhail Bethell (bronze in 400m hurdles) and Ken Mullings (silver in high jump). Pennerman ran on the bronze 4 x 100m relay team and all four members of the victorious 4 x 400m relay team - Henri Deluze, Tyler Bowe, Kinard Rolle and Miokhail Bethell - are all back to defend their title.

Among the athletes making their debut this year is Steven Gardiner, who has had an exceptional performance in the under-20 boys 200m. The jumpers and the throwers have also been performing very well this year, which should provide the team with a lot more versatility.

Here’s a look at the team selected for this year’s games:

The BAAA is scheduled to hold a meeting with the athletes and parents 6pm today at the TAR Stadium to provide all the necessary requirements for the athletes to be able to make the trip to Martinique.