The Teenager Who Won Fight For Her Life 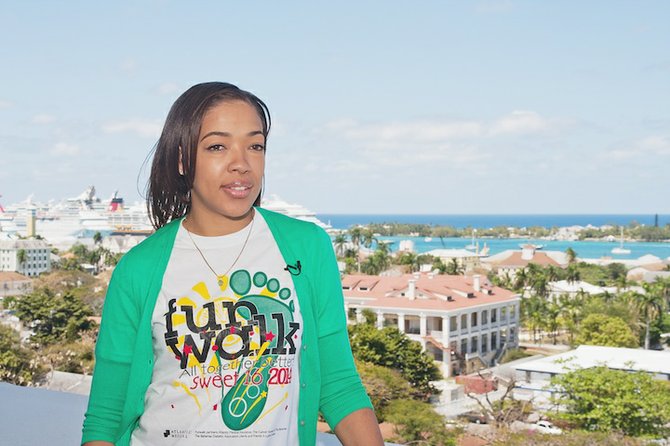 Cancer survivor, Joyce Brennen, 26, recounts her journey with Hodgkin’s lymphoma. She was diagnosed at the age of 18 after experiencing rapid weight loss and pain in her leg. Brennen is now encouraging Bahamians to get healthy and take part in Atlantic Medical’s 16th annual Fun Walk. Photo: Terrance Strachan

WHILE most 18-year-olds were getting ready for college, buying their first car or moving out of their parents’ home, Joyce Brennen was readying herself for the biggest fight of her life – her battle with cancer.

Her cancer journey began in 2006 when she started experiencing pain in her leg.

She admits she dismissed the pain initially, but eventually settled on seeking medical help.

“When I went to the doctors, they told me it was growing pains because I’m pretty tall,” says Joyce who stands at 5’11”.

“They told me I’m just growing and there’s nothing to be worried about. But, then it got worse and I started to walk with a limp.”

She then started losing weight rapidly.

Still in pain, much thinner and unconvinced that she was merely experiencing growing pains, Joyce went to several more doctors who ordered a battery of tests.

“I had blood tests done, I had a bone marrow biopsy and still nothing came back saying that anything was wrong. Then I got a lymph node biopsy and that’s how they found out that I had Hodgkin’s lymphoma,” says the now 26-year-old. “Apparently one of my lymph nodes was swollen and resting on a nerve in my groin, so that was causing me to have pain in my leg.”

Hodgkin’s is a cancer of the lymph tissue. It causes fatigue, weight loss that cannot be explained, soaking night sweats and swollen glands among many other symptoms.

Joyce said when she found out she had cancer, she “cried like a baby”.

“But the doctor reassured me that Hodgkin’s lymphoma – if you have cancer – is one of the better ones to have because it has a high cure rate. So, that made me feel a little better. My mother is a God-fearing woman, so she said we’ll just pray about it and it’ll be okay, so she kept me strong.”

Joyce said because her family does not have a history of cancer, her diagnosis came as a shock to everyone.

“I was young and I was afraid. I could see that it took a toll on (my mother) and my dad but they kept strong and they were my pillars of strength.”

She later underwent 12 rounds of chemotherapy.

“My hair thinned, I didn’t lose all of my hair, the treatments made me feel lethargic, but no serious nausea and vomiting like a lot of people experience. I had one round of chemo that was really bad; it knocked me out for a week; I was throwing up constantly and had no energy whatsoever,” she said.

Today, Joyce says she is cured, but acknowledged that it is possible it may come back later as something else.

“But I’m hoping for the best that that’s not going to happen,” she said.

Joyce, who has completely overhauled her lifestyle to exclude processed foods and incorporate an exercise routine, is now hoping to encourage younger people to take their health seriously.

“It’s important to (get checked out). I was one of those people who didn’t go to the doctor; I’d say nothing is wrong with me, I’m healthy, but it’s really important to get those annual physicals and when you reach the age to get those pap smears and mammograms, it’s really important because cancer has no age, it doesn’t disregard young people. There are people as young as five or four and some are born with cancer. You have to be concerned about your health,” she said.

On Saturday, April 12, Joyce will take part in Atlantic Medical’s 16th annual Fun Walk and she wants others to follow her lead, noting that it’s for a good cause.

All of the proceeds from Atlantic Medical’s Fun Walk goes to the Cancer Society of the Bahamas and the Bahamas Diabetic Association.

“Here in the Bahamas there are two things we are plagued with. I’m sure that everyone knows someone who has been affected by cancer or diabetes in some way. If it’s not in your family you know someone, work with someone,” says Joyce whose best friend has Type 1 diabetes.

“For all proceeds to go to the Cancer Society and Diabetic Association it’s great for a corporate entity to do something like that. Like I said, the treatment isn’t cheap, so for people who can’t afford it themselves they can go to the Cancer Caring Centre and they can have their treatment there. It’s an excellent thing.”

Joyce is also a member of the Cancer Society’s Freedom Survivors group, which offers support to younger individuals who have been either directly or indirectly affected by cancer. It’s her way of encouraging others facing a cancer diagnosis.

The Fun Walk takes place on April 12 at 6:30am starting at Montagu Beach.

To register, visit Atlantic House on the fifth floor on Collins Avenue and Second Terrace, Centreville between 8:30am to 5pm. The cost is $20 for adults and $10 for children. Registration is not allowed on the day of the event.

Great. Prayers works wonders and you made up your mind to fight this disease. Beautiful ending.