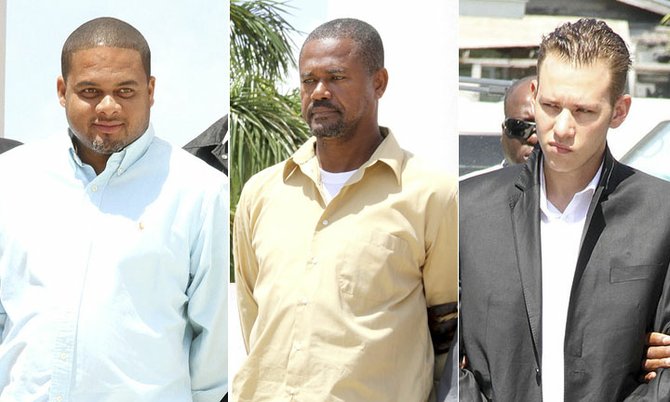 Darryl Bartlett, Murrilo Sullivan and Michael Webster outside of court.

A DOZEN drug charges were brought against three men yesterday in connection with the recent seizure of more than $1m worth of drugs at Lynden Pindling International Airport.

Among them were 37-year-old Bahamian pilot Darryl Bartlett, and 48-year-old pilot and former policeman Murrilo Sullivan of Bel Air Estates.

The three, who all pleaded not guilty to the charges, face up to seven years in prison if convicted of the crimes alleged to have been committed on Monday, April 7.

On the night in question, officers and administrators of the Drug Enforcement Unit acted on a tip that led them to the Executive Flight Support section at the Lynden Pindling International Airport.

It was here that a search was conducted of a Hawker Jet that had just arrived from Montreal, Canada. During the search, officers found four suitcases containing 149 pounds of marijuana, 17.4 pounds of ecstasy pills and 2.6 pounds of Hashish oil.

Magistrate Forbes informed counsel for the defendants that they would stand trial on June 19 and would be remanded to Her Majesty’s Prison, as the question of bail did not arise, due to the nature of the charges.

He further advised that he would make a note to prison officials to make special arrangements for “one or two of those individuals who may have security issues at the prison.”

The magistrate also asked for the Canadian to be allowed to make contact with a consular office to advise them of his status.

Webster has retained lawyer Michael Kemp to defend him while the pilots are represented by Elliot Lockhart.