Look a true patriot in the eye 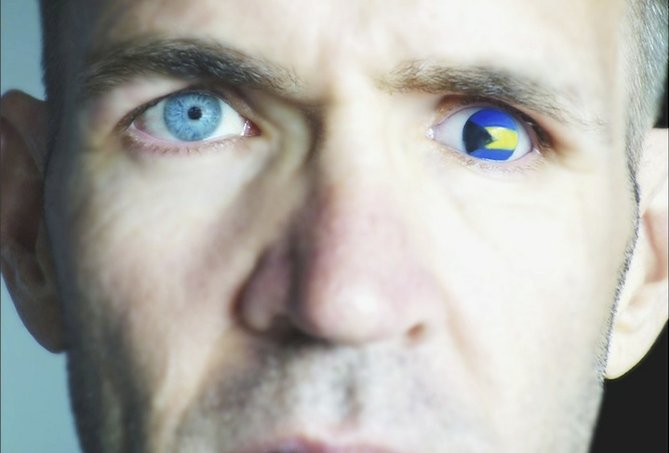 IF you ever doubt Mark Roberts’ patriotism, you only have to look in him the eye.

After the owner of the Tile King and FYI Builders Mall lost his eye when the plane he was piloting crash landed on Little Whale Cay in 2010, he decided to show his love of country by getting a tiny Bahamian flag printed on his prosthetic eyeball.

“Why did I decide to do it? It was just a really cool thing to do,” Mark, president of FYP Builders Mall, told The Big T. “I get varied responses when people see it. Some, to be honest, are completely freaked out and ask, ‘What are you thinking?’ Most people want one and change their minds after I explain the process of getting one.

“Coming home after getting it, I arrived at the Immigration officer and explained that I had misplaced my passport. A very concerned school teacher look spread across the officer’s face and her brow furrowed as she looked at me. I bent closer to her and asked her if my left eye would serve as some proof that I was indeed a Bahamian,” he joked. “Needless to say, she was pretty shocked and said she had no doubt any longer, but I had still better locate my passport or a few meetings with her supervisors would be in order and I better have a few hours to spare.”

The path that led him to eventually being fitted with a Bahamian flag eye started when Mark decided to learn to fly after a particularly rough flight from Chicago to Miami.

“It was after that flight that I decided that I wanted to be behind the wheel in the cockpit rather than a passenger,” he said.

On the day of his accident – 15 years after he had qualified as a pilot – he was flying with his wife Louise and his parents, Larry and Liz Roberts. “I was trying to fly in very bad weather and thought that I could make the landing. Instead, the plane clipped a tree on the way down, causing the crash,” he explained

In addition to his massive eye injuries, Mark sustained serious head injuries, as well as a broken nose and other injuries to his face, neck and ankles. His wife, Louise, who was three months pregnant at the time, sustained head and neck injuries. Mark’s father suffered a broken back, while his mother sustained only minor injuries. Louise gave birth to their first child, Hailey, five months after the crash.

Mark was later airlifted by a special US Coast Guard helicopter to Nassau and then Miami to treat the injuries to his body and also to have specialists try to repair the damage to his eye.

After four surgeries, the team of doctors at Bascom Palmer Eye Institute in Miami had to deliver the news to Mark that he would no longer be able to see out of his left eye. The damage was irreparable and the current technology available in the medical field of eye replacement would not allow for this course of action.

For three years, Mark avoided getting a prosthetic eye for one reason or another.

Finally in February of this year, he made an appointment with an ocularist to get assessed to see if a glass eye could be fitted.

“The procedure to make the mould is very much like having a mould of your teeth made. They use the same paste, but it is injected into the eye cavity and over the top of the dead eye. Once it hardens, the ocularist has to dig it out with a special type of pliers and what looks like a butter knife. It does feel strange,” Mark said.

“Following the initial mould being made, the next step in the process involves an artist that actually paints your good eye onto a mini canvas that is a half an inch round canvas. She looks at your good eye, selects the oil paints she will use to match it, and 20 minutes later she produces a perfect match – pupil, veins and all. It is quite remarkable.”

The next step in the process, he said, was back to “the torture chair where they fit the mould back into the eye cavity to test out the final rubber mould. They add wax to it to make minor adjustments and once the desired fit is achieved you get to take a break for the afternoon while they make up the first glass prosthetic. Because I was travelling from the Bahamas, the doctors rushed me through and what usually would have taken five days, they condensed my fitting sessions into two days. On the final day, I was fitted with the glass moulded eye. This eye did not have the iris and pupil artwork installed and was just for the final fitting. Combining all three parts of the eye would take another week and I would return for the final product. During conversations with the doctors and the artist I inquired about an eye “upgrade”. They looked at me inquisitively and I explained that I wanted a flag eye. I showed them the Bahamas flag on the internet and they thought it would be a great project to create a very nationalistic eye. The end result took about three weeks and is fantastic.”

Although, he loves his flag, Mark said that he will also have a “regular” prosthetic eye done as well. And despite his traumatic experience, he said that he is not afraid to fly, because he feels that lightening will not strike twice.

Comrade Mark's creativity of a tiny Bahamian flag printed on his prosthetic eyeball has got's me thinking of creating some cool designs for selling Pirate Eye-patches to the tourist.

He must be an amazing person aside from the Bahamian flag and all he went through.

Is it true that the "FYP" in FYP Builders Mall stands for "F_ _ _ You Pinder!" who happens to be FYP's major competitor in the tile business? This fella Mark and the actual majority owner/financial backer of the FYP companies must be quite the characters and certainly not of the kinder gentler Christian variety. Oh well, what goes around usually comes around!