NO DATE FOR REFERENDUM: Nottage cites lack of campaign to educate public 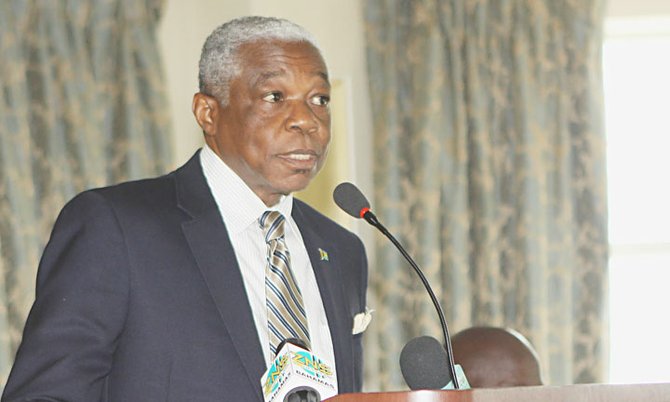 THE lack of a public education campaign could be blamed for delays in any expected changes to the country’s constitution, a senior Cabinet Minister has confirmed.

National Security Minister Dr Bernard Nottage, who also has oversight for referendums, said the question of when the constitutional referendum will take place is just a matter of ensuring that the electorate is made aware of what they are actually voting on.

Since Prime Minister Perry Christie’s announcement last October that Bahamians would vote on changes to the Constitution by the end of June 2014, there has been no initiative launched to educate the electorate.

As it stands, Dr Nottage said he was not aware that any date had been determined. He added, however, that it was a matter currently being discussed.

“It is just a question,” Dr Nottage said, “of ensuring that the general public is fully aware of the issues that will be placed before them. I think since the referendum committee reported there has been no public explanation or presentations by them as to what it is that they will be asked to approve or not approve.

“And so I think it is just a question of ensuring when the public is asked to vote they know what they are voting on.”

The Constitutional Commission submitted its report on July 8, 2013, just in time for the 40th anniversary of independence and nine months after being formed by the Christie administration.

Soon after, Mr Christie said Bills to amend the constitution would be brought to Parliament by the end of 2013 and passed by February of this year.

The Commission recommended that reforms be made to citizenship provisions regarding gender neutrality and equality between men and women; expanding the definition of discrimination in Article 26 to include “sex” as a prohibited ground; creating a constitutionally and operationally autonomous Director of Public Prosecutions with control over public prosecutions; and creating an independent and constitutionally secure Election and Boundaries Commission with responsibility for the conduct of elections and reviewing the boundaries of constituencies.

The report stated that the recommendation to expand the definition of discrimination to include “sex” had created “deep” division over whether this term’s inclusion would open the door for rights based on sexual preference. As a result, the commission also recommended further amendments to ensure that any law prohibiting same-sex marriage would not be deemed unconstitutional by the amendments.

I think the referendum is delayed because the PM was not born 6 months earlier.

Amazing that a country that has such a deep history of discrimination being hurled against the vast majority of its citizens and especially their ancestors, would now want to ensure that they can practice discrimination against "other people".

I guess it's always not a problem if you're not the one being targeted. Everyone is a child of God except the ones they don't like.