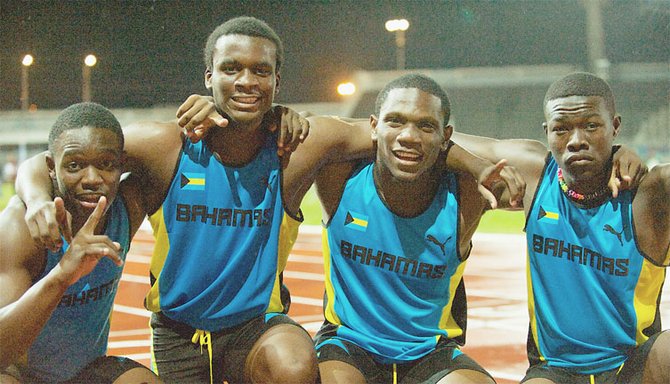 After finishing second at the 42nd CARIFTA Games last year at the Thomas A Robinson National Stadium, the Bahamas slipped out of contention at the 43rd games held over the weekend in Fort De France, Martinique.

The official medal table was not available up to press time last night. But from the results posted, the Bahamas only managed to accumulate 20 medals, including just one gold medal.

The lone gold came from the under-18 boys 4 x 100 metre relay team of Kinard Rolle, Tyler Bowe, Keanu Pennerman and Javan Martin. The quartet ran 40.76 seconds on day two of the games on Sunday, handing Jamaica their only defeat in the short sprint relay event as they finished in 40.78. Trinidad & Tobago got the bronze in 42.41.

The Bahamas only got one other medal in the short sprint relay and that came from the team of Blayre Catalyn, Janae Ambrose, Andira Ferguson and Brianne Bethel, who ran 45.91 for the silver in the under-18 girls race, trailing Jamaica, who captured the gold in 44.80.

On the final day of competition, the Bahamas feared a lot better in the 4 x 400m relay.

The Bahamas closed out competition on the track with the under-20 boys team of Kelso Pierre, Janejko Cartwright, Ashley Riley and Steven Gardiner picking up the bronze in 3:11.32. Trinidad & Tobago won the gold in 3:06.02, handing Jamaica their only defeat as they settled for the silver in 3:07.71.

Only three teams participated in the under-20 girls’ 4 x 400 relay with the Bahamas team of Juannae Lewis, Loushanya Neymour, Marissa White and Talia Thompson picking up the bronze on 3:47.64. The gold went to Jamaica and Trinidad & Tobago got the silver.

In the under-18 boys 4 x 400 relay, the Bahamas team of Kinard Rolle, Samson Colebrook, Justin Pinder and Henri Delauze got the silver in 3:13.16. Jamaica won the gold and Trinidad & Tobago were the bronze medallists.

And in the under-18 girls 4 x 400 relay, the Bahamas team of Shaquania Dorsett, Dreshanae Rolle, Brianne Bethel and Donneisha Anderson got the silver in 3:39.65. The gold went to Jamaica and Barbados got the bronze.

Individually, the Bahamas got its only medal on the track on Monday’s final day of competition in the 200m from Javan Martin with the bronze in the under-18 boys division in 21.15.

On the field, LaQuan Nairn picked up the bronze in the under-20 boys high jump with a leap of 2.00m. He was tied with Tahir Jefferson from St Kitts & Nevis with the same height, while Jamaica got 1-2 from Clayton Brown and Christoffe Bryan with 2.16m.

During Sunday’s competition, Miquel Roach ended up with the bronze in the under-20 girls heptathlon with a total of 4,365 points.

Drexel Maycock picked up a bronze medal in the under-20 boys discus with a heave of 49.31m.

And on Saturday, the Bahamas got two medals in the 100m. Javan Martin took the bronze in the under-18 boys century in 10.49, while Janae Ambrose struck silver in the under-18 girls’ straight away race in 11.62.

There was also only one medal produced in the 400m. That came from Henri Delauze with his silver in the under-18 boys race in 47.60.

On the field, Travis Ferguson got a bronze in the under-28 boys javelin with a toss of 60.40m. Grenada surprisingly got the gold and silver.

The team is expected to depart Martinique today.

During the annual Games’ Congress held on Sunday, St Kitts and Nevis was confirmed as the host of the 2015 games, while Greneda was awarded the bid for 2016.

Congrats on the win. Well done to the Jamaican team who copped silver even though the anchor leg suffered an injury midway to the finish. Valiant effort team Jamaica.