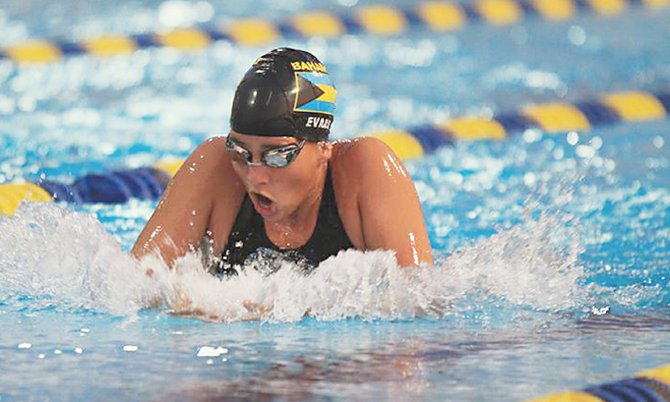 Team Bahamas continues its stellar performance at the 29th CARIFTA Swimming Championships in Aruba and appears on pace to claim the overall meet title headed into the final day of competition today.

In just three days, the team has surpassed last year’s total of 29 medals which included eight gold, 10 silver and 11 bronze.

Six gold medals highlighted the action on day three for the Bahamas, led by Albury Higgs and Joanna Evans who won a total of five medals.

The next series of races saw the Bahamas deliver one of the most dominant team performances for a single event as they captured six medals in the 50m breaststroke.

Higgs returned to the pool to capture her second individual gold medal of the night in the event. She took first place in the girls’ 13-14 division in 34.92, followed by team-mate Victoria Russell in 35.18 to give the Bahamas a one-two finish.

At the conclusion of day two, the Bahamas led the point standings with 356 points and collected a total of 25 medals - 10 gold, 11 silver and four bronze. The team won 11 medals on day two.

The 400m individual medley opened the productivity for the Bahamas at the medal podium on Wednesday night.

In the combined girls’ 11-14 group, Albury Higgs continued her dominance at the meet with a gold medal finish in 5:05.62.

She surpassed the CAC “A” qualifying standard in the event and finished nearly 20 seconds ahead of her nearest competitor.

Both athletes surpassed the CAC “B” qualifying standard of 5:20.08.

The 400m medley relays were some of the most productive series of races for Team Bahamas and netted four medals, two golds and two silvers.

The 5k Open Water Swim in all divisions is slated for Saturday morning.