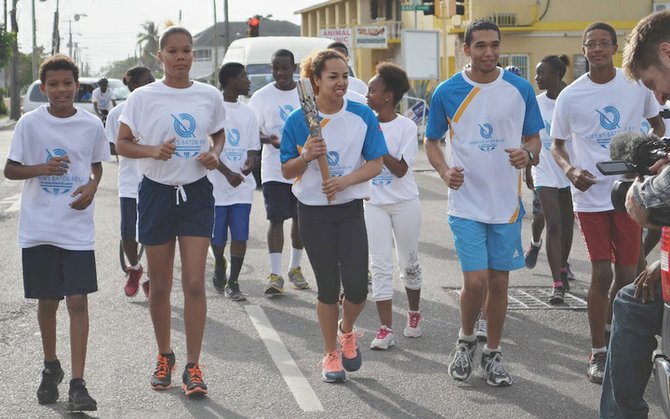 IN addition to being the first Bahamian to win a judo match at an Olympic competition, 19-year-old Cynthia Rahming this week found herself in the international spotlight when she participated in the Queen’s Baton on its relay around the world ahead of the Commonwealth Games in Scotland this July.

Cynthia, along with her father, D’Arcy Rahming, who is head of the Bahamian Judo Association, were interviewed by the BBC (see video below) as it accompanied the baton on its journey.

Mr Rahming, a father of three judo champions – two of his children will be representing the nation at this year’s Commonwealth Games – told the BBC that they have three judo centres on New Providence, but hope to increase that number to 10 by the end of year.

The motivation behind this, he said, is to produce social change through having international standards in sporting competitions, and in judo in particular.

“Judo is perfect, because it’s an international sport and it has all the components of competing against another human being as well as having really high standards. And it can be done from the grassroots, in the city levels, all the way up to the league levels,” Mr Rahming said.

The upcoming competition, he said, is “extremely significant for our sport, since the Commonwealth Games are near and dear to the hearts of the Bahamian people.”

Cynthia’s brother, D’Arcy Rahming, Jr, who will also be competing in July, told the BBC that his family is very honoured to be first to be representing the Bahamas at the Commonwealth Games in the discipline of judo.

Meanwhile, Cynthia recently continued with her quest to compete in the 2016 Summer Olympics by winning silver in the - 57kg female category at the San Antonio Open last month.

It marked her second silver this year, after medalling at the Cherry Blossom Open in Florida in January.