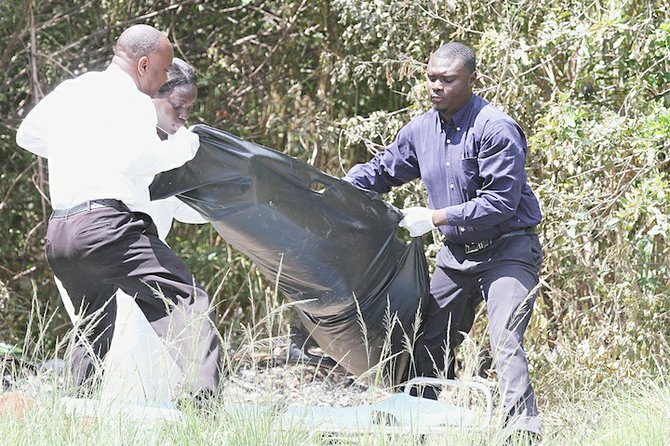 POLICE discovered the burned body of man behind a church off Cowpen Road yesterday. According to reports, a worker alerted police to the discovery at Refuse Court around 10am.

The body was wrapped in a sheet and is estimated to have been there for around 12 hours. An autopsy will be performed to determine the cause of death, as well as DNA analysis.

Police are also still working to determine the race, age, sex and cause of death of the four badly burned bodies discovered last month on Anguilla Cay.

According to Assistant Commissioner of Police Anthony Ferguson, despite earlier media reports, police have not yet classified the deaths.

According to Royal Bahamas Defence Force officials, a forensic team with other officials and officers went to Anguilla Cay, which is in the area of the Cay Sal Bank near Cuba. Earlier this month Lieutenant Commander Raymond King, of the RBDF, said foul play is suspected in the matter because tyres were visibly used to burn the bodies of the victims.

Maybe I watch to many episodes of Bones but I thought at minimum sex and race could be determined from bones or do we not have someone in the Bahamas qualified to do that...

who am I kidding of course not....because everyone want to be a lawyer. LOL!!!

Have we gone deaf or has the government gone deafening quiet about crime in the Bahamas? This country is in what some call the bloodiest period in the country's history and not a word comes from those in charge. Let' not give up hope yet though. Let us at least suspect that our leaders are holding secret talks, private meetings, somewhere to revise and devise strategy to stop if only the murders in the Bahamas (more than 2,200 in 40 years). Let us also hope that the official opposition and the DNA are also planning strategy to deal with crime, should the mantle be placed in their hands, even before 2017.

Apparently and according to Bahamas Press the victim as been identified at Rolley Gibson Jr....and based on this article published in the Tribune 2yrs ago this young man appears to have been no saint.

Of course no one deserves to be murdered and have their body burned, but the saying goes "live by the sword die by the sword" and it seems this young man picked up his sword early and therefore as met an untimely and tragic end as a result.

...let this serve as a lesson to others out there who think crime pays.