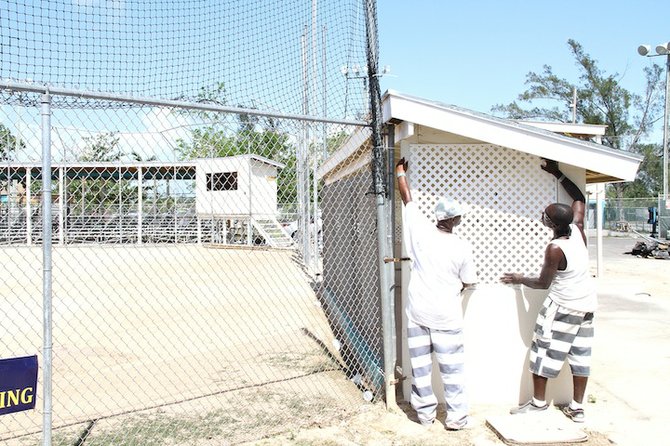 AFTER a massive construction of a new sporting facility at Her Majesty’s Prisons, Fox Hill, Senator Greg Burrows decided to engage the prisoners in a facelift for the softball facilities at the Baillou Hills Sporting Complex.

For the past two weeks, Burrows, along with Jeff Beckles and Anton Sealey from the National Sports Authority, have been utilising the services of prisoners in renovating the Banker’s Field and the softball fields that are used by the Bahamas Government Departmental Softball Association.

Burrows, who has been working closely with the Ministry of Youth, Sports and Culture and the NSA in upgrading the facilities, said when they are finished in about two weeks, the facilities will be just as exciting for the players to participate in as it is for those who use the ones at the prison.

“We have a lot of government facilities to refurbish, particularly the ones that are under the management of the National Sports Authority,” Burrows said. “With my connection to the NSA and my relationship with the prison, I thought it would be a good opportunity to put those two together, given the blessings of Mr Patrick Wright, the prison’s superintendent.

While the latter will require a lot more cooperation from other government agencies, Burrows said the process of getting the inmates to do the work here in New Providence is a much easier sell for the prison.

“So far the work has been going along very good and everybody is pleased,” Burrows said. “Anton Sealey and Jeff Beckles and I have been working on a deadline for the opening of the fast pitch softball and the Government Departmental Softball League. We want to make sure that these are right on track.”

Daily if you pass through the Baillou Hills Sporting Complex, you would notice the prisoners engaged in a complete construction of the stadium, from construction, painting to plumbing in the bleachers, the bathrooms, the scorers booth and the concession stand to the landscaping of the grass.

There is also considerable fencing work being done to the perimeter of the stadium and the playing field. In short order, Burrows said they will also put down a complete new surface for the infield.

“We are going to try and make it look nice,” Burrows said. “We will go around the Sports Complex and make all of the facilities in the Baillou Hills area look nice.”

It may not be comparable to the baseball diamond that Burrows got the prisoners to construct from scratch at Her Majesty’s Prisons. That project got started in November and took about three months to be completed. Burrows got players from his Freedom Farm League to play an exhibition game against the prisoners during a soft opening. That was recently followed with an exhibition between the prisoners and Members of Parliament.

“That was a major project. We started that from zero,” said Burrows of the baseball diamond at Her Majesty’s Prisons. “We are just doing a lot of renovations to Baillou Hills. But when it’s finished, it will be fantastic. We are bringing in clay for the infield, we are putting up a protection on the top of the fence on the outfield. We are putting a pastel colour on the buildings. It will just look so much better when we are finished.”

The project has certainly benefitted the Bahamas Government in that the cost of construction has been reduced drastically, thanks to the hiring of the prisoners. The major cost for the project is basically only the purchasing of the material. There is no cost budgeted for the project.

“What’s so good about this project is that the prisoners are trying to find a way to come out and assist,” Burrows said. “This is an opportunity for them to come out of their cell and into society, so it’s working out quite well for us.”

This is EXACTLY how we should be maintaining our roads, buildings, and public spaces. Let us hope that we see more of this type of initiative going forward. Prisoners are a low-cost resource and should be giving back to the community.