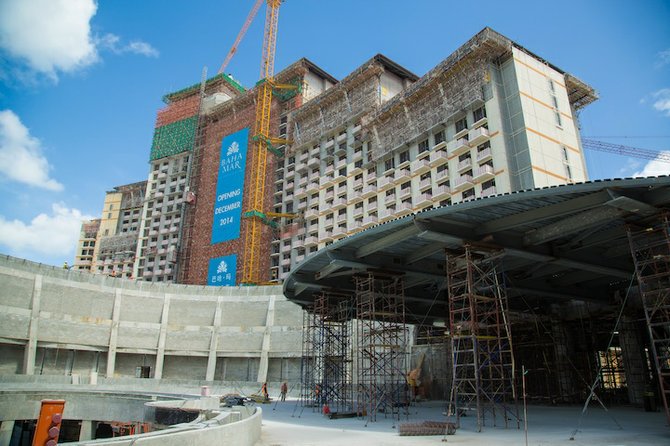 BAHA Mar, the $3.5 billion mega resort at Cable Beach, has delayed its grand opening from the end of this year until “late Spring” 2015. Instead the development is to open in stages from December onwards.

Robert Sands, Baha Mar’s senior vice-president of government and external affairs, told The Tribune yesterday the priority was to “get the guest experience right first time”. He said it was “not uncommon” for projects of Baha Mar’s scale to undergo a phased, or staged, opening and that the push back of the date had not been caused by construction delays or problems.

Baha Mar president Tom Dunlap outlined the developer’s opening plans in a letter to employees yesterday obtained by The Tribune. He wrote that “we expect to have the full Baha Mar destination resort open for our guests” in late Spring 2015.

Mr Dunlap gave no specifics on which parts would open when, and in what order, telling Baha Mar staff: “We are in the process of determining what areas will open at specific dates between December and the Grand Opening celebration. We’re working through the details with our partners, and expect to know more by October.”

Work began three years ago on the development, which includes four new hotels - the Baha Mar Hotel & Casino, the Grand Hyatt, Rosewood and SLS Hotels branded properties - and numerous associated amenities such as a convention centre.

Until recently Baha Mar officials have maintained that the resort would open in full rather than in stages in December. In April the resort’s Chief Marketing Officer Denise Godreau dismissed concerns and in late May, Mr Sands said the December 8 opening date was fixed “and we are progressing very quickly to ensure that happens.” Mr Sands said then the resort was about 80 per cent complete and would start taking room bookings on July 1.

Concerns were raised about a possible delay in the resort’s opening earlier this year after Morgans Hotel Group Management terminated its hotel management agreement with Baha Mar. It was one of three hotel management groups that Baha Mar inked deals with in 2011 to manage its properties.

The Minister for Tourism Obie Wilchcombe said yesterday he was neither surprised nor concerned that Baha Mar will not open in full in December. Despite the recent public assurances from Baha Mar officials, Mr Wilchcombe said that it was always anticipated that the resort would have a “soft” opening in December and open gradually.

“We’re not taken aback by it because they said it,” he said. “That was anticipated. We’ve spoken about that. They’re going to open in December like a preview. That said to me a gradual process. It was left to interpretation. The truth is it’s a mega resort going on there. I would prefer to take our time and stay our course. My team is busy. We feel very good.”

Mr Wilchcombe said he is pleased with the progress the resort is making towards completion. “It helps us in work we have to do in terms of marketing and airlift,” he added. “They’ve begun the process of preparation and training. We’re pleased with airlift response and it’s important we have that in place and rooms occupied along with our product.”

“The truth is it’s going to open,” he said. “But they’re making a strategic move. We’re working with them.”

However Darron Cash, chairman of the Free National Movement, said the delay was disappointing and blamed the government’s failure to implement new gaming laws as a factor.

“It would not be an understatement to say that thousands of Bahamians have been holding out hope that this project would open on schedule and that it would be a significant turnaround in the presently disappointing employment picture,” he said last night.

“We are left to wonder the extent to which the Christie government’s failure to enact an overhaul of our country’s outdated gaming laws had anything to do with this delay. Baha Mar has long been described as a resort development within a casino. The casino - and more importantly a leading edge and competitive casino - is an integral part of the Baha Mar business model.

“We have to think that the government’s failure to update the laws and give Baha Mar the lead time necessary to sell their product might have been a factor in their decision to slow down the rather aggressive pace they had been following.

When complete the resort will include a 100,000 square foot casino, an 18-hole, 72-par Jack Nicklaus Signature Golf Course, an ESPA at Baha Mar spa and more than 12 pools. Officials have said the resort will hire around 4,000 employees this year.

Where will the electricity come from to support both Bahamar and Atlantis? Nassau ya'll do know that Nassau is not generating enough to support both right? Ya think ua have power issues now? Wait! Come spring next year the fun just ga start.....

Get used it Bahamalander's cause in China they have built and left vacant for years - complete cities with100's of apartment and office complexes, shopping malls and hotels, while the lights are always left on, there's not a single resident living in any of these vacant buildings. Mistake Number 1 was Hubert flying back from China after having been slam banged by the red communist Chinese government into agreeing to sign 8100 work permits for Chinese Nationals. Baha Mar's Comrade Executives must have been using the same PR people advising PM Christie's botched numbers rackets and now delayed (canceled) constitutional referendums, when back in May they once again reconfirmed when being questioned by reporters, if Baha Mar would open as planned their response was a quick and firm; "Yes, Baha Mar's December 8, 2014 Grand Opening date was 'fixed" and we are progressing very quickly to ensure that happens.” I've been asking for over two years' "why is it the Chinese government opened a fully-accredited Embassy in our tiny Bahamaland? The US government is equallys curious?

Another of China's Empty "Ghost" Cities

Baha Mar is beginning to look more and more like that big unfinished hotel that has just been sitting for decades very near the defense force base in Coral Harbour. If the new owners of Atlantis do not soon meet with success in their urgent efforts to sell all they own on Paradise Island to the highest bidder, they too will soon be cutting their losses by moth balling their remaining investment or selling it for the nominal sum of $1 to the foolish Ukrainian who grossly over paid them for One-and-Only.

Comrades what you are about to read is the whole truth so help me Hubert. Right about now former Prime Minister Hubert's recent "personal apology" to Baha Mar and the Chinese Government ain't looking so pretty. Comrades this is the same man who told Bahamalander's how he was about to board a flight to China to meet with the Chinese government to read them the riot act - telling the red communists leaders that in no uncertain terms - he would never sign-off as PM, on 8100 work permits for their Chinese nationals to be employed as hourly labourers to mix cement and hammer nails at Baha Mar?

I agree with you on this but I always felt that this humongous project was not need for this lil rock we call New Providence!

I'm more concerned with Perry Christie's plans to Haitianaize our country for votes than what rich boys are doing at Baha Mar.

Absolutely. The Haitians have now even overtaken teenage pregnancy as our number one problem.

This is what happens when you let government people get involved. Don't remember these problems at Atlantis or at the recent LPIA expansion. Pretty soon Bahamians will seek shelter in Haiti from how bad things are going to be here.

cry,cry,cry, cry me a river

SMART DECISION. Thanks, BEC. We are adjusting to our screw ups. Cannot put 4k rooms online at one time in this land and succeed.....hell. no. Wonderful. I cannot wait to eat at the new restaurants.