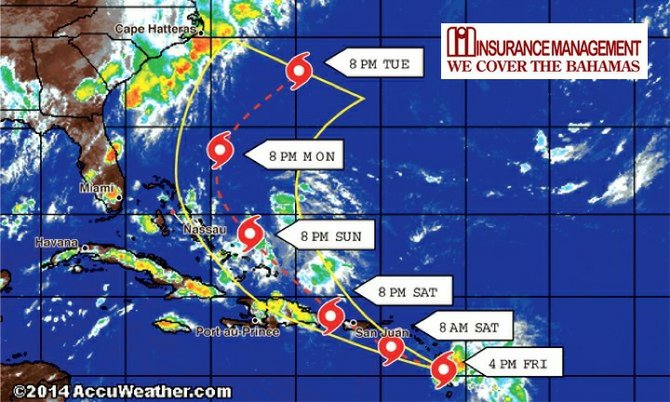 RESIDENTS in the southern and central Bahamas should brace themselves for heavy showers and thunderstorms early tomorrow morning as Tropical Storm Bertha passes through the archipelago.

A Tropical Storm alert was issued yesterday for the Turks and Caicos Islands and the southeast Bahamas, including Acklins, Crooked Island, Long Cay, Mayaguana and Inagua. An alert indicates that tropical storm conditions could affect the islands within 60 hours.

Tropical Storm Bertha formed late on Thursday night about 275 miles east-southeast of Barbados and is tracking quickly toward the Windward Islands, Puerto Rico and the Virgin Islands today.

The storm is then expected to track through the Dominican Republic and southeast Bahamas late tonight night and into tomorrow.

Michael Stubbs, chief Climatological Officer at the Department of Meteorology, said yesterday the central and southeast Bahama Islands will experience heavy showers and thunders from tonight until Monday morning.

“Bertha’s projected path will take it along the Bahamas from the south to the north as it moves around Bermuda.

“Currently it has sustained winds of 45mph and is moving around 20mph so it is a pretty fast moving storm,” he said.

“It will be in the Bahamas on Sunday and affect Turks and Caicos, Inagua, Mayaguana, Acklins, Crooked Islands and Ragged Island.

“There will be mostly rain and windy conditions for most of the day so residents are asked to brace themselves.”

Mr Stubbs said the storm is not expected to intensify or upgrade before it reaches the Bahamas as an area of low pressure aloft  is interacting with the tropical storm, producing wind shear that is hostile for tropical cyclone intensification.

Bertha, the second named storm of the 2014 hurricane season, is forecast to remain a 45-50mph tropical storm through the next five days and is not forecast to become a hurricane.

FOR THE LATEST WEATHER VISIT