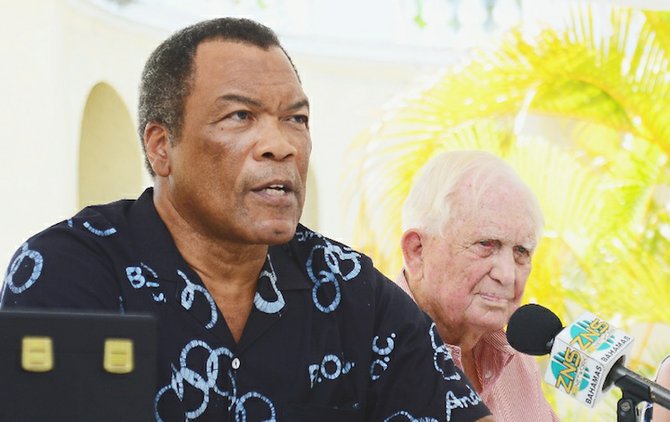 A FITTING HONOUR: Wellington Miller (left), president of the Bahamas Olympic Committee, in conjunction with the Ministry of Sports plan to commemorate the 50th anniversary of the 1964 Tokoyo Olympic Games gold medal performance by Sir Durward Knowles (right) and the late Cecil Cooke. Photo by Lamond Johnson/Tribune Staff

Fifty years ago after they combined to break the barrier as the first Bahamians to win a gold medal in the Olympic Games, the Bahamas Olympic Committee and the Ministry of Youth, Sports and Culture will honour skipper Sir Durward ‘Sea Wolf’ Knowles and his crew member, the late Cecil Cooke, for their historic feat in Tokyo, Japan, in 1964.

In a joint press conference on Wednesday at Montagu Gardens, it was announced by BOC president Wellington Miller that a gala banquet under the theme: ‘Celebrating 50 years of glory in the Bahamas,’ is scheduled for noon on Thursday, October 23, in the Crown Ballroom of Atlantis, Paradise Island.

“Fifty years ago, Sir Durward Knowles along with Cecil Cooke, won a gold medal for the Bahamas and today we are still feeling the effect of it,” Miller said. “Whenever we travel, people ask about Sir Durward and some of his long-time friends remember when they won the gold medal in Tokyo, Japan.”

According to Miller, there will be a number of dignitaries coming in from all over the world, including a senior member of the International Olympic Committee, who will present the President’s medal to Knowles and Cooke.

“We think it’s a good time and appropriate to honour our elder statesmen,” Miller said. “Because of the magnitude of the event, we only feel it’s fitting to highlight the occasion and the tribute to these two great Bahamians, who sacrifice so much to bring home the gold for the Bahamas.”

The witty Knowles, a former vice president of the Bahamas Olympic Association (before it was changed to Committee), said although he’s been fortunate to get all of the recognition as the skipper, he knew that he could not have succeeded without the support of Cooke, who along with his wife was unfortunately killed in a car accident.

“I really think this is a great, great honour that will be held on October 23, recognising the first gold medal that has ever been won by the Bahamas,” Knowles said. “To be fair, I try to be fair in anytime I say it. I always try to be fair with everybody because I didn’t do it all by myself.

“At that time, Cecil Cooke came to sail with me in Tokyo and he asked me what was important to have a crew that keeps you on the edge. It’s amazing how Cecil and I sailed together, but he was the joy of the party. He kept the people in the hotel amused. I’m very sorry that he could not be here today.”

On the recognition for both of them, Knowles said he’s thrilled that all of the sporting bodies and the minister of sports will be there for the ceremony.

“I appreciate Cecil being in the boat with me,” Knowles said. “Without Cecil, the medal would not have been won. That’s how far it goes. I’m not taking full credit for sailing the boat. But the first people the reporters talk to is the skipper. I take the responsibility.”

Sandra Cooke, representing her deceased father, said their family is totally honoured for the banquet to recognise the two greatest Bahamian sailors ever.

“I don’t think there will be another, at least not in the Star Class sailing,” she said. “So we’re looking forward to October 23, hoping that all Bahamians come out and partake in this and celebrate the victory of winning the first ever Olympic gold in sailing. I thank you very much because we are very proud of him and he will finally get his recognition, something that he didn’t get before he left us.”

Minister of Youth, Sports and Culture Dr Daniel Johnson said it’s going to be a very commemorative event for Knowles and Cooke.

“For Cecil Cooke, we might have to give him his knighthood posthumously,” Johnson revealed. “Here in the Bahamas, we always forget that we always win together. I think the theme of Sir Durward’s life, which he now calls ‘One Bahamas,’ is what I call ‘Team Bahamas.’

“Our success around the world has really never been as individuals, as Sir Durward is trying to point out. We saw the early success of our relay teams in the World Championships and the Olympic Games. If you notice, our most successful ventures have been as a team.”

Johnson said it was a winning combo with Knowles and Cooke and that is why they should be recognised together for their effort.

“Beyond celebrating that team and the sport of sailing and what our prowess has brought to us as a country, is the theme of One Bahamas. We will move forward, get higher, but it’s only if we do it together. So today on this occasion, we celebrate the achievement of Sir Durward Knowles and Cecil Cooke.”

Fifty years later, Johnson said they are finally giving the recognition that both Knowles and Cooke deserve for their accomplishments.

Kevin Colebrooke, a senior officer in the Ministry of Sports, said he’s proud to be a part of the momentous occasion.

“It was indeed quite an accomplishment for the Bahamas and for sailing,” Colebrooke said. “Sir Durward, you undoubtedly have set the pace for us to follow. We would like to thank you for your contribution to sailing and the contribution that you continue to make.”

Colebrooke said Knowles’ name will continue to remain in the almanac in the Bahamas as a true statesman and sportsman.