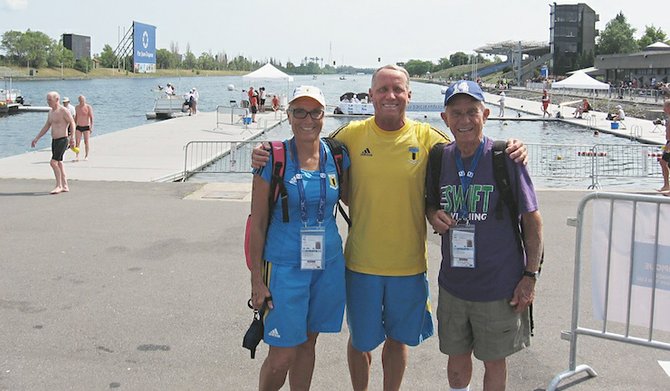 SIX members of Swift swimming represented the Bahamas well at the World Masters Championships. The World Championships highlight both the club and country at the worlds’ largest meet.

A total of 7,794 competitors representing 101 countries gathered in Montreal. More than 6,000 swimmers hit the pool at the Parc Jean-Drapeau Aquatic Complex on Ste-Helene Island while another 1,370 took to the open water race in the rowing basin located on Notre-Dame Island.

A few from the Bahamas, Nigeria, Greece, Singapore, Senegal, Fiji, Tunisia, Bolivia and Moldova also made the trip, making the World Masters a truly universal experience.

The swimming competition kicked off on August 3 and offered 20 events, including 4 x 50m mixed medley and freestyle events, a 3km race took place in open water on August 10, water polo games were held July 27 to August 2, divers competed on the 1m, 3m and 10m boards starting August 5 and the synchronised swimming events were held July 28 to August 2 with solo, duet, team and free combination.

The fourth day was active with Lisa, Nancy, and Percy starting the day off with the 50 free in 37, 38, and 52 seconds respectively.

On Friday, August 8, the sixth day, Percy started things off with the 200 breast in 4:56, followed by Nancy, who finished the day with the 200 fly in 4:07 - both swims were big improvements.

Saturday, the 7th and final day at the pool, saw the swimming start off with Bruce and Lisa swimming the 50 back in 37 and 47 respectively. The day finished with Andy and Nancy swimming the 400 free in 4:53 and 6:49 respectively.

Sunday, August 10, was open water swimming with the 3K open water race. Andy finished with a 7th in his age group in 43.02 and Nancy finished 35th in 1:03.0. During the meet Percy, Andy, and Bruce were interviewed on TV to be later shown on the FINA website.

Andy and Bruce were the first swimmers to represent the Bahamas at the Olympic Games in Montreal some 38 years ago in 1976 and Percy, their father, was the coach. Some 38 years later, the three were back again competing in swimming. Swift continues to set the standard in Masters swimming.