Deputy Pm Calls On Rollins To ‘Do The Honourable Thing’ 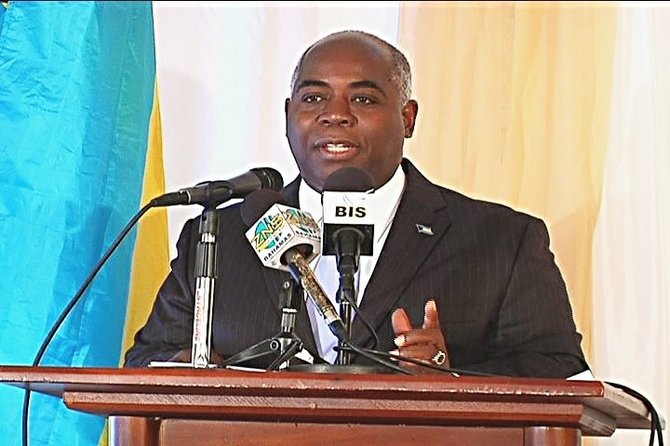 AFTER earlier signalling that he intended to deal with concerns about clashes with PLP backbenchers during an upcoming caucus meeting, Deputy Prime Minister Philip ‘Brave’ Davis spoke publicly in the House yesterday on the matter.

After fiery debate between backbenchers and party members, Mr Davis stood and addressed Fort Charlotte MP Dr Andre Rollins, inviting him to “do the honourable thing”. Rollins retorted that it was impossible for him to resign from his gaming board position because those appointments had expired in July and therefore he was not technically on the board at present.

Speaking earlier in the day, Mr Davis responded after being was asked to state his opinions on Dr Rollins and Marco City MP Greg Moss, who have not held back in hurling criticisms at the Christie administration recently. On several instances within a week, both men have clashed with senior PLPs in the House of Assembly. Mr Moss and Prime Minister Perry Christie also faced off in the House on Tuesday.

“I don’t wish to comment publicly on the matter of Greg Moss or Andre Rollins, but I do have some views on the matter and I will share that in the internal party machinery when the time comes and the topic arises,” Mr Davis said yesterday.

On Tuesday, Mr Moss directed comments toward Mr Christie, by suggesting that he was not afraid of anyone in the face of what he perceived as threats from the Prime Minister and leader of the PLP over criticism of the government.

His comments led Fox Hill MP Fred Mitchell and Cat Island, Rum Cay and San Salvador MP Philip Davis to defend the prime minister, who at the time was absent from the lower chamber. Mr Christie returned a short time later and rebutted the statements. This led to a back and forth between Mr Moss and Mr Christie over the matter.

“It troubles me, when in respect to one of the sets of bills (before the House), members of my party make statements that there are consequences for a member of Parliament getting up in this House and expressing his conscience on a Bill,” Mr Moss said on Tuesday, during debate on value added tax legislation.

“That happened in this House when the member for Centreville, who is my leader, said that happened when two other members who sit in the Cabinet said things that are very close to that. I would be gravely misunderstood if I did not respond to that.

“...I want to be clear that my absolute dedication to the idea of deepening this democracy – it will not waiver, is undeterred, is unmoved by that kind of talk. I do not fear men. The Lord is my light and my salvation, whom shall I fear? The strength of my life of whom shall I be afraid? How much bigger than me are you? Your ideas may be bigger, but what we do in here of sharpening each others skills in the debate and the standard of debate is important.”

He went on to blast the government not only for forging ahead with imposing VAT on January 1, 2015, but he took the government to task for failing to bring “compassionate” legislation to the House of Assembly. He suggested that the Christie administration was not serious about effective governance.

On Monday, Dr Rollins and Marathon MP Jerome Fitzgerald got into a heated row in which they hurled insults at each other leading House Speaker Dr Kendal Major to shout over both men as he stood to his feet to regain control of the proceedings.

Mr Fitzgerald had said he wanted nothing to do with “new generation” thinkers of the party who have disagreed with the government on the proposed constitutional amendment bills. Mr Rollins said it was a personal attack against him.

why dont u, leslie , christie, shane and wells to the right thing as well and RESIGN.

How about you resign? Stealing all that money from your clients, getting international press what do you know about honor Deputy Prime minister? Atleast someone had the decency to consider the Bahamian people while you guys were secretly passing constitution bills.

Stand firm Dr. Rollins. You were elected by your constituents not Christie.

Go to hell Brave Davis and take Christie & Fitzgerald with you.

I can't, I just can't!! This man shouldn't open his mouth to talk about honour! Please do the honourable thing and resign; ride off into the sunset and take your ill-gotten millions and enjoy them but don't forget to take your pathetic leader with you along with your other crony colleagues, Gibson, Fitzgerald, Miller, Wilchcombe and the young um who you'll breaking in, Wells!! Please, please just do it for the sake of our minds and the country!!

The little goat opens his mouth and speaks nonsense yet again, talking about doing the honourable thing, he knows nothing of that. If that's the case most of you should've resigned a long time ago... Christie being the first. Smt... can't wait for these losers to go away.

WELL MUDDA SICK. . .LOOK WHO ASKING SOMEONE TO DO THE HONORABLE THING. . .A DPM WHO CANT EVEN GO OUTSIDE OF THE BAHAMAS WITHOUT LOOKING OVA HIS SHOULDER! PEOPLE NEED TO ASK THAT DUDE WHY HE NEVER GOES GLOB TROTTING LIKE THEM OTHER MINISTERS DEM DOES DO?

I think we need to put together and buy mr D a ticket to Florida and then call Nick Navarro them and tell them he coming!!! This dude defend bill and tax duckers. . .LOI signers without CABINET permission and now he want to trow this bouy under the bus for telling PC what we all know. . .HE HEAD DONE GONE!!!

And, you thought Minnis and Loretta were the only ones washing their dirty leadership laundry in public? Comrades here's my personal take on why Dr. Andre has not taken what many believe is the 'honourable things' he must now take. To resign from not only the gaming board and without beating around the bush with his silly excuses but also from his House of Assembly seat, after all - wasn't he elected by PLP votes cast in the Fort Charlotte constituency. Understandably so, it may have something to do with the great uncertainty which reigns over the PLP's ship, as to who in the hell is the real Captain, Comrade Dr. Rollins is to 'fish or cut bait' with? Is it PM Christie or is it his DPM “Brave?”

An unbelievable Amen may be necessary!