Making Her Mark At The Top Of The Trade 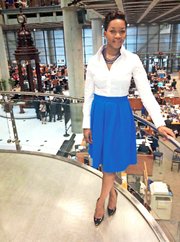 A YOUNG Bahamian woman has made history by being the first Bahamian to work for one of the world’s most prestigious insurance brokers.

Deandra Major, 25, is the first Bahamian woman to earn a place at Lloyd’s Broker, Endeavour Insurance Services, in London, the world’s specialist insurance market and largest surplus lines insurer in the United States.

“I can hardly believe how well everything has worked out for me,” she said.

Ms Major started out as an office assistant with Morgan-White Administrators Bahamas while still a student at the College of the Bahamas. She spent the next five years working at MWAB under the tutelage of her employer David Reynolds, a 50-year veteran of the Bahamas and London insurance markets.

However, according to Ms Major, it wasn’t long before she began to yearn for the opportunity to broaden her horizons.

“As I became more knowledgeable about insurance, I made it known to Mr Reynolds that I was interested in turning my job into a career,” she said. “He helped me from then on with my studies and exams leading to a professional insurance qualification.”

Upon completion of her studies at COB, Mr Reynolds was instrumental in securing Ms Major an opportunity that would provide her with the exposure that she so desperately craved. He spearheaded the drive to sponsor her further training in the United Kingdom.

“From the start, we recognised that Deandra had a good work ethic along with ambition and carefully defined goals,” he said. “Following the successful completion of her initial diploma, I felt an internship in London would really broaden her work experience. We were fortunate in finding a temporary job placement for her with Lloyd’s brokers, Endeavour Insurance Services in London.”

Ms Major said that in the first month of her internship she was assigned to the claims office and given an opportunity to work with the Lloyd’s brokering team. She said she “thoroughly enjoyed” meeting and negotiating with the individual writers, and it wasn’t long before her superior’s were impressed with her ability as a broker.

“I must have met the expectations of my employers because they asked if I could stay longer,” she said. “I didn’t hesitate. Earlier this year, Endeavour’s senior management called me in and told me that they felt that I had a lot more to offer and that I had become an asset to the company. I was offered a permanent job as a Lloyd’s placing broker. I felt that my boss in Nassau would be supportive and so again I didn’t hesitate – I accepted immediately.”

Ms Major said she hopes to bring back to the Bahamas “a wealth of technical knowledge and experience gained from working in the world’s leading insurance market,” which she plans to share with others.

She hopes that the exposure combined with professional qualifications will eventually land her a senior position in The Bahamas, either in the commercial insurance market or in the public sector as an insurance and financial services regulator.

She returns to London on Tuesday to start her career as a Lloyd’s placing broker.

I'm revisiting this topic, only because others are making a HUGE deal about the fact that I corrected an error made by two major newspapers. FACT: I worked as a facultative reinsurance broker wt Ballantyne Mckean & Sullivan in 2001. There, I broke for millions & millions of dollars for companies that I will not mention for their own protection. I corrected that story for a very important reason. We may seem like a small country but there is so much power that emanates from us in terms of our history, and from the type of people that hail from our shores; people like Sir Sidney Poitier, Beyoncé﻿ and the list goes on and on. If we allow our minds to contract to the point of believing that we are just now doing things that were done by Bahamians decades ago, it's a sign of regression. Saying that she is the 1st to do something done by persons who preceded me is like Christopher Columbus landing on San Salvador and saying "Now this place exists because I stepped on it." Remember please, that people from all over the world live here. If they look upon us as doing something in 2014 that people from other small countries did decades ago, it makes it seem like we are advancing at a snail's pace. If it was important enough to print twice, then it's important enough to be corrected.