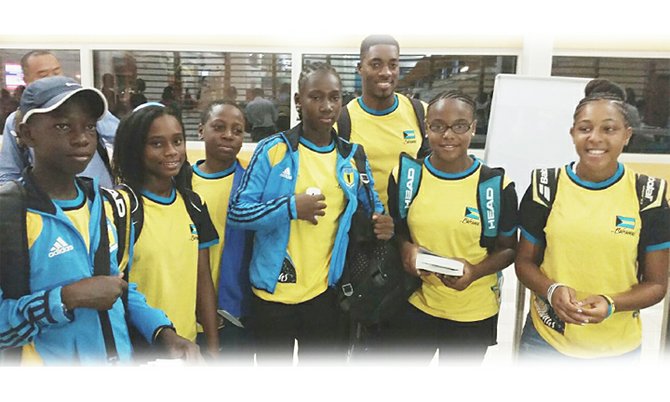 THE Bahamas Lawn Tennis Association (BLTA) is pleased to announce that our 16 and 14-and-under JITIC national teams returned home from San Salvador, El Salvador, where they played August 17-25 respectively with a refocused commitment to heighten their game.

JITIC is a regional tournament for Central American and Caribbean countries.The 7-member 16-and-under team, with the girls’ No. 1 seed Iesha Shepherd capturing 4th place in a 32-main draw, was a huge feat for the Bahamas.

Shepherd lost in the semi-finals 4-6, 4-6 to the No.1 seed in the tournament, Mishelle Cordero of Guatemala. However, her best match of the tournament 6-2, 6-2 was against Cyd Melendez of Puerto Rico.

Daxon, the 16U team’s youngest player, made it to the main draw as well and performed her best 6-2, 6-1 against Alesandra Echandia of Puerto Rico.

Missick fell short of making the main draw, but gave her best performance in a 32-draw consolation round with a 6-2, 6-1 performance against Gabriela Renderos of El Salvador.

In the boys’16U team, Thompson advanced to the consolation finals, but fell short of the win 3-6, 2-6 against Shandor Gomez of Puerto Rico.

However, he played his best match 6-2, 6-1 against Oscar Ramirez of El Salvador.

After completion of the 16 & Under JITIC Tournament, Bahamas’ 4-member 14 & Under girls’ team was determined to make their presence felt as they reigned supreme amongst the Caribbean countries. The Bahamas had the most number of girls from the Caribbean making the main draw.

The trio of Sydney Calrke, Sierra Donaldson and Sydni Kerr were ready to take their A-game to the tennis courts as they played their best matches of the tournament.

Elana Mackey, the youngest player, fell short of making the main draw but redeemed herself by winning the girls’ consolation in a 16-draw by def. MA Ajong Anouk from Suriname 6-1, 6-0.

Mackey also teamed up with Clarke as they won the girls’ consolation doubles 6-4, 6-3 by defeating Zuilay Castaneda and Maria Cossio from Panama.

The two-member boys’ team of Dont� Armbrister and Trenton Fowler fell short of the main draw but stood tall to the players of both the Caribbean and Central American countries.

Armbrister advanced to the semi-finals of the boys’ consolation, but was defeated in a tight match 7-5, 4-6, 8-10 by Torres Guillermo of Puerto Rico.

The overall performances of both the 16 and 14-and-under teams are commendable.

BLTA executives and team captains Ashwood Hall (Freeport) and Ceron Rolle are ready to get the ball rolling in taking the teams to the next level as they ready the players to make an even better showing at next year’s JITIC Tournament.

There were 23 countries represented at JITIC which showcased “the best of the best” in the region.

I'm proud of the 2014 Under 14 boys/girls team that went off this year to El Salvador to represent the Bahamas. All came back in perfect health and express how a wonderful experience they had over there. The Coach and parents that went along with my son (Trenton Fowler) and the other team members. I'll like to say thanks for your guidance and protection over him and the other children.