Pregnant Women Claim They Were Beaten By Defence Force Officers 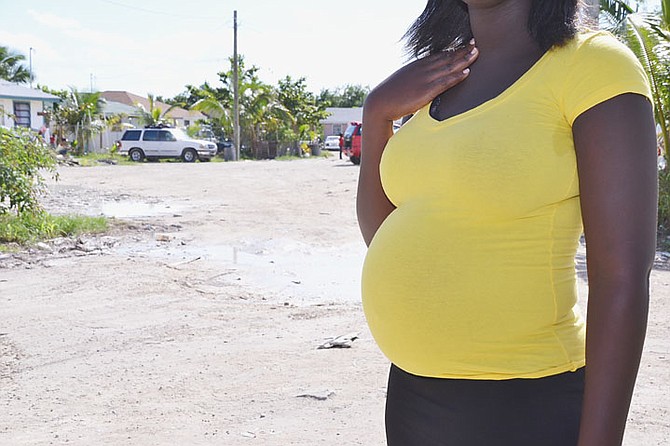 Rose St Fleur, 29, in the shanty town area where she lives, off Carmichael Road.

TWO pregnant Bahamian women complained they were dragged and beaten by officials during an immigration raid weeks before the enforcement of the government’s new immigration policy.

As international controversy over the stricter regulations continues, shanty town residents hit out at the verbal and physical abuse experienced by persons of Haitian descent during enforcement exercises.

Rose St Fleur was eight months pregnant when Royal Bahamas Defence Force officers allegedly grabbed her, pushed her to the ground, and dragged her several yards from the back room of her home in a shanty town off Carmichael Road, and onto the yellow school bus designated for transport to the Carmichael Road Detention Centre.

Later that same day, Defence Force officers also arrested six-months pregnant Charline Frederic in the same manner. Ms Frederic had recently been released from hospital due to complications in her pregnancy that made it difficult for her to walk. She claimed that she was dragged through her shanty town off Joe Farrington Road.

The two women, and several witnesses, recounted their horrific experiences of being detained and degraded by officials during a series of interviews over the weekend.

Central to each woman’s experience was a female RBDF officer, who allegedly beat and harassed both women.

Both women could not recall the exact date of the incident; however they confirmed that it was on a Monday, a few weeks before November 1.

Ms St Fleur, 29, said she was in the back room of her home when a male RBDF officer entered the room and asked her for her passport sometime around 10am. She said that she was aware that immigration officials were in the area, but was not concerned because she was a Bahamian citizen and her home was usually overlooked during raids in the area. She told the officer that she did not have her passport because her sister had taken it to get a police record for her, to which the officer responded that it was mandatory for her to keep her passport in her possession at all times.

Ms St Fleur said the officers dragged her onto the bus and bound her hands using plastic ties. She said she was punched in her head and pushed to the back of the bus, where a female RBDF officer began harassing her.

“This lady started verbally abusing me at first saying all kinds of negative stuff,” she said, “that she would take my passport and tear my passport and I tried to defend myself back. She said all of us (Haitians) need to go back and eat shit, and when y’all in Haiti y’all is be getting rape and now ya’ll in the Bahamas. Then she called for some gloves, so she put two gloves in her hand and she came and sat next to me.

“Then she was like ‘get me something, let me shut her up’, so they grabbed a head cloth from another lady they apprehended and she wrapped the head cloth around her hand and she pressed it down against my mouth.”

Some time later, Ms St Fleur said a male officer asked her if she wanted a drink of water. However, the female officer refused to give it to her.

“She was like ‘no we’re not giving Rose any water’,” she said, “so all day from 10am to 4pm I was on the bus. They went all over the place, Joe Farrington Road and then they came back to the Detention Centre.”

Ms Frederic said she was standing out front in the yard when the yellow immigration bus drove into the shanty town off Joe Farrington Road sometime around 1pm. She said officers asked her if she was “straight”, to which she replied “yes”. The pregnant mother of three said she had her Bahamian passport in her possession. Ms Frederic said her brother-in-law, Mark Souffrant, who is a Bahamian, was also out front, but he was drunk and did not cooperate with the officers. Mr Souffrant struggled with the officers, who handcuffed him and then began to beat him as he lay on the floor, she said.

Ms Frederic said at that time she told officers that she would report them, and left to assist others in securing the homes of relatives that had been arrested. She was in the home of her cousin when an RBDF officer accused her of stealing, which she denied.

“I said I’m not trying to theif, I’m trying to help her,” Ms Frederic said. “I said ya’ll the ones that start breaking down people door, that’s why anyone can go in. So he handcuffed me and dragged me, he say ‘oh, that’s you who was having hard mouth from over there’. I said I wasn’t having hard mouth I’m just going to report how ya’ll beating the man.

“He dragged me straight to the front and I told him I’m pregnant, he say ‘I don’t effing care’. My foot was swollen, I have these things on my feet and he was dragging me.”

The RBDF officer continued to drag Ms Frederic until she was at the front of the bus. By then a crowd had gathered to protest her arrest.

As a result of the confusion, Ms Frederic said the commanding officer did not ask to see her identification. Instead he told the officer they would sort it out when they got to the Detention Centre.

However, Ms Frederic said when the bus pulled out of her community, it stopped a short while later on the side of the road and several RBDF officers got off another yellow bus, and came onto the smaller bus where she was the only passenger.

“Everybody else had the plastic ties, I had the real handcuffs and they were tight. The lady came off the yellow bus and came on my bus and said Jesus she couldn’t breathe because the Haitian people them so stink on the bus. Only RBDF officers were on the bus with me. She asked what about this one? They said, oh this the hard mouth one right here, so she come and she push me and said slide over.”

Ms Frederic said the female RBDF officer continued to badger her, offering her water and then throwing it over her.

“I said ok, ya’ll could do whatever ya’ll want to me, but I know where to go for ya’ll, and then she said something else and as soon as I said something the next thing I felt was one blow on the side of my face,” she said.

Ms Frederic said that when the female officer struck her the first time, her hands were handcuffed to the front and she was able to hold the woman back. However, another officer then switched her handcuffs so that her hands were behind her back.

“The woman just started punching me from left to right, the two sides of my face was swollen. She just kept on hitting me and hitting me, I said I’m going to report this and they said oh they don’t effing care, ain’t nothing gone happen. The officer who was driving said ‘if it was up to me, I would let her beat you, and beat you’.”

Ms Frederic said: “The only thing I feared was that she was going to continue to beat me, I was a little scared because I’m pregnant and I just give God thanks that she didn’t hit me in my belly, she only hit me in my face.”

When the women arrived at the detention centre, they were both dehydrated and in pain.

Their testimony comes as the country faces international scrutiny over the new immigration policy implemented on November 1.

Ms St Fleur said she was apprehended a second time on November 1 while driving her car, which was licensed in her name. She did not have her passport with her. She said that when she told the immigration officer her last name, she was immediately put on the bus.

However, she said the second bus ride was much smoother as immigration officers were respectful and she did not question her arrest.

Both women said it was the first time they had been arrested in a raid, and that the experience was life-changing. The psychological effects of the incident are far-reaching, according to Ms St Fleur, who said her five-year-old daughter, Romika Paterson, witnessed part of the ordeal.

Ms St Fleur said: “I have a daughter growing up and I wouldn’t want the same thing happening to her. She saw when they dragged me and then she was like ‘mommy, this lady who did this to you, I saw don’t worry mommy when I grow up I’m going to do the same thing she did to you’. I don’t want that for her.

“She always be like mommy will immigration pick me up too?”

Ms St Fleur said the ordeal has made her a recluse, and suspicious of meeting new people.

The Tribune also interviewed Mr Souffrant, a 42-year-old carpenter and father of seven, and several other residents. Their accounts will be published in a later report.

Both women have filed complaints against the female RBDF officer, whose name has been withheld.

If this is true it is wrong. Shanty towns are also wrong. The laws of the Bahamas should be obeyed by all. some people are really great at making up stories and the Tribune just love to buy into them.

You are giving the person or persons who reported this incident the benefit of the doubt while at the same time insinuating that they are not telling the truth. Interesting...But what could the Tribune get from 'buying' a made up story?

birdiestrachan, why would these women make up stories? They are both Bahamian citizens, what could they possibly gain by lying - and putting themselves at risk of victimization by using giving their names?

It's a complete lie,why has it taking so long to get in this newspaper,since it happened before Nov. 1st, both females cannot even recall the day it happened,sensationalized,slander,now the Haitians will use this as an example,utter disgrace.

I don't know if what she says is true but what is the sister doing taking the passport that is not hers to get a police report? The officer was right in telling her that it is mandatory that the passport is to be in her possession at all times. Her response was she didn't know she had to walk with it 24/7. That response in itself is ignorant. No one is supposed to let anyone have access to their passport. Also she says she started to go back outside to wash. Seems to me she was trying to ignore the officer and her responses about the sister and going outside seemed like she had something to hide and probably had an attitude instead of remaining calm.

Please show me the law that requires a Bahamian citizen who chooses not to travel internationally to have a passport - let alone carry it on their person 24/7.

@Required - absolutely correct. In fact, I believe its a violation of the constitution to require such a thing. As far as lucaya's comment is concerned, the ladies never said anything, because like most people of Haitian descent around here, they were afraid. The Tribune, I am sure, had to pry these stories out of them.