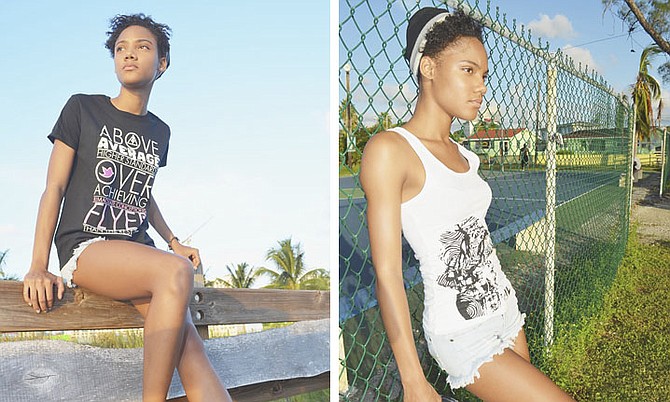 FOR THE past weeks, the hashtag after nearly every post on the Illmaculate Conceptions Facebook page read “#comingsoon”. It was letting Bahamian fashion lovers know that a new clothing label was about to make its debut.

After two years of trial and error, the creators of Illmaculate Conceptions officially launched the brand during a special event at Bacardi Lounge last weekend. A mini fashion show revealed some of the unique T-shirts in the line for both men and women that feature Afro-centric and Afro-European designs among others.

The mastermind behind Illmaculate Conceptions, graphic designer Graham Wilson, told Tribune Arts and Entertainment that the launch of the line signifies a dream coming true.

“I started posting stuff on Facebook and I used to get a lot of feedback from people who thought the designs that I created should have been on a shirt. I heard it so many times and I thought, ‘What is really stopping me from launching a clothing line?’ I talked to a few of my friends and they gave me ideas and concepts. From there I just jumped right into it,” he said.

“I kept making designs and I would let my friends see them and we would go back and forth with any changes. About two years ago we printed up two shirts just to see if people would like them. Then we went to Jollification wearing the shirts, just to see if people would like them and there was a good response. There were about 10 of us at the event with all of the shirts on and people began asking us why we were wearing the shirts. They also wanted to know where they could get the shirts. So we saw that there was definite interest in what we created and that was when we began taking a serious approach to the line.”

There is, of course, a spiritual inspiration behind the line’s name. It references the Catholic Church’s belief in the conception of the Blessed Virgin Mary in her mother’s womb free from original sin.

“Everyone has heard about the Immaculate Conception. A while back me and my friends would use the term ‘ill’ to describe anything that was new, hip and that inspired us. We would say that is an ‘ill’ concept. So like Mary and Jesus are described as an immaculate conception, I am trying to achieve the pinnacle of an ‘ill’ concept with the line,” he said.

Graham said they are targeting intelligent young men and women with their new label.

“We are going after the enlightened minds, conscious young men and women, young professional, intelligent people,” he said.

Since we are after this kind of person we have a lot of Afro-centric designs and a mix of ancient and modern designs. I teamed up with a young artists by the name of Ashley Cooper who created the female designs for the shirts and her designs are very Afro-Centric. There are also some Afro-Euro centric designs in it as well. There is a deeper meaning behind each and every one of those designs on the shirts.”

Although the line just launched, Graham said he and his team are already working to add new pieces to Illmaculate Conception.

“We are just doing T-shirts now, but next year we will look into doing polos and button-up shirts. We are also trying to do the international launch with the website. I have already checked out websites like Dr Jays to see how I can get the line on the website. As for right now I am focused on trade marking and copyrighting,” he said.

In addition to being a graphic designer, Graham is also a photographer and recently launched a marketing and design company called the Catalyst Group.