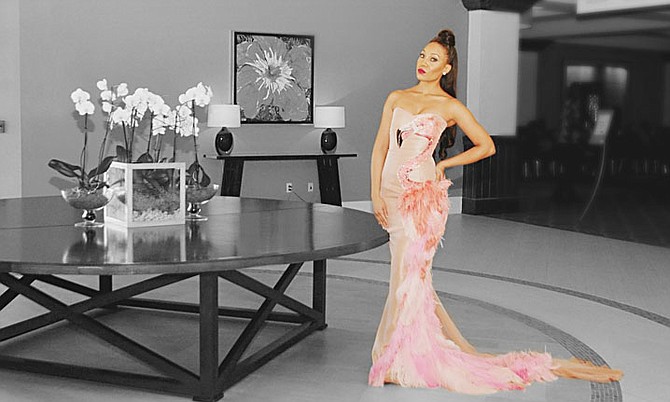 BAHAMIAN designer Javotte Bethel is getting ready to unveil some her newest creations during an inaugural couture fashion show.

After a year of planning feverishly, Javotte said she is ready “to express her explosion of talent” in a haute couture showcase which will honour 12 Bahamian women, legends and matriarchs. This event will be held under the patronage of Bernadette Christie, wife of the Prime Minister Perry Christie. It will be held on December 21 at the Meliá Nassau Beach Resort.

“I wanted to give the show meaning and decided to honour Bahamian women whom I admire. The first part of this show will actually be paying homage to those women,” Javotte said.

The upcoming fashion show will include 50 pieces from the designer.

“The theme of Events of Lifetime’s (my company) inaugural fashion show represents the inspiration that was taken from the concept of the alpha and omega,” said Javotte. “Part one will feature variations of the national flower in haute couture fashion. Part two will transition into the flamingo theme. These national symbols represent a kind of patriotic tribute that I always wanted to do. I don’t see a strong enough emphasis being placed on knowing our national symbols. They are beautiful and underappreciated. The finale, part three, the alpha and omega, the beginning and the end, will represent ‘the blood’ and ‘the resurrection’.”

Persons who have inspired Javotte on her journey of creation include both Bahamian and international designers.

“Locally, we have incredible talents. For years I’ve admired the works of Rachelle Garcia. I like the work of Sabrina Francis, Jeff St John, David Rolle, and many others. On the International scene, Jean Paul Gaultier, Atelier Versace, Stephanie Rolland, John Galliano and St Pucchi are my headliners. Now, I don’t often call anyone’s name specifically because those who I admire truly bring something to the table that makes me say ‘interesting’ or ‘wow’, but I am always trying to express a message or a point of view based upon my love for beautiful things. I am always being inspired by the beauty of my surroundings and the awesome creativity of nature. This is what you see captured in my work,” she said.

“Giving back is important to me. The Red Dress Soirée was meaningful in that it helped children suffering with the deadly HIV/AIDS virus. My model, Lady Ellis, is a wonderful person to work with.  Many don’t know this, but she has an awesome sense of humour. I also enjoyed meeting and seeing all of the seasoned and contemporary designers in one room. The mutual respect among the designers was very much appreciated,” Javotte said.

“This year we will be donating part proceeds from our show to the local REACH organisation, which is an organisation that specifically assists children affected by autism,” she said.

Tickets for the event are available at Commonwealth Fabric and Ann’s Bridal; they are priced at $100.

The cocktail reception will begin at 6pm and the show starts promptly at 7.30pm. There will also be booths featuring art on display. For more information, contact 698-6935; 465-6573 or e-mail javottebethell@gmail.com.