Passport to a better future? 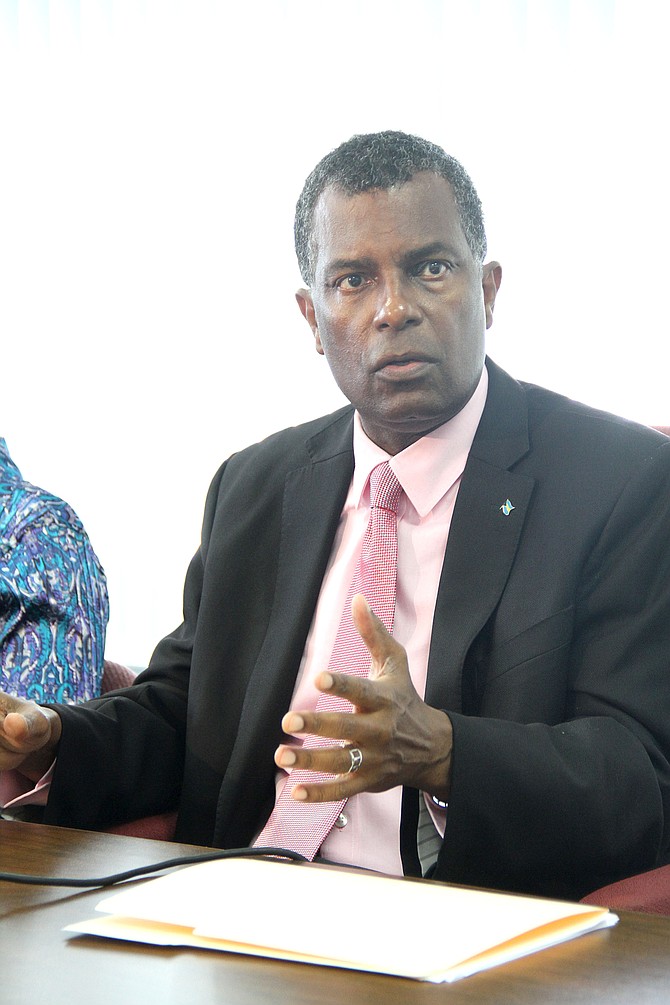 Minister of Foreign Affairs and Immigration Fred Mitchell at a press conference at the Department of Immigration on Sunday. 

For more than 20 years, Haitian parents living in the Bahamas have spun a fearful bedtime narrative of an oppressive immigration regime to their children born on local soil.

Like a fitting campfire spook, they recounted eras past of living in constant anticipation of being snatched from their legally documented loved ones in discriminatory midnight raids and whisked back to a country they had long since chosen to rebuke. Their houses and personal belongings stolen or destroyed, their self-respect and dignity desecrated without recourse.

These children, fat off a healthy suspicion of law enforcement and starved of social inclusion, are now in their mid-20s. We have entered the third generation of the descendants of the Loftus Roker age, and the name and legacy of the former Minister of Immigration has resurfaced with polarising effect in the contentious wake of the government’s new immigration policy.

Some believe that the November 1 policy is another vehicle of “Bahamianisation”, others call it a welcome distraction from ineffective crime strategies and the economic hysteria closely approaching with the introduction of Value Added Tax.

The government has maintained that it is a necessary measure - I agree; further insisting that its timing and scope are non-discriminatory and humane - I disagree.

Since the new policy was announced on September 17, the primary issue that emerged seemed to be the direct result of an international and local public relations problem. Fred Mitchell, the Immigration Minister, refused to provide further operational details of the policy or answer questions on the impact its application would have on the thousands who occupy the country’s vast status-grey area. Titbits were instead scavenged from scant radio talk show appearances.

Then on November 1 officials made the unfortunate blunder, or jackpot in the political realm, of inviting the media to accompany its inaugural enforcement exercise. Without brow beating the delayed knee-jerk reaction to this long standing issue of “roundups”, photos of children being led away by immigration officers caught the eye of human rights barons and forced a host of international activists onto some prominent soapboxes. Rather than appear beholden to the very same organisations that have pressured the country to get a grip on its undocumented migrant population, Mr Mitchell met criticisms with little explanation or credence.

The first glimmer that international observations may have broken through the steely resolve of the government is a recent announcement that officials are preparing legislation to support the changes, and also considering dedicating a separate facility to process people with children. When asked whether or not this was a direct result of concerns, Mr Mitchell responded that it was simply what the Prime Minister requested. He has maintained that his policy has an 85 per cent approval rating and unanimous support from all mainstream political parties - something he remarked was unable to be achieved even for women’s suffrage.

Mr Mitchell has also distanced himself on many occasions from comparisons to Mr Roker in the aftermath of this new policy, and has insisted that he does not consider himself to be a central figure as if pre-empting the natural suspicions that this latest measure is a unsustainable political stunt. However, the rousing applause as he ascended the platform at last month’s Progressive Liberal Party caucus meeting to inform delegates on the new initiative sends a different message.

A message that people residing in shanty towns, of varying economic status, can set their election campaign watches by.

In a recent interview, a shanty town resident said: “You know how much times growing up with my mommy, watching them standing up and hauling the Haitian people on the bus like animals. This all we know growing up, this is all we know and this is home. The sad part about it is I have friends, people who have applied to the government at the required age and some are 30 years old now, some are even older, and still don’t have an answer.

“I applied when I was 18 but I was lucky to get mine within a year,” she said. “Now with this new policy they have to go get a Haitian passport after waiting more than 10 to 15 years? That is not their fault, it’s the government’s fault for not following up on their documents.

“I did what was asked me of as a child born here to immigrant parents. I did everything, I have my receipts to prove that I did what the government asked as a law abiding citizen. Now five, six, 10 years later we now have to go get a Haitian passport and belongers permit? Overnight my application that i submitted when I was 18, that means nothing?”

In the last election, the Haitian community was told to cash in on its political currency. This term, it appears that this currency is being converted to serve another purpose. I wonder how much money, in terms of deportations and permit fees, it’s going to cost us to change that?

We are living in a society where a drive-by shooting at a local mall, or the brutal murder of a police officer, competes with allegations of abuse of pregnant women at the hands of Royal Bahamas Defence Force officers for the top bill of this daily newspaper. Meanwhile, our Ministry of Fun (Tourism) continues to spare no expense at fulfilling its mandate to drum up interest in our latest factory-made cultural product.

Watching the Bahamas All-Star Band march in the Macy’s Thanksgiving Day parade in snowy New York made the country shine warmly, if only for a moment lulled into the shallow mantra that all is “Better in the Bahamas”. We are in a state of desperation it seems - desperate for relief from the limbs we broke during our divorce from colonialism.

We want to regain function of these appendages that have healed badly but are unwilling to re-break an arm or leg so that it can be set right. As we follow our leaders into the new year and, as Mr Mitchell has declared, into Abaco, ask yourself this: are we any better for it? Any wiser?

Did we learn anything from the heart-wrenching accounts of families torn apart in the name of border protection and national security? Or, did the government just change. It can be argued that reports of our aggressive enforcement of immigration laws will deter future immigrants, but given that Mr Roker’s legacy is still ingrained as part of the average migrant’s testimony, it cannot be proven.

• What do you think? Email aturnquest@tribunemedia.net.

Ava it can not be all that bad as you say. Because they keep on coming by the boat loads. who comes to a place for all the bad treatment you described. Surely it must be better in the Bahamas. that is why they continue to come and build more and more shanty towns, They did make a mistake by inviting the press. something has to be done, the Bahamas has problems with medical care, hospitals,schools and the Country is in need of a new prison . The country can not contain the large amount of illegals that continue to come. What are you suggestions.?

Maybe then they will understand there is simply only so many square miles of space that this Bahamas has. God made the Bahamas a certain size. It ain't going to get any bigger just because some people choose not to use condoms.

We cannot take on the world's third world nations. We are just an island nation with limited to give. We are not big in size. It is not racism or prejudice, it is simply a fact. It's not about black, white, Asian or nation. We must be smart. The Haitians (and other folks) are fine people but there are just too many of them. It is not that they exist, it is the amount. We have to send illegal people back and stop giving out citizenships and work papers for people to compete for our jobs. We used to look to take in people who can create jobs, business people. Now we have takers, as if we are God and savior. They are using their children to hold us hostage, and many are falling for it. We need to send the parents back with their children and when the children, whom we care about, are old enough at a certain age, if they choose to be here instead of there, we will welcome them with open arms. Legally. We cannot encourage illegal immigration, we have to be strong and bold for the country sake. Now we have more countries flocking in here. Our lines used to be short, but now they are hours long. Our schools used to have more attention from a teacher, but now the classes are too full. We are small, but they are great, and our government is not bold enough to fix it. The Bahamas is not a heartless nation, but we cannot afford to be foolish. A soft heart will destroy you. A wise one will save you.