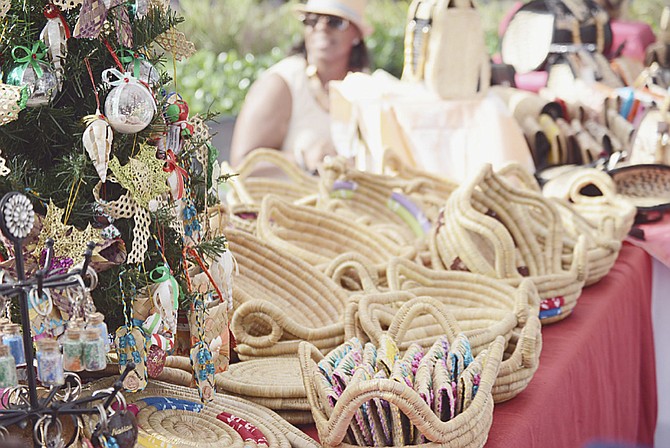 FOR three days last weekend local artisans took over Pompey Square as they displayed their crafts in the Authentically Bahamian Marketplace Christmas show.

The square was filled with booths offering gifts and treats; everything ranging from straw bags and hats to jewellery and wood carvings.

Marcella Dean of Origins Bahamas was one of many vendors displaying. Her semi precious and natural stone jewellery as well coconut shell pieces captured the attention of many patrons as the walked by her booth.

“Origins Bahamas has been operational for about 14 years now and it’s my hobby, so I just do it part-time. I enjoy what I do; I like wearing jewellery, so I just decided to make some money doing something that I love,” said Marcella.

Even though it was a bit windy and it rained intermittently, Marcella said sales were good throughout the day on Friday.

“There are a few Bahamians who came by and purchased, but the tourists, they like the native things and they like to know that it was made by a Bahamian. so I think that is the selling point for us,” said Marcella.

She has been taking part in this particular Christmas show for about six years now and Marcella said she enjoys it every year.

For the local buyers, Marcella said they seek Bahamian-made products as gifts during the Christmas season more than at any other time of the year. And while not many Bahamians purchased items last weekend, they did ask for business cards to seek out Origins at a later date, she said.

Since 2004, Celestine said she has been a part of this Christmas show and like Marcella, it has always been great experience for her.

Displaying jewellery made from sand, glass and Bahamian coins, vendor Elkin said his love for art began about five years ago in his mother’s souvenir shop in Freeport. Elkin said he would often make jewellery for her.

“We normally work Saturdays and Sundays out here in Pompey Square, but we would like to be out here more often. Today it is coming along very well, a lot of business from the tourists as well as Bahamians. This is very important for us to be able to get the opportunity to display our work,” he said.

Sonia Rolle, president of the Bahamas Association of Professional Artisans which hosts the event, said putting on the event is very costly, but it is important to the vendors because for a lot of them producing arts and crafts is their full-time job and they depend on the Christmas shoppers for revenue.

“A lot of tourists are looking for local products and they need to know where to find us, so I want to tell them to come down to the Authentically Bahamian Marketplace. We have such a variety of items. We were the vendors that were previously on Bay Street some time ago and we have since been moved from Bay Street to Pompey Square, and we are actually here every Saturday and Sunday displaying apart from the Christmas show,” said Sonia.

When asked about her personal thoughts on the Bahamian arts and crafts industry, Sonia said she would like to see it featured more in the country’s schools.

“If we can get the younger generation to understand who we are and where they come from then we can enhance ourselves and we can take our culture to another level,” Sonia said.

“Right now a lot of people don’t even know what silver top is or what coconut can be used for, and that is what we call money on the ground. Instead of just sitting down waiting on the government to just give you a hand-out you can look around for things you can do. like pick up shells to make a necklace, sell coconut water and use the shell itself to make jewellery. You can make bags, lamps and so many other things to use.”