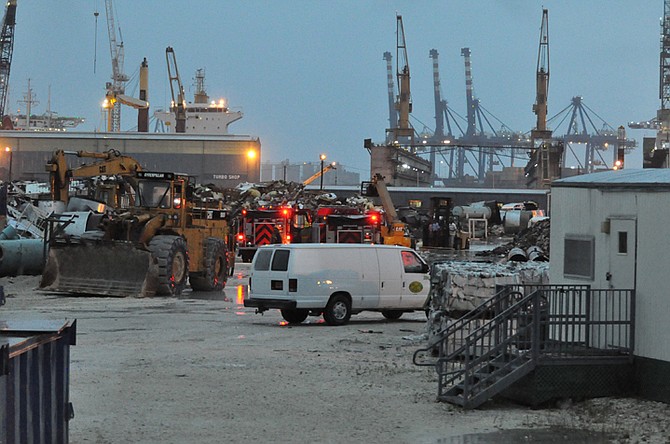 OFFICIALS have completed their analysis into the cockpit voice recorder and digital electronic engine monitors on board the plane that crashed in Grand Bahama over a month ago, killing prominent pastor Dr Myles Munroe and eight others.

The Tribune has learned that their results are in line with the conclusions of the preliminary report into the crash, which was released nearly three weeks ago.

That report revealed that the accident on November 9 took place while the pilots attempted to land the aircraft amid difficult weather conditions.

Department of Civil Aviation officers met officials of the Federal Aviation Administration (FAA) and Bombardier – the manufacturer of the aircraft – at the headquarters of the National Transportation Safety Board this week to process the investigation and formally analyse the relevant technology.

Having found results that support their initial conclusions, the team will now switch their focus to gaining insights into the lives of the plane’s pilots, Captain Stanley Thurston and First Officer Frahkan Cooper, during the pilots’ final few weeks.

They could begin interviewing family members of the pilot and co-pilot as early as next week.

According to a source close to the investigation who spoke to The Tribune on the condition of anonymity, while weather reduced visibility on the evening in question, the decisions the pilots made – or did not make – played a role in the crash.

Facing difficult weather conditions, the pilots could have turned the aircraft around and returned to New Providence, the source said.

Nonetheless, the source added a toxicology analysis of the pilots has been completed, revealing that they had consumed no drug that could have impaired their performance.

While Transport and Aviation Minister Glenys Hanna Martin has said that the investigation into the crash could take several months to complete, The Tribune’s source noted that the circumstances and facts surrounding the crash have now been established, adding that it is unlikely anything will emerge that would cause them to reverse their conclusions.

It is unclear when an official report into the investigation that takes into consideration the analysis of all relevant technology will be released.

They died immediately on impact after their plane hit a crane, rolled, inverted and crashed.

The plane had left Nassau shortly after 4pm and crashed around 5:10pm. The group was flying into Grand Bahama from New Providence for an annual leadership conference organised by Dr Munroe.

The weather at the time was reduced visibility, resulting in a missed landing on the aircraft’s second approach to the airport.

A preliminary report into the crash said: “The crew executed a missed approach procedure and continued outbound and entered the published holding pattern at 2,000 feet. Some time after entering the holding pattern, ATC (air traffic control) reported the weather as improving and thus a second ... approach was requested by the crew and granted by ATC.

“During the return for the second instrument approach, ATC reported the weather as again deteriorating due to rain and haze. While attempting to find the runway visually during the second approach, the aircraft descended and subsequently struck a towering crane at the Grand Bahama Shipyard.”

Were the pilots under duress to land the plane in Freeport thst caused them to override a professuonal decision to return to Nassau because of the deteriorating weather conditions?

Well...they are clearly eluding to the fact that it was strictly a pilot error situation, no red flags have been raised at all about any mechanical failures on the aircraft...at least not yet. Very sad situation.

Pilot error and ATC first saying weather had improved and then said weather deteriorating. It is hard to land an aircraft relying on ATC changing information.

"They could begin interviewing family members of the pilot and co-pilot as early as next week." "A toxicology analysis of the pilots has been completed, revealing that they had consumed no drug that 'could have' impaired their performance." Comrades two seemingly curious statements reportedly contained in most recent accident's crash report. What else other than the mental state of pilots could possibly come from family members?

While this is a tragedy for all involved, it's another example of subpar training and skills on the part of people that hold our lives in their hands here in Bahamas.....

Yes Comrade a deadly tragedy 9 lives and their loved ones. Talking family members would have nothing to do with a pilots training. The mental and financial state of the two pilots are the only two reasons talk family members.

Was the Lear jet registered in the Bahamas or U.S.? Was the aircraft's Airworthiness Certificate current? Was each pilot holding an unexpired pilot's license? Was each pilot holding a current Medical/Health Certificate? Was each pilot holding a current Instrument Rating for the Lear jet they were flying? All of this info should be a matter of public record, but it seems The Tribune reporters are content to simply report what's said by others rather than do the more costly investigative work. The Editor of The Tribune has been asleep for far too long and it has seriously impacted the quality of The Tribune's reporting. The old lady who claims to be the Editor has been an extinct dinosaur for years now; her inability to completely turn the newspaper over to fresh new blood will soon result in its demise under crushing competition from other dailies. Wakey, wakey!!!

That came out in the preliminary report...US registered to a US based company, each pilot was current, with current medicals and type rated for the Lear...so all that checks out.

Investigators for insurers should independently verify all assertions made in the preliminary report relating to competency and health of the pilots.

Many factors would have resulted to this crash, but drugs or alcohol check? Well, maybe its routine, but I don't think so, fatigue perhaps, but I believe the problem to be a desperate position based on insufficient fuel.

Lets go on the information released (by the media) such as, aircraft type, fuel and weather conditions assuming that the fog or clouds were some 300 or 400 feet from the ground. If the airport aircraft landing systems were out of service, and if the trip fuel was 160 gallons (16% fuel tank capacity) from the gate then approach and landing would have to be VOR (visual).

If this was the case, then the flight from NAS - FPO and one go around would have burn some 55% to 60% of the fuel. The remaining fuel on board would be some 40% of the fuel and would be insufficient to safely reach an alternate airport such as Nassau, Bimini or Fort Lauderdale. Returning to Nassau would have been on a wing and a prayer, but I don't see how it was possible to safely reach Nassau as an alternate airport.

If the numbers (informations) is correct you can do this calculation and test with a Flight Navigator and Microsoft Flight Simulator (it might not be exact but pretty close, much closer than feelings and speculations).

I am not trying to create assumption, but what happened is baffling. If the pilots flying this plane were not in charge and there were faith-base or back seat drivers, then the pilot could not make the decision as to what to do. This does not excuse the fact that this accident is a result of pilot error. Globally industry flight rules are simple and rules, regulations and routine safe guards do not change base on where you are. If the weather conditions were clear a visual approach would have been a routine landing. It was not.

Knowing the weather condition before leaving Nassau, the safety measure is to fuel the aircraft with as much fuel as possible to landing, at lease 20% of the fuel tank capacity. Why was it not done? This simple safe guard would have removed the desperate attempts to land instead of flying to an alternate airport. This was a flight of no return, based on the information reaching an alternate airport was a non-option.

Comrade you are totally discounting whether the 160 gallons were in addition to exiting fuel on-aboard?

It makes absolute no sense for the reporter to report fuel loaded to the aircraft without reporting the total amount of FOB (fuel on board) at the gate? Total FOB is released by the same person or company that loaded the fuel. So to ask and report fuel loaded instead of FOB would would be very poor and awkward journalism.

Agreed...but as stated...that is what happened...all we know is that before he departed, the fuel truck sold him another 160 gallons of fuel. No mention as to what he had on there to start with...agreed, very poor info and could be very misleading taken out of context.

You seem to be assuming that ONLY 160 gallons were on board. Where are you getting your info? How do you know what amount of fuel was in the tanks before the filling?

Weather conditions at the time of the crash . What do you think?