18-year-old victim was out on bail for serious offence 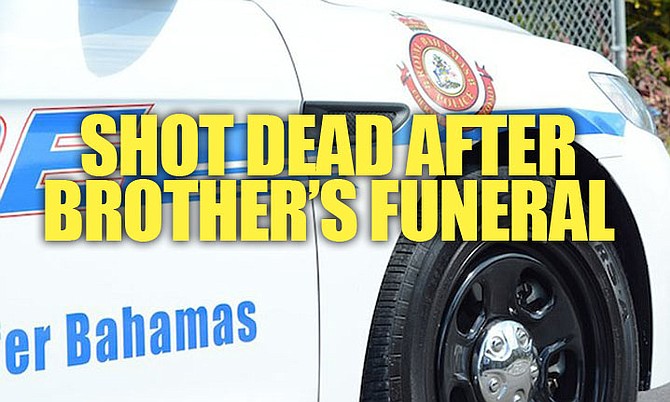 AN 18-year-old youth on bail was killed Saturday after attending the funeral of his brother who was murdered two weeks ago.

The slain teen was wearing an ankle bracelet and police confirmed he was just released on bail “for a serious indictable offence.”

Police Assistant Commissioner Anthony Ferguson declined to identify the victim but confirmed to The Tribune yesterday that he was the brother of one of two men shot and killed two weeks ago in the vicinity of Nicholls Street. -

Byron Saunders, aka “Bones”, and Jermaine Rolle, Jr, were killed on November 28 in separate incidents just minutes apart in the Yellow Elder Gardens area. It is suspected that they were killed by the same gunmen.

At the time, Rolle’s family members claimed that his murder was connected to his father’s killing in 2010. Meanwhile Saunders’ mother, Karen Joffre, said she had another son who was killed nine years ago.

According to police, after leaving his brother’s funeral, the country’s latest murder victim was travelling with his 14-year-old brother around 1:30pm when they stopped at a traffic light on Soldier Road near Robinson Road.

Then two masked men, armed with handguns, jumped out of a gold coloured vehicle and shot at them multiple times before speeding off.

The 14-year-old was hit several times and at last report was in hospital in critical condition.

The victim was pronounced dead when he arrived at the hospital.

His death brought the country’s murder rate for the year to 116, three shy of last year’s tally.

Speaking to reporters after Saturday’s shooting, Assistant Commissioner Stephen Dean said police are challenged with persons on bail either committing crimes or becoming victims themselves.

“This is the challenge police are faced with,” he said. “We do our part every day to get these people before the courts. We are doing it. Do we have to find a way as a country, all the systems of justice have to work together to make sure we keep these persons locked behind bars because as long as they are on the streets they are not going to work, they are going to continue with the life of crime and will continue to use the firearms, they will continue to become a menace to society.

“We need now the entire country, everybody, we are at a crossroads right now and if the issue of people being released on bail in a short period of time, that is something we have to look at. We know what the problem is in this country and we have to solve it.”

You see, the Privy Council cannot stop the death penalty from being imposed in the Bahamas. The general public is imposing it in lieu of Government action.

The word of God says, "you live by the sword, you will die by the sword".That statement is as powerful as when God said, "Let there be light". The Privy Council or the best defense lawyer can't change that.

Welcome to the Bahamas where law enforcement officials are now telling grieving families and the public in general, essentially that their loved one deserved to die because he "was wearing an ankle bracelet and had committed a seriously indictable offence." Never mind that his younger 14 year old brother was also shot execution style and is now fighting for his life. Never mind that the execution took place at one of the most sacred events that is hrld in the Bahamas. Don't let it bother you that the murder and attempted murder took place in the broad of daylight and on one of the most busiest highways in the city when the island was full of family visiting from the islands for another event that Bahamians hold close to their hearts. The fact is that the murdered one was a criminal wearing an ankle bracelet and involved in gang activities. Speaking of gangsterism, the commissioner ststed thst a number of murders are a result of gang warfare and the sale of illegal drugs. Despite laws being recently passed, how many persons have been charged with being a gang leader or even gang activity for that matter? Right at this moment Sandilands Rehabilition Center, on the male side, is filled to capacity with young men being treated for drug and substance abuse. The drugs on the streets today are stronger and more powerful than ever before and the victims of drug abuse are young men, some of whom are 9 and 10 graders. What measures are being put in place to deal with these drug dealers who are causing our young men to lose their minds?

If many of the murders in this country are a result of the illegal drug trade and gang banging, then the most logical thing to do is to crack down on drug pushers and gang leaders. You kill a snake by attacking its head and the rest of its body will die with it.

You will know they are serious about stopping these murders when you see at least FIFTY persons brought to trial in the same year and the majority of them are convicted and given a life sentence in jail. Then how about a LIFO (last in first out) approach to scheduling murder cases, at least trmporarily until the situation is brought under control. So as soon as a murder case is ready, it goes to trial. With the evidence being fresh and witnisses being more availsble the chances of conviction will be grester. Once more persons are convicted of murder and given harsh prison time the carnage will stop. But as it stands now it appears that there is no punishment for murder except if and when the murdered is himself killed.

It's simple someone big is making money off the killings. That is why they persist. Someone with money power and influence. They have tentacles among police, judiciary and government ministers. When corruption is weeded out, when a minister who steals from Ministry of Housing is publicly denounced, the murders will stop. I suspect everyone would be shocked at the identity of the real drug barons in this country. The faces we see and the names that we hear about no doubt belong to the foot soldiers