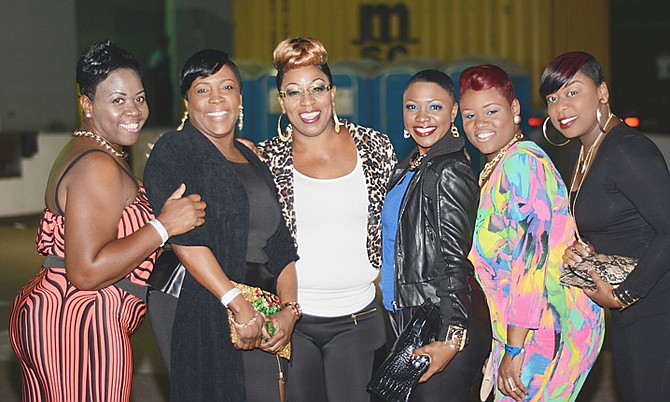 MUH BEY Dem Productions had a sweet holiday treat up their sleeves for party-goers last Saturday at the Bristol Wine & Spirits Grounds when they presented the “Bahamian Ting” live concert.

The concert featured Bahamian favourites such as Ira Storr and the Spank Band, Geno-D, K B, Veronica Bishop and D MAC, all hosted by Da Natural Empress and Da Mighty Pencil.

The production group said it is determined to make a difference and create avenues for Bahamian music to reach the public. Terrence Arnett of Muh Bey Dem Productions said he has always used the company’s logo to promote music, but this was the very first time the team has hosted an event under their company’s umbrella.

“I thought about things I heard addressed on local talk shows; Bahamians not getting enough Bahamian concerts and events. There are always more foreign artists coming over. I spoke with a friend of mine, Bahamian singer Ira Storr, and we both said let’s just try it,” said Mr Arnett.

Together with Ira Storr he started planning for the event in May of this year, jotting down ideas for the type of concert that would attract the clientele they want.

“The overall goal is to give Bahamian artists a big stage to perform their work. This is the first concert for Muh Bey Dem, but we are trying to see if we can make it an annual event. We want to invite all genres, but for starters we just want to kick off with the soca and rake n scrape side of it. In the future we are looking to have a stage for all artists and hopefully we can one day take this international,” said Mr Arnett.

Describing the performers as some of the country’s best, Mr Arnett said they all made the event a fun and entertaining one.

He said the Bahamas has enough talent to make this concert go on to the international level. “The way in which Bahamian singers tell a story with their songs is amazing,” he said.

“Whether it is rake n scrape or R&B, once it is a Bahamian artist we really have to support them and listen to their words that tell these stories. It is important to push Bahamian artists because with so much negativity going on today, with groups like us pushing the artists, it shows a more positive light to the younger generation for what they could be doing,” said Mr Arnett.

Moving forward, the team behind Muh Buy Dem is now going back to the drawing board with plans to take the concert to the Family Islands at least once a year.

“We have gotten good support and would like to thank the Bahamian public for showing their support,” said Mr Arnett.

He also emphasised that Muh Buy Dem enjoys giving back to various local charities, and part proceeds from the recent concert are going towards the GDM Band, the Sister Sister Breast Cancer Support Group and the Children’s Emergency Hostel.

“The GDM Band was started out with a friend of mine and my brother teaching them music skills for free. They are based out of Malcolm Road and they are growing in the community. Whether they are doing it for fun or professionally, they need to know that they have a local stage and they are receptive to the local audiences,” said Mr Arnett.

With his wife, Marina Arnett, being a breast cancer survivor, Mr Arnett said he has always wanted to support cancer initiatives and the search for a cure, which is the reason he wants to give back to breast cancer related charities as well.