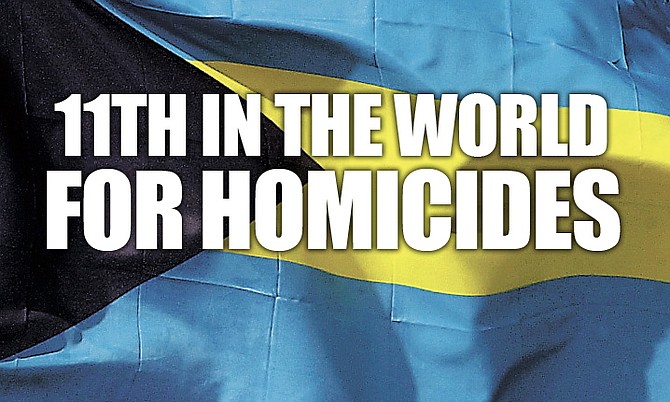 THE Bahamas qualified as an “armed conflict zone” with high rates of gun violence according to findings from the United Nations’ and the World Health Organization’s 2014 Global Status Report on Violence Prevention.

The findings placed the country at number 11 out of 20 of the most homicidal countries in the world.

A report published by Business Insider, based on the findings, said instances of robbery, rape and homicide are common throughout the Bahamas.

According to the Global Status Report on Violence Prevention, there were on average 32.1 murders in the Bahamas per 100,000 inhabitants in 2012 with 75 per cent of homicides caused by firearms.

The Business Insider report added that “this tropical paradise technically qualifies as an armed conflict zone,” according to the WHO.

“Between 2006 and 2011,” the report said, “crime in the Bahamas rose by 49 per cent, The Tribune reported last year. Armed robbery, rape, and homicide are common in the Bahamas. The causes of violent crime range from gang warfare to trivial disputes. Experts at the College of the Bahamas have speculated that the exposure of Bahamian children to violence at home may contribute to their violent behaviour later on.”

When contacted for comment, State National Security Minister Keith Bell said the conclusions drawn from the report were “obviously fundamentally flawed.” He further suggested that the report exaggerated the real crime situation in the country.

He said: “In fairness to our country I would say that those conclusions are obviously fundamentally flawed.

“It is obvious that they are using a very wide brush in their interpretation of ‘armed conflict zones’. My point is that if they say we qualify based on the World Health Organisation’s definition for such zones, then all those developed, developing and under-developed countries around us must be classified as terrorist zones.”

Worldwide in 2012, the report said, there were 475,000 murder victims, 60 per cent of whom were males between 15 and 44 years old. Half of all homicide victims are killed by a firearm, and Latin America is the world’s most murderous region.

Honduras was considered the most homicidal country with 103.9 murders per 100,000 people, according to the report, and 84 per cent of the victims are killed by firearms.

Venezuela, which came second on the list, recorded 90 per cent of killings by firearms, while the report said 70 per cent of the homicides in Jamaica, which was ranked number three on the list, were due to gun violence.

The report came one day after National Security Minister Dr Bernard Nottage skirted around questions regarding the government’s failure to control the scourge of crime in the country as it had heavily campaigned to do during the 2012 general election.

More than two years since taking office, Dr Nottage told Parliamentarians on Wednesday that the crime situation was the result of a flawed judicial system.

He said the government would direct its focus on tackling those challenges with the system in order to bring crime to a reasonable level.

The country’s murder count for the year, up to press time according to The Tribune’s records, was 116. Police recorded 119 murders in 2013.

The UN and WHO’s report is similar to a study done by the Inter-American Development Bank that was released just one year ago. At that time, the Bahamas was considered as almost qualifying as an armed conflict zone.

That report, which measured homicides per 100,000 inhabitants, said the murder rate over the last several years was about three times a level that constitutes an epidemic, roughly equivalent to a conflict zone, and continues to be one of the highest in the region.

The statistics were included in the Inter-American Development Bank Country Strategy for the Bahamas. It revealed that in 2010, this country had the highest prisoner to population ratio in the region and one of the highest in the world – with nearly 70 per cent of prisoners still awaiting trial.

who cares right Mr. Bell? I wonder what is "fundamentally flawed" about 120 homicides. The people that are losing the battle against crime are called "losers" - worse they get paid for losing.

Is there any wonder why crime is so high with asinine comments made by the likes of the Minister for State for National Security??? Face it people -- this country is a conflict zone and we are only better than Haiti. Wake up!!! The PLP wants to continue this chaotic state so that the lawyers sitting in the HOA can continue to make money. Plus the population will be so focused on the violence that the Members of the HOA can do as they please and continue to raid the cookie jar!!! If they wanted to fix the problem, they would do everything in their power to solve it.

We must feel SO PROUD!! Well done Bahamas...and Mr. Bell get your head out of your A$$!!

He need to get his head out of BJ ass

Bell is comfortable where he is....He doesn't have the balls to oppose ANYTHING and is incapable of independent thought.

Bell couldn't get out of his own way. How the hell could he be expected to pull his swollen head out of his A$$?

Please do not insult morons by acquainting them with a 360 degree A$$hole like Bell.

Good God how many tourist destinations can boast of ranking #11 in the world being murdered? None other than Bahamaland. Where Justice ain't so swift and efficient and where the PM, Minister Security, Police Commish, Her Majesty's Opposition Leader, Minister Bell and "Hung and Whip Um" Bran are best known blowing fantasy solutions out da cracks they arses. Can you imagine if they started ranking our Bahamaland by under-age prostitution, drugs, rapes, thieving, home invasions, shooting you at funerals, being knifed or car jacked. What in hell will be left of our tourism industry in 10 years for Cuba Libre to even be bothered with out competing your once upon a time main competition?

Let's not forgot the other report that out of all Caribbean destinations, the Bahamas has just recorded it's biggest loss in market share of tourists!! Doing wonderful!! Then you have Mitchell saying that tourism won't be impacted by Cuba...more heads up more a$$e$

Crime not Cuba Libre will bankrupt country. Our leaders, past and present, are to be to made ashamed of how poorly they have management the peoples business. What nerve they have to even pretend that suddenly they have new-found skills that can lead to solutions. Comrades If it's not all lies, it's still desperation that will and cannot possibly generate positive results.

[bill maher used to display a snow globe with american polititicians sputing off aloof comments on the show, these pronouncments were called 'postcards from the bubble]

Regardless 5 years, 3 months ago

This country has been run by egotistical amateurs for the last 40 years. This is the manifestation of their deeds as leaders of a paradise.

The crime situation is under-exaggerated. I would love to see that stats on how many attempted murders we have had in the last five years. I consider attempted murder as anyone who has been shot or shot at or stabbed and who has survived. This number must be in the hundreds each year as well.

This is why soo many young Bahamians either not return home or leave again once returning. Those of us with new ideas to help solve the problems are kept out of the system all because the clueless leaders (government and non government) are soo afraid of losing power!

You never know - next year we could be at #9, with a bullet

Oh Comrade Mama if you would have told me the Guardian’s “Kreyol Connection with Louby Georges” could possibly out do having “Boycott Bahamas” Daphne Campbell on as a guest on their Wednesday night show, I be laughing. But how wrong I was doubting you Mama. On tonight’s show, now airing live online Comrade Talkie Host Louby is inviting his listeners to call-in to his now to vote, if an election were held now, would they vote PLP FNM or DNA? Sounds okay. But wait, there’s more. Louby says, "it doesn’t matter if you are a legal or illegal in da Haitian community" - call him to vote. Surprisingly, DNA is running neck –in neck FNM. PLP trails badly at only 1 vote. For those who missed Wednesday’s interview with “Boycott Bahamas” Daphne Campbell here’s your chance. Warning best you take minimum 6 your extra strength, doctor prescribed high blood pressure medication.

Both the FNM and PLP should be charged with the murder of a NATION! We are dying as a country.

Of course that dumb waffling shuffling arrogant incompetent "can't get it up" idiot Christie sees no need for him to respond in any way to the noose the rest of the world is tightening around the neck of our squawking tourism goose that can no longer lay any golden eggs. Baha Mar, Atlantis, etc. will all be doomed if they don't soon pool their resources behind their one true common interest which should be the imminent demise of the political careers of Christie and all of the current members of parliament whether they be MP's or Senators and whether they be PLP or FNM. Successive FNM and PLP governments have demonstrated time and time again their: (1) inability to significantly reduce the current level of crime; (2) unwillingness to improve the educational system; (3) unwillingness to create a level playing field and atmosphere conducive to the formation of profitable small and medium size business enterprises (thereby generating new jobs); (4) inability and unwillingness to stamp out government sponsored corruption and crony capitalism; and (5) inability to manage the country's finances. In fact, when it comes to reducing crime, we instead see the Christie led PLP being only too eager to legalize the corrupt racketeering activities of the local gambling web shops. For many years now our law enforcement agencies under both the PLP and FNM governments have allowed well known criminals (the numbers' bosses) like Craig Flowers to run their criminal enterprises out in the open in exchange for political gifts, bribes and pay-offs of one kind or another. Christie, Davis, Maynard-Gibson and Wilchcombe have allowed such criminal elements to eat away at the social fabric and well being of our society to the point where only dumb tourists with very limited financial means show any interest in visiting our shores. Atlantis, Baha Mar and others had better soon wake up or they will soon find the rug has been pulled out from under them in the same way it has been done for our country's financial services sector which has now been just about decimated.

Researching in Rome is fun and additionally enjoyable for types of individuals, young or possibly old, budget allowed or basically no budget. Vacation is imperative. Here really are some helpful hints to help you out on any travels for shops to inspect for beautiful items, garmets, & necklaces. http://www.firenzeshopping.org/">www.firenzeshopping.org