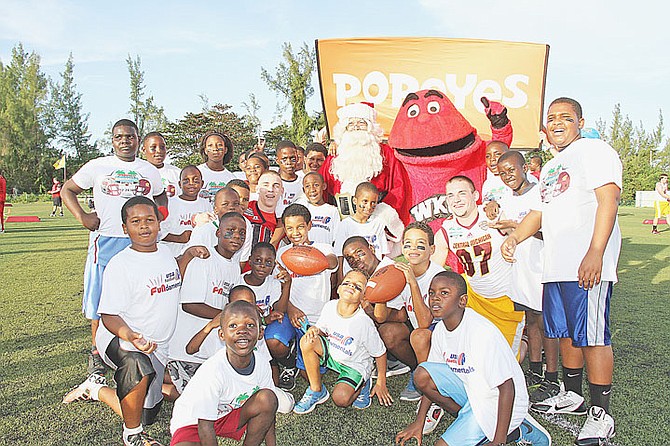 Bowl week events continued yesterday for the inaugural Popeyes Bahamas Bowl as the organisers sought to foster a relationship with the local community and “promote educational and athletic opportunities to the youth of the Bahamas through college football.”

First up, the contingent teamed with Santa Claus as they visited the Ranfurly Homes for Children in an effort to spread holiday cheer. They then hosted a Youth Football Leadership Clinic, in conjunction with USA Football, at the Roscow Davies Soccer Field.

Alexander Roberts, administrator at the Ranfurly Home, said it was a fitting gesture for the kids at the home to interact with the collegiate stars they will see on the field.

“It’s quite an honour for us at the Ranfurly Home, particularly at this time of year to be able to host the players, coaches and staff from the schools,” he said. “We thank the organisers who have worked hard for a year to make this event happen.”

At the Youth Football Leadership Clinic, dozens of students from kindergarten to high school players took part in various drills by the USA Football staff players.

Chris Maddox, USA Football representative and clinic coordinator, said similar clinics could be integral in bringing some of the country’s many talented athletes to American football.

“It was fun watching the kids run around and have a great time, they are getting to interact with and even tackle these guys and they had a blast doing it,” he said. “There are a lot of good athletes here that play other sports, they’re just now learning to play American football. It can crossover and as the popularity of the sport develops your better athletes will gravitate towards it. These kids watch the Super Bowl but they don’t get to go out and play with their buddies afterward. This provides a connection and all helps the sport to grow.”

Camp participant Daniel Bullard said the event was a learning experience. “We were able to learn a lot from the players, the basic things like catching, throwing, running with the ball and how to tackle,” he said, it was a lot of fun.”

Western Kentucky kicker Michael Bryar said his second visit to the Bahamas will be one that he will always remember with the bowl game and interaction with the kids.

“It was so much fun being out here with the team we are competing against, but being out here for the kids, it was so much fun, we loved it,” he said. “They were actually doing a really great job. We didn’t expect much, some of them have never seen a football, some of them did not know what the sport is but it was fun just to be able to introduce it to the kids and have a great time.”

The matchup between the Western Kentucky Hilltoppers and Central Michigan Chippewas is scheduled for noon December 24 broadcasted live on ESPN and ESPN Radio. However, bowl week will feature a list of supporting events.

Britton Banowsky, president of the Bahamas Bowl and commissioner of Conference-USA, said it was important for his committee to establish its roots in the Bahamas, as the game will be featured here for the next five years.

“We have had a lot of support from the community and so we saw it was fitting to give back. It is important in all our events to have a sense of community, to have the people engage with the event and a symbiotic relationship occurs. The participants in the event get a great experience and those in the community get a great experience. Here, it’s even more important I think because of the newness to it and a greater opportunity to do that. So we hope over the course of 4-5 years as we build this that we are able to grow roots deeper and deeper into the community,” he said.

“It is a great experience for the coaches and their players. It’s a once in a lifetime experience and it’s a great opportunity to introduce to the youth of the Bahamas the quality of the folks on these teams and try to create a college going culture in the Bahamas through the sport of of football. We know that there are folks here who love football and it creating a more enriching experience around the sport of football is absolutely something we want to do.”

A halftime show featuring the Valley Boys, a pre-game show featuring the Bahamas All-Star Band and free samples of a new flavour from Popeyes chicken to the first 5,000 patrons in the Thomas A Robinson stadium will accent the battle on the gridiron between the two college teams.