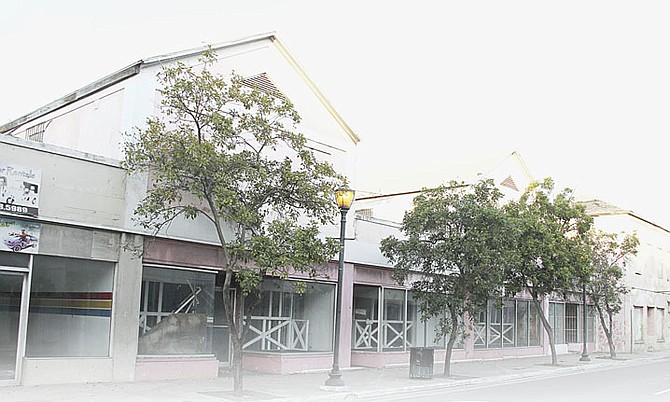 An ambitious and much-needed project to regenerate Bay Street, Nassau is again in the offing. Richard Coulson looks at what needs to be done differently to prevent it suffering the same fate as the ten-year old EDAW plan, which withered on the vine.

Here we are at the end of 2014, and despite uncountable articles, editorials, architects’ plans and their fervent cries for change, criticism from cruise operators and our own Ministry of Tourism, Bay Street does not look much better than it did ten years ago, under the aegis of two Prime Ministers since then.

The eastern section is even more depressed, as commercial shipping departed for Arawak Cay and nothing replaced it. The late Jackson Burnside’s proposal was widely admired but got no traction.

Yes, there have been a few tweaks, like the new Straw Market, the Pompey Museum and commercial up-grades like the handsome Bacardi Store on the corner of East and Bay. Just west of central downtown, a uniquely impressive complex has been created by the once-illegal Craig Flowers, owner of web-shop operator FML Industries, now sanitised by recent legislation, who has done more for the scene than any of our older “establishment” companies.

But we still have no parking garages, pedestrian streets, tree-shaded plazas for outdoor restaurants; nor, above all, any residential housing that would bring people to populate the night-time silence and darkness. I recently found on the Internet the grandiose “Nassau Harbour - Bay Street Regeneration” the 2004 master plan that included all the above features and many more.

Atlanta architecture and site design firm EDAW hired 19 qualified interns directed by EDAW executives, who prepared the detailed diagrams, photographs and artists’ renderings that created a glorious concept of “One Vision, Three Districts”. I recall seeing the many slick films and power-point presentations to Bahamian groups and wandering through several halls at the Hilton displaying alternative schemes for local comment. EDAW had done a thorough job, in return for an alleged $1m fee from Government.

One can still read Perry Christie’s effulgent statement: “It is my hope that as we take the first steps in the transformation of Bay Street that every one - both stakeholders and the public - will work to ensure quick success.” Of course, no first steps were ever taken and, after all the publicity died down and the trial displays were removed, the project died a natural death. The fatal flaw was, like many improvement schemes over the years, it was simply a lovely plan, with no thought about who would execute it - or pay for it.

Certainly Government was not going to lay out hundreds of millions. EDAW were strictly consultants, not investors, and our private owners had neither the funds nor the co-operative expertise for zone-wide development.

Now, ten years later, another downtown renaissance project is just beginning to gel. Last week I spoke with Todd Hill, a principal of the 2004 EDAW team, who was back in Nassau representing a different American firm, DTJ Design. He had been invited by a joint venture of Government and the private-sector, Downtown Nassau Partnership (DNP), to re-study the EDAW plan and adapt it to present conditions, working with Bahamian architect Michael Foster.

He went on to plenary sessions with the Prime Minister, his deputy and prominent Bay Street property owners where, I am told, there was plenty of goodwill and hopeful sentiments, but a distinct lack of specific decisions that have been hanging fire for at least a year - no decision on lifting the Bay Street height restriction to ten or 12 storeys, without which the several bidders for the key three-acre Union Wharf property will not move ahead; no time-line or funding commitments for the long-awaited boardwalk stretching from Rawson Square to the Paradise Island bridge.

This essential feature, promised by the PM, will be built by the Chinese State Construction Company as soon as they finish with Baha Mar. The Chinese presence may be the one key feature that will save the present effort from the fate of the 2004 failure. For the first time, we have a player in the game who has the two elements - major-league money and management - essential for any real success. The Chinese have already the British Colonial Hotel and sent an executive to the meeting to explain plans for the adjacent area. More significant, three months ago the Chinese presented to Government a plan for revitalising the whole downtown zone, which is being “studied”.

The trouble is, nobody seems to know what this plan encompasses, or is willing or able to release any details, and the whole concept seems mired in controversy and uncertainty. Minister of Tourism, Obie Wilchcombe, downplayed it, warning that the Chinese will not be given a free hand to dictate control of our fair city: “we” will do it, he said. The DNP private owners, who have been presenting plans to Government for several years, are miffed that suddenly the Chinese goliath may be given preference with their own master plan.

The hard truth is that regeneration of Nassau cannot proceed without a dominant planner/investor. It was hoped that a private party like the US-funded Dart Group that built virtually a new town in Grand Cayman might step forward, or someone like the Rouse Company that revived the Baltimore waterfront, but the Chinese became the only candidate. Consider the massive zone that must be restored - it’s the swath of vacant or underutilised structures running east from East Street that presently is a dead zone for both tourism and local business.

The harbourfront premises on the north of Bay Street may be developed by their present owners, who include established names like Kelly, Pritchard, Mosko, Klonaris, Bethell and Symonette, and by ambitious new owners of Union Wharf. But will these independent parties ever agree on an integrated plan? Furthermore, any true renovation cannot ignore the south side of Bay Street, where commerce is virtually dead in a series of derelict or marginal buildings like the Corona Hotel, a dark hole closed for years, creating a blight on the best part of a city block. Owners of these properties do not have the capital for major restoration, and probably are in default on real property taxes.

Who is going to take responsibility for these zombie properties, by acquiring title and then either demolishing or major re-building? Other owners will have their own projects to finance, so it can only be a major newcomer like the Chinese, using their own money and organising equity joint ventures and credit-worthy borrowing structures to tap our pension funds for long-term loans.

All of this will take long and complex arrangements fitting many parties together into a financial jigsaw puzzle, with reams of documentation and late-night negotiating sessions. But let us be optimistic and assume this can be done, as has been the case with innumerable cities around the world facing seemingly insuperable obstacles. Certainly DTJ Design and Bahamian architects can produce an attractive and viable development plan. The essential steps then will to learn what exactly the Chinese are prepared to commit, and for Government to abandon its endless procrastination and publish new and sensible regulations and guidelines.

Within five years, we could be well along the path that transformed Florida’s Delray Beach from an unsightly checkerboard of streets displaying tacky stores and clapped-out housing to its present level of charm and low-keyed affluence, attracting both tourists and local residents with an array of boutique stores, galleries and up-scale condos and town houses. Delray’s problems were no less than ours, but a unified community will for change resulted in success. The same could happen here.

• Richard Coulson is a retired lawyer and investment banker resident in the Bahamas. He is a financial consultant and author of A Corkscrew Life - adventures of a travelling financier.

why would any investor in their right mind decide to purposely 1) deal with the corrupt Bahamian government for approval of any such plans, 2) deal with corrupt contractors (by necessity due to bahamian law), 3) pay outrageous duties/VAT/shipping costs etc for supplies to build in uptown, 4) have continued ongoing costs overruns due to electrical, maintenance, etc? 5) Have unstable police protection for those working/living in an uptown setting? 6) Throw good money into an economy that is a train wreck with no end in sight? No thank you! I'll take my monies to DR, Cuba, Haiti, Turks Caicos, PR......