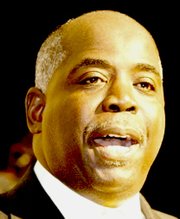 DEPUTY Prime Minister Philip “Brave” Davis said yesterday that he does not know if the government will establish a non-partisan commission to investigate a report that an official took a $300,000 bribe in 2000 to secure the purchase of a diesel generator for French energy company Alstom.

Mr Farrington expressed outrage over the bribery revelations and called for the “traitor in our midst” to be “revealed and made to pay a price for this unforgivable transgression.”

Speaking to The Tribune outside Cabinet yesterday, Mr Davis said: “It’s good to see that he is prepared to let the chips fall where they may and so they will. I don’t know whether we will set up a committee. The matter is in the hands of the attorney general and she will advise us what is the best approach to take.”

Mr Davis said he could not say when the public could expect to be updated on the matter.

Long Island MP Loretta Butler-Turner, who was a BEC board member at the time of the reported bribery, endorsed Mr Farrington’s statements when contacted for comment by this newspaper yesterday.

“I know (Mr Farrington) to be a very astute, very upright chairman and certainly everything that he has said I will endorse,” she said. “It was truly a pleasure for me to serve under such a man. I have no reason to question his effectiveness or integrity with regard to his tenure and I certainly will take his lead on what he has said.”

The bribery claims were unearthed in a $720m plea agreement between Alstom and the US Justice Department. The plea agreement makes it clear that a Bahamian government official, in cooperation with a consultant identified as a US resident, used bribes to “obtain or retain business in connection with the power project.”

The claims said that the French company paid more than $300,000 to the government official to secure the purchase of a slow diesel generator for the electricity company in 2000, when the Free National Movement was in control of the government.

Last week, Alstom pleaded guilty and agreed to pay a $772,290,000 fine to resolve charges related to a widespread scheme involving tens of millions of dollars in bribes in countries around the world, including Indonesia, Saudia Arabia, Egypt, and the Bahamas.

Documents obtained by The Tribune reveal that the French company hid payments to Bahamian officials, routing them through an American consultant who was a “close personal friend” of one person able to “influence” the awarding of BEC contracts.

None of those involved in the scheme is named in court documents.

$300,000 is a drop in the ocean compared to what has been plundered since. It would be pointless investigating one incident without looking at the bigger picture. Of course, this won't happen because the political elite has the country stitched up.

I am sorry DPM but this is not for you to decide, if you will appoint a committee. In fact you have no authority to speak to this allegation. DPM this is above your pay scale. This is by way of sworn testimony before a US Court of Justice outlining a serious money acceptance allegation of corruption against a former government official(s). Did the accuser get their facts correct or not is something every individual in charge of BEC at the time must freely and voluntarily step forward to clear their good reputations. Regardless, whether or not these allegations are protected by a statute of limitation in law which forbids prosecutors from charging as a crime of corruption, there can never be a protection from being shamed by former colleagues and the public-at-large. Former BEC connected individuals serving on the public treasury's dimes at the time must fully cooperate with the offices of the Attorney General and answer responsible media questions. Cabinet minutes should be made public for Bahamalander's and the international community to better understand "how the Ingraham cabinet decided to overrule the decision of the BEC board members decision not to award the generators contract?" A no comment is not going to be acceptable. Who was it that championed the reversal of the BEC "NO VOTES" before cabinet? And, why so? Comrades there may be simple and satisfactory answers but in the meantime - make the damn cabinet minutes public.

No probe can ever happen into corruption because corruption is systemic throughout the country and any "investigation" will expose a few persons which will have a domino effect on corruption everywhere else.

The same is true with the $5M that disappeared from the peoples Treasury into a former FNM Minister Of Tourism shell company under the FNM, that both PLP and FNM agreed to sweep under the table, because if one Minister goes to jail for corruption several more will have to follow!

The Bahamas is the only country in the world I know of where no politician has ever been charged with corruption. Everybody are either 100% honest here or we are being fleeced by a whole crew of pirates that systematically protect each other.

Birds of a feather "tief" together.

Comrades upon further reflection some red shirts photos does reminds me of how I picture countries run by dictators being Jeeped around.

The media is crooked in this. The indictment says that Official 8 (a Board member) was appointed by J Barrie Farrington to oversee the tender process for the generator contract. So, in all that talking that Farrington did, why didn't the media ask him who was the person he appointed, since the indictment says that the appointee is Official 8? The media can also just go and get the Board meeting minutes to find that out. And secondly, why hasn't the media asked Frank Watson WHY the Cabinet overruled the decision of the Board in this matter? That Cabinet decision is key, but continues to be sidestepped.

The Freedom of Information Act is needed desperately.

The only way the Bahamas will get the FOIA is for them to vote in a new party that didn't had their hands dirty and still that might not be enough because if that party wants to get their hands dirty they wouldn't even entertain such an act.

Comrade Lucaya we have MP's, former and present as political party you belong to matters not, who done be in breach of the law already on the books, requiring them to file their respective MP's Financial Disclosure Statements. Regardless, even the passage of FOI legislation will still permit the governing party to delete (cover-up) anything that could expose themselves to be self-incriminating. Let's begin with releasing all respective BEC related cabinet minutes and then work our way backwards to the BEC Minister and Board of Directors. Only a complete political jackass could claim this would harm the nation's national security.

This government should not be sidetracked and forgo a once in a life time opportunity to fix BEC rid it off its multi-million debt, outfit it with new generating plant, while at the same time reducing the average consumer bill by at least 50%. Oil prices are expected 5o continue to fall in 2015 due to numerous factors and may fall to below $30 if persons who are heavily vested in the oil market starts to panic and bail out. The first thing BEC should do is pay off its debt while simutaneously reducing consumer bills. Then it can put a new modern and efficient plant that runs of more efficient fuels. Even renewable ones. There is a window of opportunity that should be missed. If BEC is turned over to a private foreign operator at this time they may take advantage of profiteering and still not fix BEC so that the consumer benefits.

J. Barrie Farrington's outrage over the recently disclosed bribery incident should have been exceeded by his outrage many years ago when the decision of the BEC Board that he chaired was over ridden by Frank Watson. But Barrie Farrington was only too content back then to remain silent, even though he must have known full well that money was changing hands at a "higher level" in order for the decision of the BEC Board he chaired to be over ridden by the Cabinet Minister then responsible for BEC (Frank Watson) without explanation of any kind. To put it politely, Farrington has only himself to blame for the "silent" duplicitous role that he ended up playing in the BEC bribery incident that occurred more than a decade ago. Farrington's silence back then has since cost all Bahamians undue hardship in the exorbitant levels of their light bills received from BEC. Farrington's chutzpah in expressing outrage now rings very hollow as he should instead be hanging his head in shame. Farrington himself should be subject to a full blown investigation for not having spoken up at the time the decision of the BEC Board that he chaired was over ridden. QED!

Minnis himself should be crying out for a full blown independent investigation of this BEC bribery incident but, curiously, he has instead chosen to remain ominously silent about the merit of doing so. The great love affair between Frank Watson and the developers of Albany should be looked into at the same time.