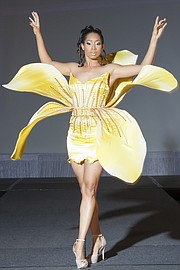 A bright red carpet at the entrance of the Meliá Nassau Beach Resort ballroom transported guests into a world that could have possibly been mistaken for, as Long Island MP Loretta Butler-Turner described it, a New York or Paris fashion scene.

The “Events of a Lifetime” fashion showcase by the Javotte House of Couture and Events sought to honour 10 distinguished Bahamian women.

The show, held on December 21 under the patronage of Bernadette Christie, was a year in the planning and represented “an explosion of talent”, said designer Javotte Bethell.

During the first part of the evening Bahamian women from various sectors of society including the religious, civic and political areas were presented with official plaques and gifts.

Radio personality Stacy Marshall was the emcee, leading the audience through the various transitions of the night’s proceedings, while Phyllis Albury-Garraway, co-owner of the Yodephy Dance & Modelling Academy, was the official presenter.

Then opening the fashion segment of the evening was Julien Believe with his performance of a medley of fan favourite songs.

Julien rocked the packed ballroom with his entourage of dancers that led into the first fashion showcase by international guest designer Marisol Zapata-Higgs, who presented her exotic and popular “Aquarelle” swimsuit collection. Following Mrs Zapata-Higgs’ well-received swimsuit line was a video footage of Javotte Bethell sharing her vision for the concept of the evening and the inspiration behind the collection of 50 pieces.

The first model then took to the catwalk in a fitted yellow dress which was revealed to be a flower petal design. The design celebrated the yellow elder, the national flower of the Bahamas.

This opening piece was then followed by models showing off designs of the same colour scheme and theme.

Part two of the fashion show celebrated another national symbol – the pink flamingo.

In part three, the finale, the designs were interpretations of the alpha and omega, the beginning and the end, and represented “the blood” and “the resurrection”, according to Ms Bethell.

“With every disappointment there was divine intervention,” the designer said. “Sponsorship was very tight and financial support was very limited. Hence, ‘Events of a Lifetime’ is very grateful to companies such as Commonwealth Fabric, E-Blast, Print Masters, 100 Jamz, Les Johnson, the Ministry of Youth, Sports and Culture, Lady Patrice Ellis, The Nassau Guardian, The Tribune, Bahamas Weekly, models, entertainers, family and friends that stepped in to offer (their) kind support and to ensure that the show was a resounding success. Notwithstanding the minor challenges, as is usually the case in doing these productions, we are still gladly honouring our gesture and commitment to put part proceeds from the event to REACH Organisation that promotes awareness for kids with autism.”

Ms Bethell was able to put together the show with the assistance of her team, including project manager and marketing consultant Anthony Smith and project administrator Otalia Whylly.

The night ended with soloist Candice Bostwick performing her rendition of the “Our Father” prayer as winged models walked the runway, representing the angel Gabriel and other biblical figures. Ms Bethell said everything was made possible through Christ who guided her and her team.

Short prom dresses continue to grow in popularity and these sensational designs show you why. Besides, being more comfortable, these dresses can be worn again at a holiday party or prom night, and are easier to dance in. There are a large plenty of dresses with different fabrics and decorations like sparkling sequins or beaded embellishments in order to make the dress more shiny and perfect.

So, which color to choose for your prom? Then I recommend red prom dresses. Red is a bright color and best color to wear on a formal occasion. It could add the elegance to your whole look no matter what the special event is. If you are looking for wearing http://www.popprom.com/Prom-Dresses/2...">Cheap Red Prom Dresses, then these are the ones for you. They are very affordable and pretty and definitely make you charming and cute. The first is the organza red prom dress; it is a perfect prom dress for your prom night. The metallic peacock strapless red prom dress is another choice for you. The embroidery of the peacock is very delicate and fantastic with golden line. It just looks very royal and elegant. The second is the embellished red prom dress; you can choose some sequins or rhinestones and your dress or just focus on the belt. This modest knee length is very beautiful for juniors, seniors and teenagers. Actually, these amazing Cheap Red Prom Dresses are easily to find in online website. You can click your mouse and enter the keywords to pick up one dress you like.

These are several suggestions above. However, it is you to decide what to wear. The dress not only give you a perfect look, but also confidence and happiness. Hope you can find your own dress and have a nice time in your prom!