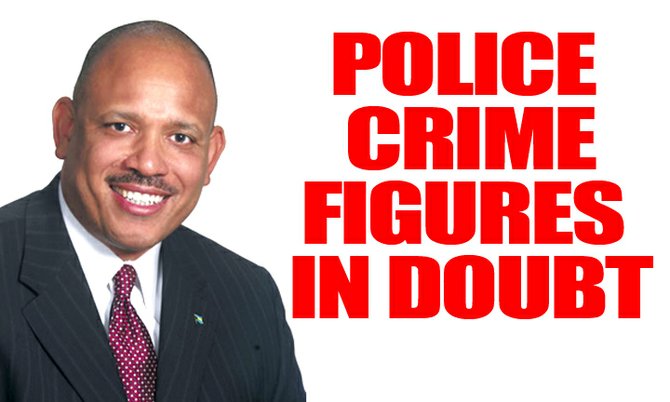 FIVE hundred and nineteen people were shot or stabbed in 2013 according to official Princess Margaret Hospital statistics – yet only 10 attempted murders were recorded by the Royal Bahamas Police Force for the same period.

It is unclear whether the incidents recorded by the Princess Margaret (PMH) were classified as serious or not by the police force.

Nonetheless, the statistical disparities raises questions about the classification of criminal activities and the possible manipulation of crime statistics, Dr Duane Sands, Director of Accident and Emergency at PMH, told The Tribune yesterday.

His comments come at a time when members of the public continue to question the accuracy of crime statistics provided by the police force.

“There seems to be a significant difference between the numbers we presented at the hospital and the numbers reported by the government or the police force,” Dr Sands said.

Dr Sands said police officers often interview patients who were shot or stabbed in the hospital, but there is still no system that ensures such patients are referred to the police.

“If we were off by 10, were off by 20, were off by 30, I would say we could possibly explain it on that basis,” he said. “But when you’re off by several hundreds, now you’re getting into questions about definitions. How are we defining attempted murder? As a physician, I have raised this issue a number of times before. One of the things we believe is that a patient comes in having been seriously injured, say they’ve been stabbed in the heart or they’ve been shot through a major blood vessel in the body, and then when we follow it up at some point in time we come to find out that if the patient does well, the accused gets charged with causing harm. Now, even if that happens as a one off, you would say okay, maybe that’s not too bad, but here we have in 2013, 278 shootings and 241 stabbings and in totality that comes out to more than 500 incidents. Yet in totality (the police force is) saying we have less than 160 murders or attempted murders; somehow that doesn’t add up. I raised the question before as to whether or not the numbers that we have been quoting previously have either by happenstance or deliberate manipulation, led the Bahamian public into thinking that things are rosier than they actually are.”

Dr Sands said physicians at the hospital have complained that the impact of violent crime on providing care to patients has been “unbelievably onerous.”

He added: “I have the greatest respect for the Commissioner of Police and the question I would have to raise would be who has made a decision about how these crimes are listed and is there a desire to have the public believe that things are better than they really are, particularly when the public is saying that they are afraid and complaining that notwithstanding efforts being made, crime is unacceptably high?”

While refraining from saying that police statistics should be completely discredited, Dr Sands said Bahamians should bear in mind that the police force is “not the only source of information in this country.”

“Bahamians should have access to information so they could make up their own mind,” he said.

As a trauma surgeon, Dr Sands said he reviews data about Accident and Emergency statistics every year.

“I don’t think there is any running from the numbers. It’s painful for Bahamians to acknowledge, but it is reality,” he said.

no wait just one cotton pickin minute here...are you accusing the guvment dem of fudging numbers and statistics? No way no how...never gonna happen...they are honest and truthful...just cause ya get stab or shot, man, that's a minor altercation...don't have to list that. It's only when ya dead that we have to MAYBE call it something official.

I call that deceiving the public. Hand guns are illegal, so if someone is shot whether in the arm, leg , chest etc and it is an intentional shooting why not put in on record? Or maybe its on record but they tell us what they want to tell us. Either way its wrong, we are looking for transparency. Shooting is shooting, attempted murder is attempted murder. Unless we have the definition all wrong.

it's not murder, or attempted murder...it is an 'altercation that caused harm'...that way they don't have to list it as serious or violent...

Not surprised by this revelation. Been saying as much for years now.. that they downplay how bad crime is in The Bahamas. The stories of rape, beatings, house-breakings, etc. that you hear on the street and chilling. The majority never make the paper. Question is now that they have exposed the figures, what will National Security do?

You red loyalist to ya Papa, Minnis or Loretta needs get the transcript of Comrade Duane's chat with Darold Miller. What was interesting, more like revealing, were the revelations Comrade Dr. Duane spilled yesterday on the Darold Miller Talk Show's rebroadcast about his own political aspirations to lead the red shirts into the 2017 General Elections. No matter how you take his guarded words, it is still pretty damn refreshing to finally see one honest red who is willing to publicly call for Papa Hubert to stay put exactly where he went after his crushing defeat, in Cooper's Town exiled fisherman's retirement.

Correction. Comrade Duane was on the Jeff Lloyd Talk Show not Darold's Show, as I previously had stated. Should be no reason to have not immediately recognized the higher level of intelligence between the two talk shows.

Didn't hear his whole interview but in the part I heard, Dr. Sands talked a whole lot of sense. He came across well. The country needs his skills as a surgeon but maybe it needs his political leadership more.

I have said the same over and over again. I saw him "perform" for the first time on referendum night and I was immediately impressed by his calm demeanor in front of Daryl Miller and George Smith who were making wild speculations about the outcome. He never raised his voice once though I have no doubt he could when required. The biggest thing I recall about him was how he took time to absorb what was being asked of him, to fully understand the situation before he acted, it didn't take him long to put his response together, but he took that few seconds to think and prepare and then he produced quality. I loved it!!! A Sensible Bahamian in leadership! my God, what a concept! I hope his closets are clean. I have no reason to doubt that they are. I wouldn't for a second question his organization skills, he's just too methodical to be otherwise, but to be thorough evidence of that should be given. I don't know what type of manager he is at the hospital, I can assume that he is respected for his knowledge, his character I don't know yet. But if he has good character, is ethical, knows how to bring together a team, YES, YES, YES.

When I brought this up, a friend said to me he could never win because he has no mass appeal, he doesn't have the charisma. I for one am tired of the charismatic leadership we have in place now. A team of life of the party men. I want level headed ness. I want Joseph in his coat of many colors who could be austere in good times, store enough for the dark times and lead the people through to the other side.

Lol true, true ,true. He would definitely get my vote!

Actually I agree with Honestman. I think Dr. Sands is a good man. If he can get a seat in Parliament I believe he can make a significant positive contribution to our country. I also agree with his statement that the FNM has lost traction on many issues. Dr. Minnis is not taken very seriously and in my view does not quite 'command the troops' like "Papa" did. The FNM needs a serious change in leadership if they have any hope of winning the next general election... and in my opinion Dr. Sands is a very good candidate for leadership!

That leaves you. Save us. Please.

The public has known for some time that the "official" crime statistics are being manipulated and most people will have more confidence in the figures coming out of PMH than from government. The sad thing is that the Commissioner of Police is prepared to stand by the "official" figures and spout the party line that "crime is down". It's a complete joke and everyone knows it.

So we had 509 attempted suicides

Comrade Dr. Duane might me an well educated man but how smart is it to be an advocate for hanging citizens and marching alongside Bran who wants to introduce to Rawson Square public flogging to be administered by a government paid flogger. Will the hangman be offered some extra change to do Bran's flogging? Will Comrades Bran & Duane pose alongside the government's flogger for tourists to capture that memorable Bahamaland moment?

You got me there...hanging is barbaric..must be some other way to get the point across...

Here we are again when for over six months the red shirts Papa Hubert, Minnis and Loretta loyalists have laughed at me for exposing their red party's leadership being too weak to fight even another by-election, much less the 2017 General Elections. No longer can pretend to cry for me by gracing these hereto Tribune's blog pages with their denials of there being no rift within their once so powerful reds leadership. Red ya Bibles cause it talks all about what was going happen to them dreadful reds back in 2012. Oh yes, it right there in big book.

Comrade Tal, at least the FNMs are discussing their future prospects. The PLPs still stuck with the Old Guard................ Go ask the PLP young turks how they feel now.

Get over it already.