Countdown To The Iaaf World Relays 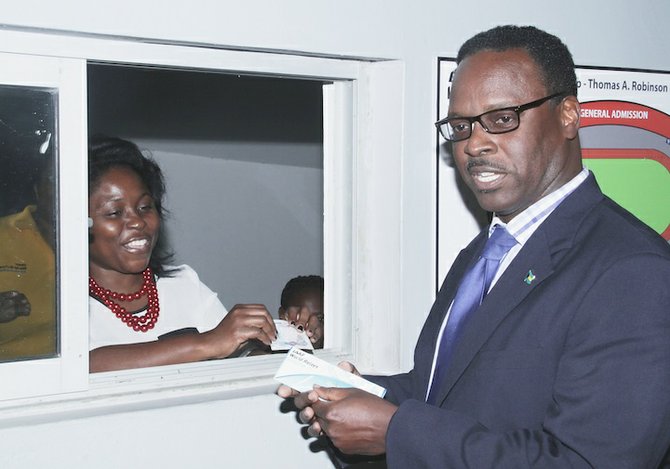 In less than 100 days, the new Thomas A Robinson National Stadium will play host to more than 40 countries, including the Usain Bolt-led Jamaica and a full fledged United States, in the initial International Amateur Athletic Federation (IAAF) World Relays Bahamas 2014.

The countdown began on Thursday with the unveiling of the ticket layout and the official logo during a press conference.

Minister of Youth, Sports and Culture Dr Daniel Johnson, who bought the first two $50 gold seat tickets, said the event promises to be such a spectacular one that it will be better than junkanoo in December. In addition to the gold tickets, the other prices are $35 for silver tickets, $20 for bronze tickets and $10 general admission with children being charged $5 per day.

“It’s the largest sporting event ever to be held in Bahamian sporting history,” he said. “This is the most exciting aspect of all athletic events. That’s why it’s held on the final day of competition at all track and field events.”

As small as the country is, Johnson said the Bahamas was awarded the bid by IAAF president Lamine Diack and his executive committee because of the success of our relay teams at the IAAF World Championships and the Olympic Games.

But he said what is so unique about the Bahamas is that the IAAF gave its stamp of approval to name it the Bahamas World Relays as opposed to the Nassau World Relays as is normally the case for countries who would have been awarded the bid to host events like the London Olympic Games after the city it is held in.

Lionel Haven, managing director of the local organising committee (LOC), said they are pleased to announce that tickets will go on sale as of today at the box office at the stadium 10am to 6pm Monday to Friday or on-line at bahamasworldrelay.org

“We encourage the public to come out early and purchase their tickets in order to get the best seats,” Haven said.

IAAF council member Pauline Davis-Thompson warned the public that once the tickets go on sale, it will go viral around the world, so it’s important for Bahamians to take advantage early and not wait until the last minute to try and get their tickets because they can be guaranteed that they will see some top notch competition.

“Mr (Usain) Bolt is going to be here because him and his collegiate want to bring the world record in the 4 x 200m,” Davis-Thompson said. “And remember our friends to the north of us, the United States of America. In 1999 we beat them, in 2000 we beat them and in 2012 we beat them. They are bringing a full team.”

In a bid to do her part to promote the event throughout the Bahamas, Davis-Thompson said she will be going on a whirlwind tour in Grand Bahama, Exuma, Andros, Abaco, Long Island, Eleuthera, Cat Island and Inagua with the view of exposing the residents to what they can expect when the world comes to our shores.

Having already visited Grand Bahama, Exuma, Andros and Abaco, Davis-Thompson said the islands are very enthused about what they have heard as she has carried the baton made out of the lignum vitae by her former teacher Antonius Roberts.

Family Island athletes will get a chance to be a part of the World Relays when the high schools will be invited to compete in the Test Relay Event over the weekend of May 9-10 in the 4 x 100, 4 x 200, 4 x 400 and sprint medley.

The top eight teams in each event will be invited to compete in the junior programme of the World Relays on Sunday, May 25.

On both days, the competition will get started at 3:30pm and last for one hour before the IAAF World Relay events start at 5:30pm.

In preparation for the relays, Johnson said the Bahamas Government, in conjunction with the IAAF and Mondo, whose representatives are in town now, have embarked on a resurfacing of the track in the new stadium that was built by the People’s Republic of China as a gift to the Bahamian people.

He noted that while the track was the level of class two, they had to replace it with a class one and while the renovations are currently underway, he anticipates that it will be completely ready for the Test Event on May 9-10 when they will have a free-for-all session to iron out all of the kinks to ensure that the LOC can handle all of the logistics in pulling off the relays.

Eldece Clarke-Lewis, who ran on the Golden Girls’ victorious 4 x 100 relay team at both the IAAF World Championships in Seville, Spain and the Olympic Games in Atlanta, Georgia with Davis-Thompson, unveiled the ticketing layout, while director of sports Timothy Munnings unveiled the championship logo.

Additionally, LOC’s director of marketing, Kathy Ingraham-Maciel, introduced the first set of sponsors for the championships. Along with the Bahamas Government, the public institution, the first of six national partners are Atlantic Medical, the Caribbean Bottling Company Limited through Coca-Cola and John Bull.

Speaking on behalf of Atlantic Medical, Darren Bastian said their company believe in supporting the community that they live in and so it’s a pleasure for them to come on board and sponsor the IAAF World Relays.

Jennifer Basden, marketing manager of the Caribbean Bottling Company Limited, said they are also proud to be a sponsor of the event as they show their commitment to the young people and sports in general in the community.

And representing John Bull was Inga Bowleg, director of business development, said the first word she could say is “wow” because when they were first approached by Ingraham-Maciel about their sponsorship, that was the same thing she said then.

This year marks the 85th anniversary of the Bahamian-owned company and Bowleg said there’s no better way to celebrate than being a part of such a huge worldwide event.

The Bahamas broadcaster is the Broadcasting Corporation of the Bahamas and Kalisa Deveaux-Isaacs, their representative, said it will be their goal to ensure that the event gets the kind of coverage that ZNS is known to produce.