'Fishermen Have Right To Firearms' 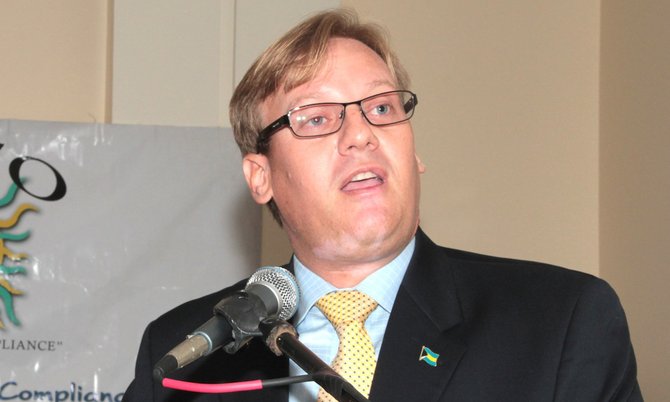 BY LAW, every Bahamian fisherman has the right to carry arms on the high seas in order to protect themselves from Dominican poachers, Elizabeth MP Ryan Pinder said yesterday.

Mr Pinder, who also serves as Minister of Financial Services, made the comments in Parliament following criticism from Opposition North Eleuthera MP Theo Neilly, who accused the government of doing very little to protect Bahamian fishermen from challenges by foreign poachers.

Mr Neilly was responding to Fisheries Minister V Alfred Gray’s recent statement that he would not support all fishermen carrying guns despite their fears of serious harm at the hands of Dominicans.

Fishermen have told The Tribune they are outnumbered and unequipped to deal with poachers who are often armed with spare guns.

Mr Neilly said: “They keep telling me that this is an issue that must be dealt with. The disturbing things these fishermen tell me is the Minister’s recent announcement that they should not carry guns out to sea. Whose side is that Minister on? Whose side are we supposed to be on? Do we really believe in Bahamians or clearly not just Bahamian fishermen?”

Mr Pinder accused Mr Neilly of attempting to mislead the Bahamian public by painting a picture that the government had changed the laws placing them in an unfavourable position.

“Mr Speaker, there is no change in law by this government to disallow fishermen from arming themselves and having duly licensed firearms on their vessels. That was the law of the land yesterday, (it is the law) today and (it will be) tomorrow,” he said.

Two weeks ago, 40 Dominicans suspected of poaching off the coast of Andros were apprehended. Three others evaded capture.

According to Royal Bahamas Defence Force reports, the Dominicans, along with their fishing vessel, were taken into custody for illegally fishing in Bahamian waters.

The Dominican vessel was intercepted approximately 75 nautical miles south of Andros with several thousand pounds of fish on board.

In January, almost $100,000 in fines were collected from the captain and crew of a Dominican vessel who were arrested for illegally fishing in Bahamian waters in December.

During that apprehension, 17 Dominicans were caught, but 33 others got away after the group of 50 were spotted poaching near Cay Lobos just off the Great Bahama Bank.

Wow...they are holding a quarter million dollars in fish in our waters and we fine them $100,000.00?? Fine them 5 times the value of their illegal catch, confiscate the vessel and JAIL the captain for 5 years! We need to send a clear message to these thugs that we will throw the book at them for this nonsense!

Don't have time to read BS. If that's Alfred Gray's stance on what our fishermen are faced with, then he's simply another JACKASS! But i blame the dumb ass Bahamians that vote, and continue to vote these spineless guys into office

The news will get back to the DR in a hurry. Then who will have the trump card??????

Mr Speaker, there is no change in law by this government to disallow fishermen from arming themselves and having duly licensed firearms on their vessels. That was the law of the land yesterday, (it is the law) today and (it will be) tomorrow. Once again a bold face lie from the PLP . They just raised the gun license from 50 to 150 for a shotgun and from 100 to 300 on rifles to try take the guns out of law abiding citizens. And if apply for anew one the will simply turn it down

Totally support the fisherman being able to defend themselves while out at sea. It's not like you can just call 919 and wait for half an hour for someone to answer the phone and another couple hours for the police to turn up...these guys could be DAYS before anyone even knows they've been shot or killed.

The RBDF should take the catch, remove the crew and either sink of burn every illegal vessel caught in Bahamian waters. Let this be known to The Dominican or any other country where these poachers come from that this will be the beginning of penalities followed up by jailing or fining each crew member $50,000.00 and the captain $250,000.00 for first offenders, thereafter fines will double.

This is a no-story; at least not to lead with. Why is the Tribune pushing Ryan Pinder?

Societies which deny their citizens their right to keep and bear arms increase crime by empowering criminals to prey on defenseless, disarmed citizens.

Societies which recognize their citizens their right to keep and bear arms enjoy low rates of crime because criminals are reluctant to prey on armed citizens who can defend themselves.

Well..you are allowed to own shotguns and rifles for 'hunting purposes'...guess they are just hunting wayward poachers!!

We just slack and corrupt when it comes to our sovereign waters............ period