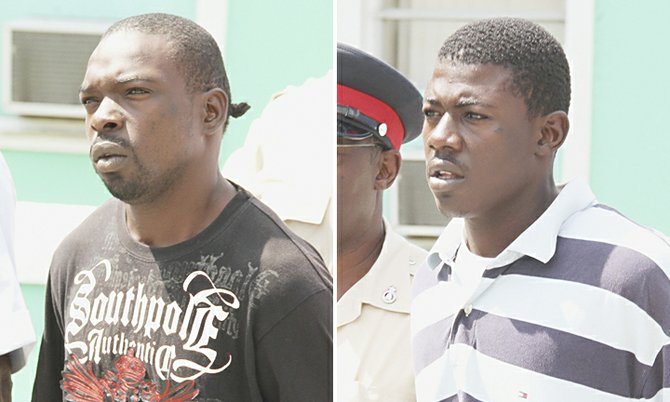 LAWYERS for two men facing murder and armed robbery charges expressed fear for their clients’ lives yesterday, when they were arraigned in connection with a recent murder in Exuma.

Dimitri Rolle, 27, and Giordano Rolle Jr, 18, both of Ramsey, Exuma, stood before Magistrate Andrew Forbes on the two capital charges alleged to have been committed on February 18.

It is claimed that the two, while armed with a handgun and shotgun, robbed Dwayne Finniken of cash, a gold neck and a hand chain before killing him.

Finnikin, also known as Dwayne Nixon, was at home along with another man, when two men armed with firearms entered the residence.

One of the men shot the victim several times before they fled on foot. The 23-year-old was pronounced dead at the scene by the island’s local doctor.

The pair were not required to enter a plea to the charges due to their nature were told by the magistrate that the case was likely to be fast-tracked to the Supreme Court for trial through service of a Voluntary Bill of Indictment.

Before Magistrate Forbes could set a date for a fixture hearing before Chief Magistrate Joyanne Ferguson-Pratt, attorney Krysta Mason-Smith made claims of police brutality against her client, Giordano Rolle Jr.

She claimed he was beaten while in custody in Exuma and in the capital, and was forced to sign statements against his will.

She also claimed that his family had been receiving death threats from the prison, saying: “if he is placed anywhere in maximum security, he is dead”.

Mason-Smith noted that, while her 18-year-old client is legally an adult, she asked for him to be seen by a physician and then for the court to make a note so the authorities at the prison could seriously consider the threats.

Michael Kemp, who appeared for Dimitri Rolle, said he “maintains the same sentiments and holds the same fear the attorney Krysta Mason-Smith has said on behalf for her client with respect to mine.”

“He’s been told they’re waiting for him,” Mr Kemp claimed.

Magistrate Forbes said his court had no authority to direct the Supt of Prisons where to accommodate its prisoners but would make recommendations regarding both requests.

The men, who were remanded to prison, are scheduled to reappear in Magistrates Court on March 10 to learn the date when their case would be forwarded to Supreme Court.