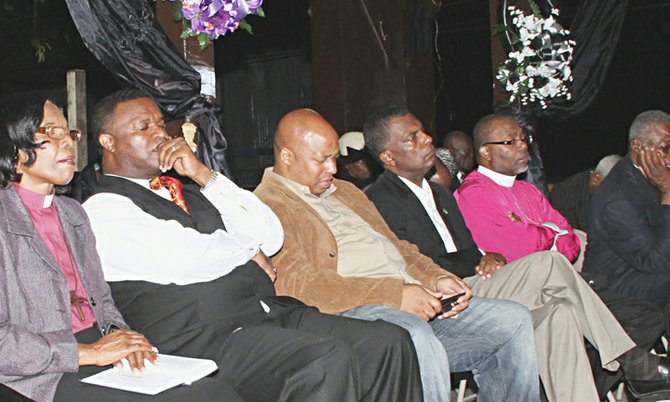 FOX Hill MP Fred Mitchell has welcomed the government’s new crime initiatives as the right approach following the mass shooting in his constituency.

Speaking on Tuesday, Mr Mitchell said the plan will take effect immediately, beginning with the clearing overgrown lots as part of a sustained clean up to ensure criminals “have no hiding places”.

He said: “I believe that we can praise God and pass the ammunition at the same time. This is the best strategy – pray but hit back hard. Fox Hill expects no less.”

Mr Mitchell extended thanks to psychologist Dr David Allen and a number of other social agencies for their quick response and efforts to help the people of Fox Hill, particularly the young people of the Original Congoes Junkanoo group, cope with their fears and grief following the deaths of their friends.

“We thank the pastor of the nation for rallying round the people of Fox Hill,” he added. “Bless you all.”

Meanwhile, Bradley Roberts, chairman of the governing PLP, said he fully supports the government’s strategy to “escalate the war on crime”.

He added: “I appeal to the Bahamian people to adopt an attitude of zero tolerance towards criminality and to place all hands on deck in this fight in a spirit of love, unity, co-operation and shared sacrifice. This fight can be won, but it requires a national co-ordinated effort as we beat back this scourge by a lawless minority; we must do so one street at a time and one community at a time.

Mr Roberts also hit out at leader of the Opposition Dr Hubert Minnis, who criticised the new plan as “vacuous”.

The PLP chairman reminded Dr Minnis that he sat around the FNM cabinet table for five years approving a crime strategy while the murder rate doubled.

“He had no plan of any effect or worth when he held all of the executive powers to put a dent in this scourge, but he and his colleagues left the country in utter chaos and in crisis. Now in opposition, he still has no plan for crime so he takes the easiest and laziest route which is to distract the government by standing on the sidelines and criticising and hiding in the tall grass and throwing stones,” Mr Roberts said.

Another serious crime fighter has spoken. FM wants to replace PC a.s.a.p., so he must present himself as serious about crime. I suppose,now that he has brought all the foreign investment into the country,and has brought illegal immigration under control,he can concentrate on crime

"...will take effect immediately, beginning with the clearing overgrown lots as part of a sustained clean up to ensure criminals “have no hiding places”.

Is he serious? More bush cutting??? What are these people thinking about??? These people did not run into a bush to retrieve a weapon, the came in a CAR !!! Perry ?Christie needs to use the head only his shoulders and weed out the utter foolishness being proposed. this asinine strategy only makes sense if someone is benefitting on the side from ll the money being funneled through the UR BUSH CUTTING PROGRAM..

If we would tolerate "criminals" who smoke weed, and do a little gambling - by legalizing those acts - then their source of funding would dry up.

Of course, maybe then we need to worry about where they would get funding from. Would they then resort to kidnapping as a means of getting money? (of course they won't hold down a job, so it has to be something else).

Christie, Freddie and all these brown nosing religious leader clowns will pay the price for standing around talking absolute stupidity.

What a load of deep, stinky, malarkey!.....Nothing will change.

Murders and mass murders will continue because this balls-less group of jackass's in bad suits and stupid clothing have their heads so far up their collective crooked ass's they are unable, and defiantly unwilling to ADMIT REALITY and acknowledge the relationship between 40 years of political stupidity, educational failure and illegal immigration.

The chickens dem done come home to roost BOYS........What ya gonna do now?

Well I am amazed that the so called pastor Mario "Anti Gay" Moxey is sittin right next to someone whose lifestyle he so strongly speaks against in his sermons. He was one of the leaders in the march against allowing gay cruise ship passengers from entering Nassau port. Now he is sitting right next to someone who supports the very thing he despises. These dam hypocrites are amazing!!! This is exactly why this country is so messed up. By the way, I am not gay bashing here, I am hypocrite bashing.

The proof is in the pudding.

Zero tolerance for crime ... what a joke ... let's see how serious you are Fred ... start with the numbers boys and work your way over to the white collar theives who rape and pillage this country ... then target the drug dealers and murderers ... oh, I forgot the numbers boys finance your party so deh ain criminal ... das right.

Here we go once AGAIN the political bosses are bashing the opposition because they called a "Spade a Spade." It is high time to stop your political foolishness and attack the problem. Remember, "Nero fiddled while Rome burned." And when I think of burned I am reminded of the tragedy in one of the family islands on New Years eve where lives were lost in The slum of an illegal Haitian shanty town. Why is it that after such incidents the government of the day swears by their grandmas underwear that there will be no more buildings allowed. I will bet you 100 to 1 within three months not only will the homes lost be replaced but additional ones will be built. Read on FB that a volunteer fireman was attacked by some of the residents because he would not turn the hoses on their house instead of what he was doing. Will anyone be charged or deported for this incident? It is high time to round up the illegals and send them packing to their homeland.