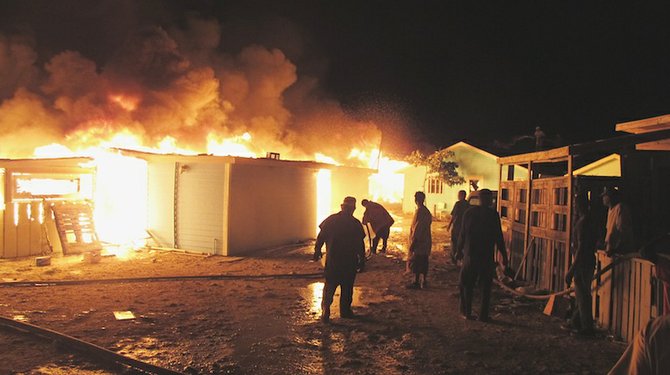 THE government has started discussions with the owner of the private property razed in the tragic New Year’s eve blaze in an Abaco shanty town, North Abaco MP Renardo Curry confirmed yesterday.

More than 200 fire victims, processed as displaced residents of the Pigeon Pea settlement, trickled in for government assistance.

Despite assurances that there will be no deportations in the densely populated immigrant settlement, officials yesterday explained that victims were still reluctant to come forward due to fears over legal status.

Preliminary directives are to secure the property to prevent reconstruction on the site, according to Mr Curry, who said that the government’s focus was prevention.

“Moving forward we are focused on prevention,” he said. “How do we prevent something like this happening again? The government is spending mass amounts of revenue dealing with issues like this, to assist persons in those areas, and that can be prevented. “From our own personal investigation, there are great environmental concerns that need to be addressed immediately. The thrust in New Providence on shanty towns, it’s going to be extended to the Family Islands as well.”

A mother and her son died in the blaze that started in the Pigeon Pea area in Marsh Harbour sometime around 9pm Tuesday.

According to sources in Abaco, because of the proximity of the homes in Pigeon Pea, firefighters had to fight the fire from the outside.

It took them nearly six hours to completely extinguish the blaze.

Last night, officials were still deep in investigations over the cause of the fire and still could not give an exact toll of the devastation.

Mr Curry said: “We are still in the preliminary stages, we think it’s about 50 to 60 homes that have burned down, and an estimated 300 to 400 persons have been displaced. Only about 200 persons have come forward so far, and we have provided housing by the Catholic church for the time being.

“We still don’t have an exact count, still doing investigations. The community is very tight lipped, they’re concerned about a setup, and immigration coming in and taking people away.

Looks like an ideal opportunity to get rid of the shanty town.