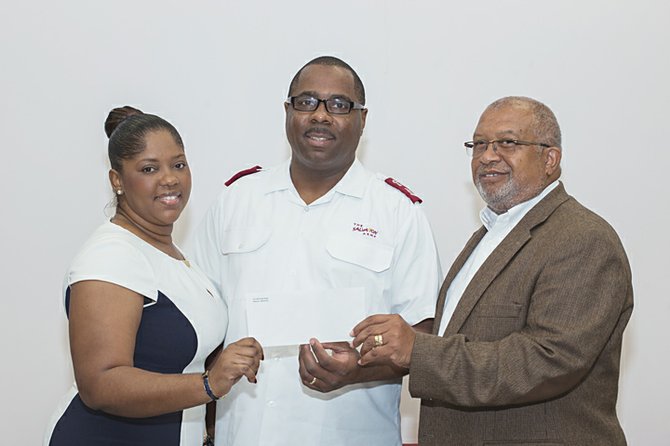 IT BEGAN with a simple plea from Anthea Cox, vice president of human resources at Commonwealth Bank – let’s reach into our own pockets and raise funds to make life a little brighter for the less fortunate.

The idea caught on and staff donations poured in.

Executive management threw out a challenge: raise a minimum of $5,500 – $10 per person for every single employee in the Commonwealth Bank family – and we will match whatever you raise.

By the time it was over, an idea born out of wanting to help the less fortunate had turned into a reality, raising $11,200 – enough to help the Salvation Army and Great Commission Ministries feed hundreds of people and provide food packages to go.

Each organisation received a cheque for $5,600.

“We think of hunger as something that exists in far-off places, but the tragedy is that it exists right here in our midst where it is too easy to overlook or ignore,” said Mrs Cox. “When we were going into the holidays with visions of heaping plates of turkey and ham and all the trimmings, some of us kept thinking, what about all those people who will go to bed hungry? We just wanted to help and we knew organisations like the Salvation Army and Great Commission Ministries have been feeding these people for many, many years. We wanted to make sure they knew people cared enough to help.”

It’s been estimated that 900 people a day in New Providence would go hungry if it were not for the Salvation Army, Great Commission Ministries, the Bahamas Red Cross and other feeding programmes organised by churches, soup kitchens and even the kindness of individuals who serve food from their own home without fanfare.

In December, the extent of hunger in the Bahamas was made more poignant by the creation of the Bahamas National Feeding Network, a network of some 14 non-governmental organisations dedicated to feeding the hungry.

“We are extremely grateful to Commonwealth Bank for its ongoing generosity,” said Major Lester Ferguson, Salvation Army divisional commander. “This has been a very rough year and often the hot meal that many of these people get at our Mackey Street or Bain Town facilities is their only meal of the day so these funds will go a very long way.”

The bank with branches in New Providence, Grand Bahama and Abaco is known for its corporate social responsibility with most of its contributions going toward education and youth development.